One day in downtown Philadelphia, where once again the parental need to force Greta to view the major monuments of colonial America asserted itself.  Different cities have taken different approaches to this heritage.  Boston does it really well – with the exception of the Paul Revere Mall, the historic sites are still imbedded in the city.  New York more or less obliterated all the historic sites and their surrounding context.  Philadelphia kept all the historic buildings, but obliterated the city fabric around them, so you can view these icons as isolated objects, surrounded by pointless, overscaled open space and dreadful overscaled buildings.

I remember Independence Hall as a wonderful building.  It is not only important, but it is beautiful and says something about the city of the time.  The problem is this:  you can’t get anywhere near it anymore, without signing up for a tour over in the dreadful visitors’ center and waiting around to be shepherded through with throngs of tourists snapping iPhone photos.  You can’t even walk on the grounds near it, having to detour around the block.

It gets even worse when you step back.  The Independence Hall Mall was proposed in the 1930s, and was implemented in the 1950s, when we thought knocking down old cities was a great idea.  Hundreds of buildings were destroyed, so that a giant open space would allow you to view Independence Hall from far away, looking puny and unimportant.

Then big, bombastic buildings were built around that, symbolizing the might of large corporations in our national system.  It gets even worse behind Independence Hall, where this sterling example of historic preservation can be seen.

It declined further recently.  In 1976 the Liberty Bell was moved into its own viewing pavilion, part of a veneration of the minor icons of our history rather than the history itself (the recent Star Spangled Banner re-installation at the Smithsonian is another example of this).  But then this simple pavilion was destroyed (probably because it was modernist and minimal), and replaced by a more grandiose pavilion, just south of the visitors’ center.

The experience is awful, reminding me of what has happened to Mt. Rushmore.  Where does this impulse come from, to remake everything in a phony, pretentious manner?  (By the way, some very good architects and planners were involved in many stages of this madness – Edmund Bcon, Dan Kiley, Venturi and Scott Brown, Cywnski, Laurie Olin!)  Philadelphia was not Versailles, but it had one of the most compelling plans of an early American city. Why can’t we leave it alone, and let visitors have an experience that in some way might evoke the 18th or 19th century, helping them to understand life in that era, rather than pedantically shaping their perceptions?  Boston looks better and better in this regard.

Luckily, the architects did preserve one of the best features of the earlier Liberty Bell pavilion – a window through which it could be seen, without going through the rigamarole.  We took the picture and got the hell out of there.

Once you get away from this, Society Hill and other older neighborhoods of Philadelphia are spectacular.  There are crazy renderings of the founding fathers,

fantastic Greek Revival buildings by Robert Mills and others, 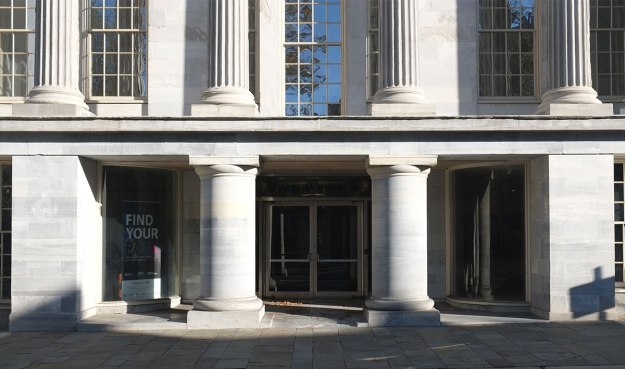 and streets which really maintain the experience of the 18th century city.

The Ciry Hall is magnificent, a good example of how a city plan can evolve positively. There was no building at the center point of the city in Penn’s plan, but having this icon visible on the axes works beautifully (with sculpture by Alexander Calder Sr.)

The Paul Cret Federal Reserve is fine (Cret being an employer of Kahn).

They seem to be having more fun at the Pennsylvania Academy these days, I think Furness might have approved? 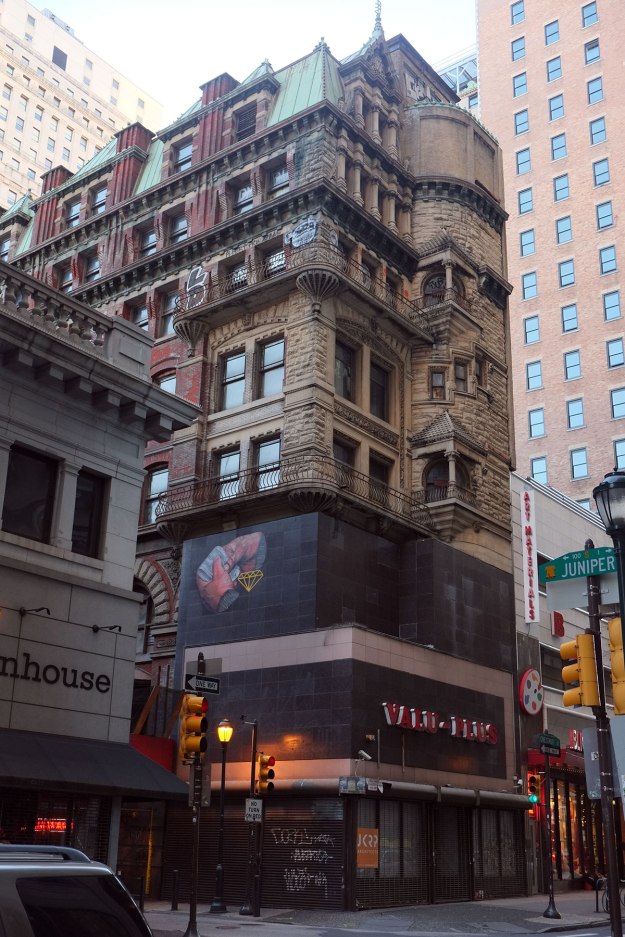 and some fine urban buildings and juxtapositions

As we were into checking things off our list, we grabbed a random cheesesteak, but not being in the right neighborhood, it was nothing to blog about.