We had heard two things about Austin before we got there – it is the cool, hip place in Texas, and the traffic is terrible.  After being surprised by Dallas, and horrified by Houston, we were prepared to love Austin.  So we were again surprised, finding it to be basically a good, big, fairly typical American city for its size, but one that didn’t wow us in its physical attributes.  On the other hand, clearly it is the place in Texas where you’d want to live.  The people are interesting, and the neighborhoods, restaurants and ambience are cool.  There are just a few parts of it you have to avoid, such as everything connected to the state government, and the UT campus. 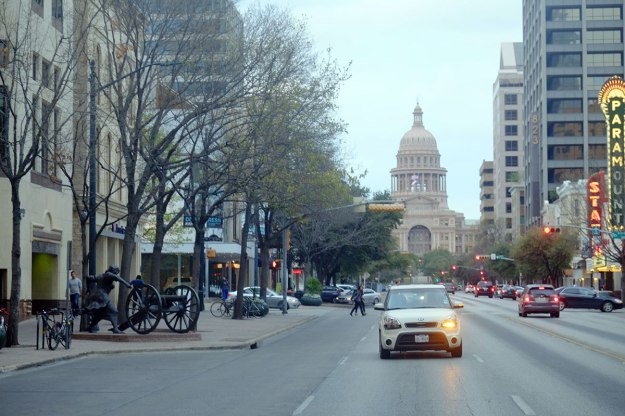 Compared to Houston, the downtown is a wonder.  It is a good mix of early 20th century commercial buildings, stores, new offices, yuppie towers,

nightlife districts, etc.  There are people on the streets, even on the weekend.  They didn’t demolish their city, and it is big and varied enough to accommodate changing needs and cultures.  It just didn’t strike us as very interesting physically – no especially beautiful buildings, or urban spaces, just good, solid, 20th-century, American gridded city fabric.  It reminded me of Raleigh, or Buffalo (but without Buffalo’s great architecture).  Greta and I have gotten pretty blasé about typical American downtowns, and we can usually knock them off in a couple of hours.  So we did that in Austin and moved on to look at the more atypical parts.

The state capitol is probably what we should have expected.  Very, very big compared to other state capitols, highly derivative, and not especially interesting.

It looms over the town on its hill, reminding Austinites of the power of all the crazy people in Texas.

The interior has some points.  Again, it is all very big , beaux-arts rational, and impersonal, with long hallways

and a really big dome 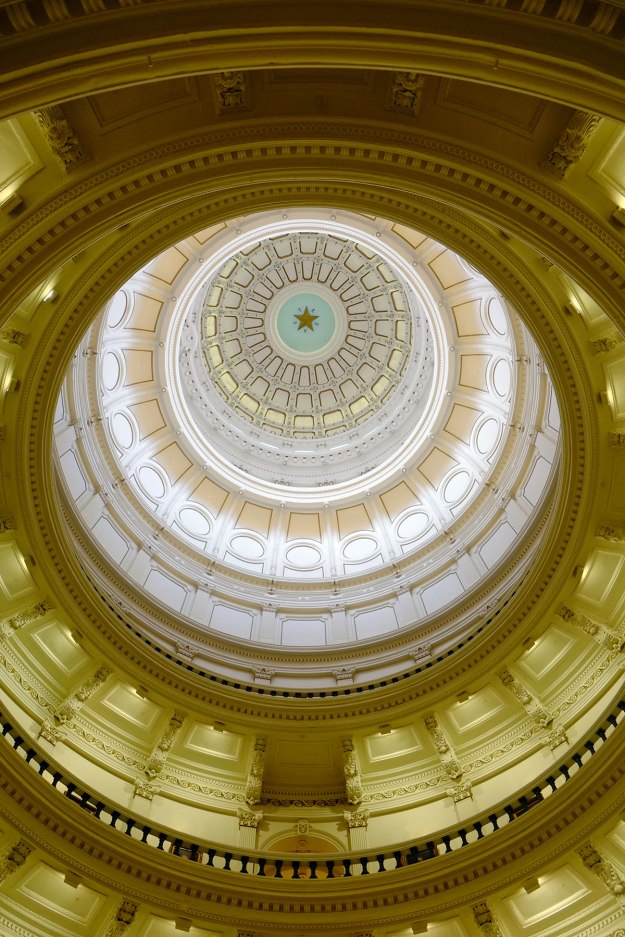 where the high points of Texas politics are immortalized. 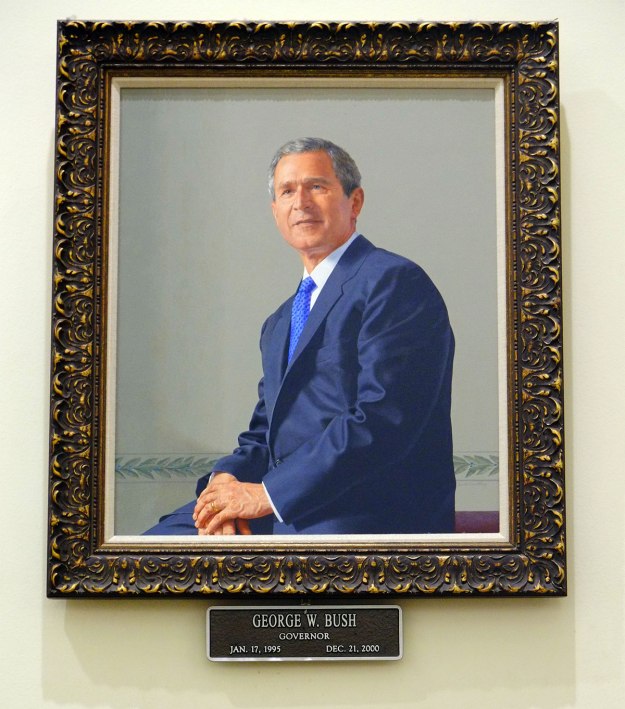 The legislative chambers match the rest of the building in their size and mediocrity,

but are worth visiting to see these two paintings, which depict the battles of the Alamo and San Jacinto.

Painted by Henry Arthur McArdle, they are truly two of the biggest, and most ghastly (in both subject matter and aesthetics) paintings in the world. 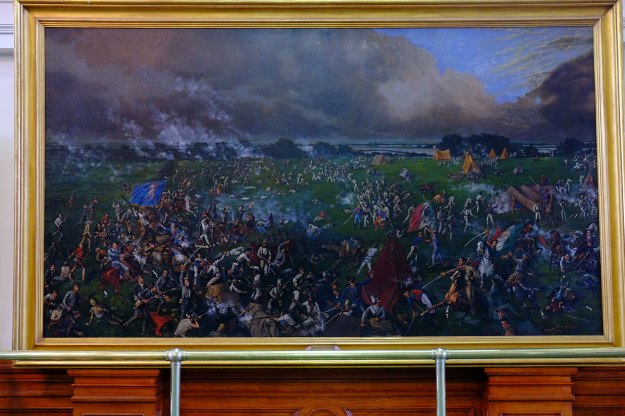 I considered trying to count the number of dead or soon-to-be-dead bodies in them, but we didn’t have the time.  McArdle is the Hieronymus Bosch of Texas, without the talent or subtlety.  I have never seen such a detailed depiction of mayhem and gore, and you start to understand the Texas mentality when you see these depictions of its foundational mythology.

Being a giant state, Texas has a giant state government, which spawned a vast district of banal bureaucratic boxes, typical of most state capitals.

It doesn’t have the fascination of the disaster of Albany, and it makes one yearn for the wisdom of Annapolis, where they kept their beautiful capitol and pushed the bureaucracies out to the edge of the city.

The capitol grounds are a weird agglomeration of formal landscape and a plethora of monuments.  A really stupid one to the Children of Texas – you can imagine the degree of political pandering which brought such a piece of kitsch into existence. 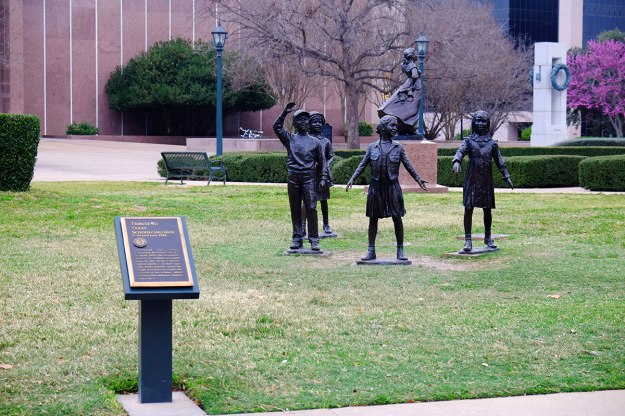 But my favorite was this – a monument to a removed monument.  Again, political pandering to the forefront, unwilling to offend a minor constituency (the Austin Lawyers Wives’ Club) in the tiniest way.

It’s clear that the physical environment barely registers with these people – they are politicians, and all other realms are just instrumental in their service to politics.

The University of Texas campus was also a huge disappointment.  It sits further uphill from the capitol, along a not-quite-straight axis.

It is huge, with around 50,000 students, and the central campus is pretty dense by American standards.  The buildings are again big and banal, and the open spaces are devoid of charm.  The Main building (the famous tower from which one of our first mass shootings was perpetrated in 1966) is dreadful.  Designed by Paul Cret, who has a good reputation (which may be derived from his having employed Louis Kahn), it is an eclectic pastiche, 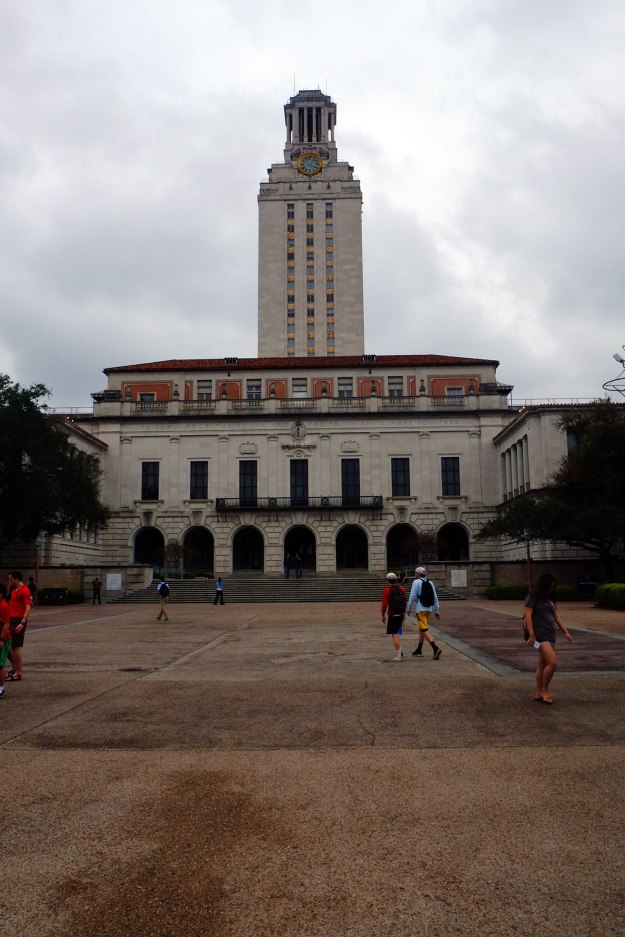 that brings Moscow University to mind.  It is the worst thing on this campus, so in balance, this may be the best:

But they point out the common problem of the campus – everything is in the same mostly Neo-Renaissancey, a little Missiony, ponderous, style.  Just as the Capitol is meant to manifest the Power of Texas, the campus is meant show that this is a Serious Institution of Higher Education;  take that, all you snooty East Coast schools, we have a bigger endowment.  It was oppressive and devoid of life.

So what did we like in Austin?  The neighborhoods.  Austin is a really weird place – you have the presence of a truly regressive state government.  You have a big grandiose university.  And somehow a hipster and yuppie community has sprouted here (probably grounded historically in the student population), which is known for its music, food, nightlife, progressive politics, etc.  Austinites must have signed a mutual nonaggression pact, otherwise I don’t know how they can all co-exist in this place.

We cruised through what was obviously the old, expensive neighborhood on the hill to the west side of downtown.  Mostly stately and restrained, but with some nice little apartments mixed in. 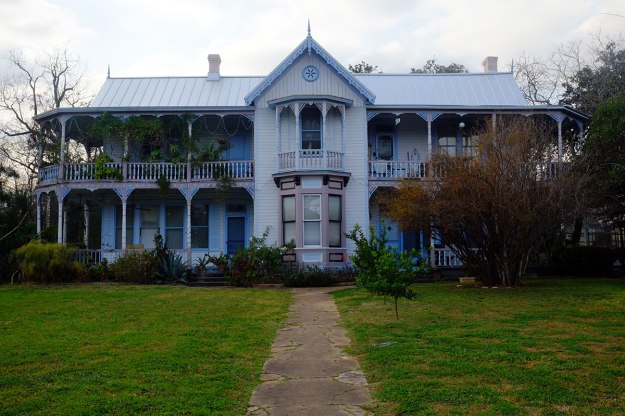 Roberto’s neighborhood on the south side of the river was really fun.  Very casual and funky, with some places bizarre even by Eugene standards. 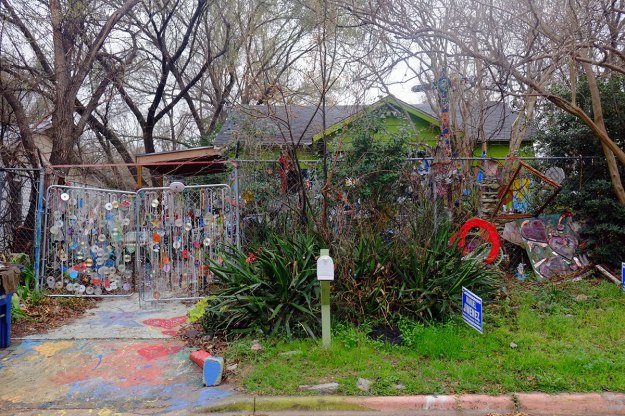 We liked the anarchic quality, which extended to houses with vast armies of unconfined dogs roaming the streets.

We also checked out the East Side, which is another funky place in the process of gentrifying.  This is the part of Austin with the Portland vibe – street carts, bikes, old houses, Bernie Sanders headquarters, expensive new infill, etc. 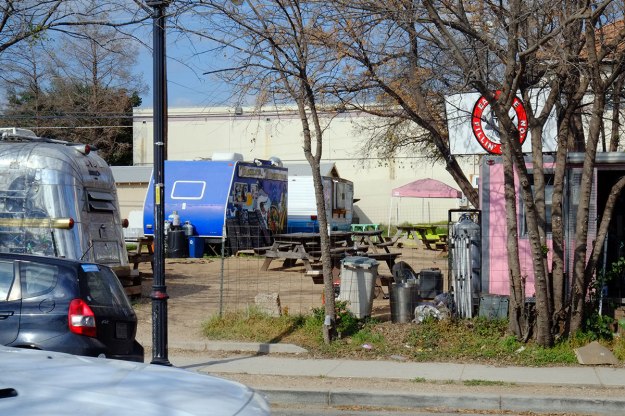 I went to Birds hipster barbershop, where I got my choice of canned beer with the haircut.  (I appreciated this, as I had missed getting my hair cut in New Orleans at the bar in the Marigny which offered a haircut with a shot for $10 on Monday nights.)

These two new buildings will enter my curriculum as providing the clearest illustration of the differences between Ducks and Decorated Sheds.

Austin is a city about which we were wildly ambivalent.  There is the part of the city which is a product of the power of the state, which is big, pretentious and boring, designed mainly to awe.  There is the downtown, which is solid and good, but nothing to write home about.  There is the sprawl (which we almost completely avoided), which is probably like the sprawl everywhere else, and which must account for Austin’s bad rep on traffic. (We found it to be like Portland here too – if you go out to the periphery, the traffic is hell, but if you stay in the core of the city, it’s fine, as everyone takes Über.)

Then there are the people, the food, the music, the lifestyle.  This was all very familiar to us, feeling much like Portland or a big-city Eugene.  I ended up thinking about Austin much the same way I do about Eugene – it’s not the most exciting place to visit, but I’d like to live there.