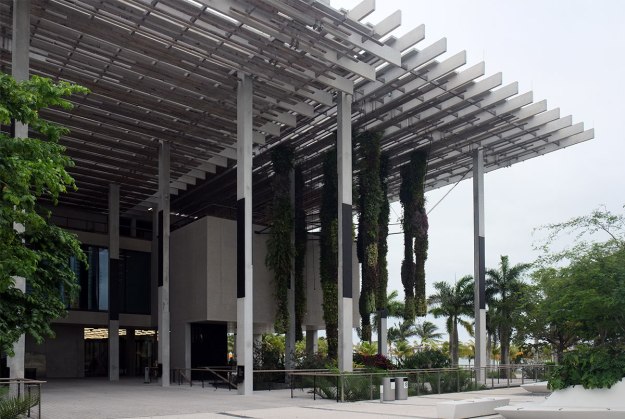 Sometimes it seems that Renzo Piano has designed every new museum in the US in the past 20 years, but then we come across some places that have resisted the hegemony.  However, even in these non-Piano buildings, you can see how he has shifted the conversation.  We’ve visited a lot of new museums on this trip, and in general, I think there is a much greater emphasis on the clear expression of the buildings’ systems (often with exquisite detailing), and less emphasis on look-at-me form-making, starchitect branding and spatial gymnastics than there was in prior decades.  The new buildings have great conceptual clarity, but this hasn’t been at the expense of being good museums for displaying art.

Herzog and de Meuron’s recent Perez Art Museum in Miami follows up on the success of their parking garage in South Beach, which highlighted their ability to work with structure and space, eschewing the intricate screen facades for which they were known.  The Perez Museum continues with this approach, with a parti where the articulation of the elements of frame, roof, box and plane are the basis for the scheme.  In the photo above, the roof/trellis floats above the whole building, supported on tall columns.  (We wondered if the metal plates visible at the middle of the columns are external steel reinforcement, allowing for an extreme slenderness ratio that otherwise might cause buckling.)  In the shadows under the roof you can see one of the concrete box galleries poking out.

The beautiful parking garage is under the main floor plate, which has tightly-spaced precast joists and a thin slab.  There are stairs, ramps, and stepped terraces which connect the plinth to the ground plane at a few points.

There are some excellent details at the stairs – a few ways to differentiate the conditions: 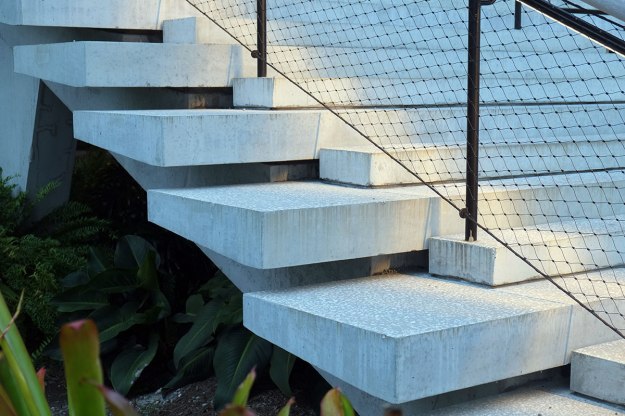 On the side towards the water, the roof creates an enormous shaded porch with views out.  The roof structure is used to hang all sorts of growies, mimicking the Spanish moss / jungle atmosphere we’ve come across in many places, but which do somewhat resemble gigantic Chia Pets. 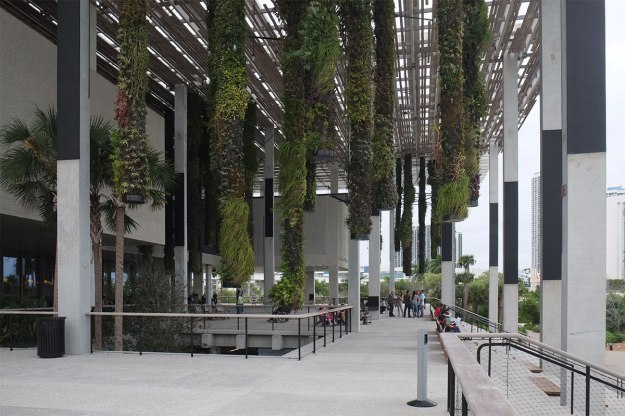 And one can watch the life of the city and the port go by.

The ground floor is mainly glass, with a solid wooden box for the entry.  The parti element of solid box gallery rooms is visible, and the gallery spaces between the boxes are the gaps where the interior space can connect out to the cityscape.

The general impression from the exterior is an almost Japanese timber-frame approach in precast concrete, with layering of structural elements.  The roof reminded me of Kenzo Tange.  The boxes and spaces under a huge roof is an approach seen before, even back as far as Pietro Belluschi houses.

Moving in from the lobby, the distinction between the concrete boxes and the partition walls in the open plan can be seen.

There are galleries on the main floor, but most of them are one flight up.  To reach that level, you climb up this monumental stair, which also functions as the circulation for a presentation/lecture space.

From above you can see how the auditorium can be tuned and curtained off.  In section and in function it is similar to the Seattle Public Library, where the auditorium space isn’t isolated most of the time, but open to the passer-by patrons.

There are open gallery spaces between the boxes

and a clear way of making an opening into a box 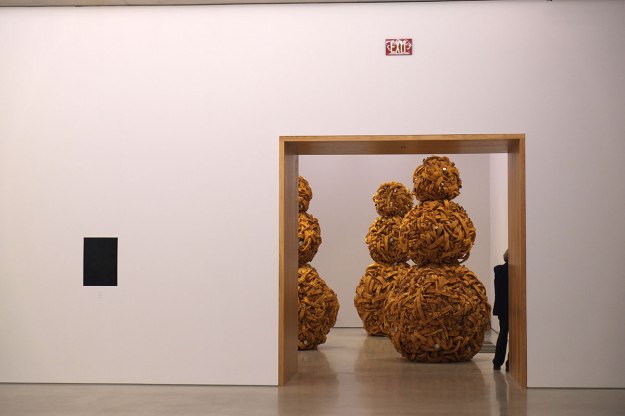 The rigor of this approach is pretty consistent, although there are some places where the detailing seems a little fudged – boxes dying into the concrete floor slab above, but screen walls doing the same.  This may be a matter of budget or convenience – it is easy to pull a screen wall way from a box for a reveal in plan, but not attaching the wall to the slab above presents structural problems.  (I may be more focussed on this after a visit to the Kimbell yesterday, where the articulation of these issues is rigorous to the nth degree.)  But it does make me wonder whether we would even be thinking about these issues if Mies had jus let the wall support the roof in the Barcelona Pavilion.  (This issue will resurface with some subsequent posts.)

There are some interesting juxtapositions of the art and architecture:

and a gallery which opens up to the third floor of offices, where a site-specific installation occurs.  I was looking at this and a museum guard offered me a lengthy handout on the piece.  I looked at it, but said that I had a problem with art that needed three pages of explication to be understood – if the piece can’t speak for itself, what’s the point?  This triggered a reminiscence by him of his earlier days studying art with Norman Rockwell and how he learned to really draw, and how a lot of the conceptual stuff he sees now makes no sense to him.  I’ve been thinking recently about the particular hell of being a classically-trained artist who spends his days surrounded by contemporary conceptual art.

And no piece on a Herzog and de Meuron museum would be complete without a photo of the sublime rest room.  This one is similar to those at the Walker addition in Minneapolis, but somehow not quite as transcendent.  I think it may be the contrast with the dark color, whereas the Walker is all white and more ethereal, an unusual  feeling to have in a public bathroom.

The art was interesting, but not overwhelming.  Except for a show of paintings by Australian Aboriginal painters, which was spectacular.  I have a new artist on my favorites list:  Tommy Mitchell, who died a few years ago.  He didn’t start painting until he was 65. 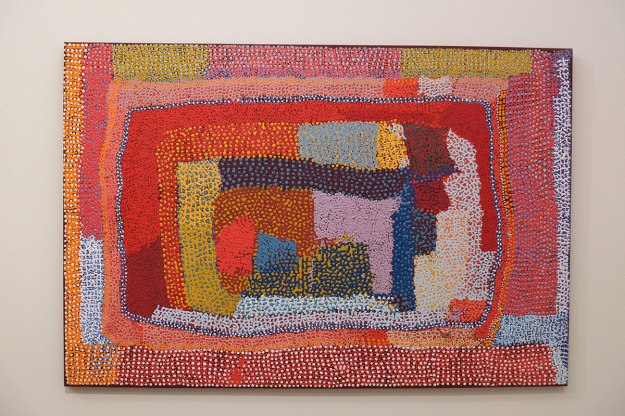 Overall, a building in which the articulation of the elements is striking, especially on the exterior.  The gallery spaces are fine, but not extraordinary.  And sometimes, the curators must be making an effort to make sure the artwork is well-integrated with the architecture.