It’s been a long, difficult and challenging year, but we finally got around to dusting off the trailer for a trip to the Oregon coast. Our spring term at the university was all online during the pandemic, teaching large lecture classes and thesis studios (with up to 30 hours per week on Zoom).  After we revived from our post-spring term collapse, a lot of time this summer was taken up enabling summer living here – this was  our first summer in Eugene in 15 years, after selling the house we built on Whidbey Island last summer.  We built large cedar-framed screened panels and doors, outdoor furniture, caught up on a backlog of yard work, and established a plot at a community garden that fed us all summer.  The outdoor living allowed us to resume some socializing, with our ATTV (all-terrain television) supporting socially-distanced movie nights with friends.

But as summer began to wane, we realized it was our first summer ever without being by the ocean.  The reported day-tripping crowds to the Oregon coast had kept us home during the pandemic, but as the forecast for the week after Labor Day was for temperatures reaching 100º for the third time this summer, we made some reservations at Oregon state parks, and took off.  Oregonians are not notably gregarious, and we figured we could stay in our own bubble if we were camping.

We plotted our route north from Eugene on Territorial and other minor roads, tight up against the Coastal Range on the west side of the Willamette Valley.  It was a beautiful drive on a sunny Labor Day, through farmland and small towns until Dallas, where we turned onto Route 22 through the mountains to the coast.

Our destination was Cape Lookout, one of a series of rocky capes that project out into the Pacific – this one about 2 miles.  We stayed in a wonderful campground in the trees just behind the dunes, with a beautiful beach right there for walks along the Netarts Spit..

This might be a good point to explain the repetitive elements and nomenclature of the Oregon Coast to those who haven’t been there.  There are a few basic classes of things:  cities & towns, rivers, capes, bays, beaches, spits, and rocks.  Each of these is named independently, usually without any reference to adjacent things in other classes, and in keeping with the general Oregon practice of having three different names for any given place, just to confuse things.  For example, if you are going to a popular destination north of Florence, you might say you were going to Heceta Head (cape, lighthouse and scenic viewpoint), or Cape Creek (river, bridge and cove), which constitute the substance of Devil’s Elbow State Park.  No matter what you called it, you would be at exactly the same place.  (And I honestly don’t know what the big rocks just offshore are named.)  To be fair, the bays and spits at the ends of rivers usually have the same name as the rivers, but it is never the same as the city that is situated at the mouth.  A state park in the same locale might allude to any one of these reference points, or something totally different.

What the Oregon Coast might lack in clarity, it makes up for in beauty and access.  Governor Oswald West got the legislature to declare the whole length of state beaches a public highway in 1913, and challenges to this were clarified by Tom McCall and the legislature in the Oregon Beach Bill of 1967, which established the state’s claim to all wet sand within 16 vertical feet of the low water line.  So while you may head to specific, named destinations, you can also just pull off the road wherever you want and walk on the beach.

While sitting outside that night, we suddenly felt a gust of hot wind, something we’d never before experienced on the Oregon coast.  We thought the first was a fluke, but then it was followed by another and another.  The wind picked up dramatically, with gusts up to 57 mph until 10:26, when the power went out and anemometer died.  We lay in the trailer listening to branches and debris bouncing off the roof, once again glad we weren’t in a tent.  In the morning I started Greta off on a solo hike from the beach to the beginning of the Cape Lookout trail, planning to drive to that trailhead and join her if I could (while favoring a bad knee and a sprained ankle).  She had a nice hike for a while through the woods, 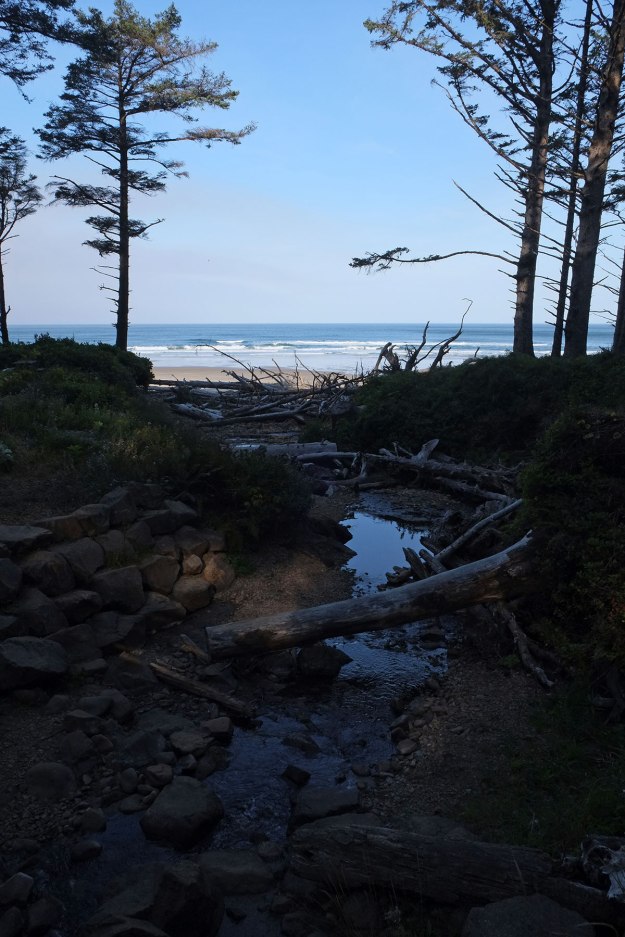 with intermittent views back towards the Netarts Spit

but then she ran into so many downed tress that the path was obliterated.  We waited for her at the trailhead (annoying the rangers who had closed the whole area due to the windstorm), and eventually we drove back down the road, finding her hiking up, after bushwhacking off the trail.

Since hiking in the woods was off the agenda, we went back to the beach, where we saw what was following the wind:  a huge cloud of smoke moving in from the east.

We knew there had been some fires east of Salem in the Cascades, but being out of cell and radio range, we had no idea that all of these fires had been supercharged by the unusual winds from across the Cascades the night before.  We enjoyed the blue sky, not knowing that it was the last one we would see for weeks.

We turned north to Tillamook, home of the famous dairy whose cheddar cheese we calculated we had eaten at least a half-ton of in the past 20 years.  Outside of the town is the Tillamook Air Museum, housed in the largest wooden building in the world, a former blimp hangar from WWII.

The building is spectacular – an arched vault made up of wooden trusses, with a scale comparable to sports arenas. 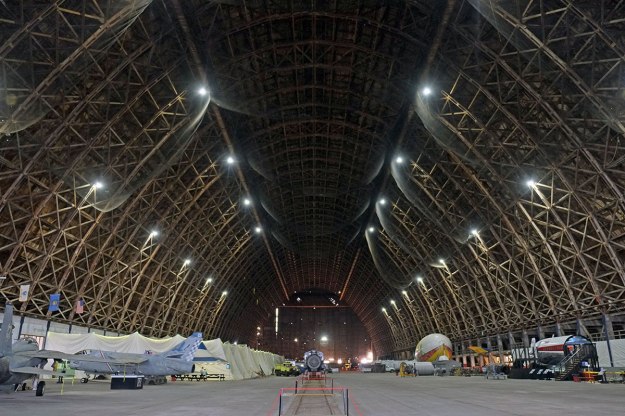 This building had a twin, but it burnt down in 1992;  they were using it to store hay.  But now they are probably more careful, and it contains a variety of military and civilian aircraft.

It’s a pretty eclectic collection, probably largely based on gifts.  What we really enjoyed beyond the aircraft was the random assortment of other items – tractors, cars, train engines, stored RVs, etc.  It reminded me of the Large Object Collection in Liverpool;  Liverpool had saved all this cool stuff, but at some point realized that they were never going to have the money to build a new museum, whereas they had lots of abandoned warehouses.  So they simply put everything in a series of buildings, with minimal attention paid to display and design – just let the objects speak for the themselves.  Tillamook does the same admirably. 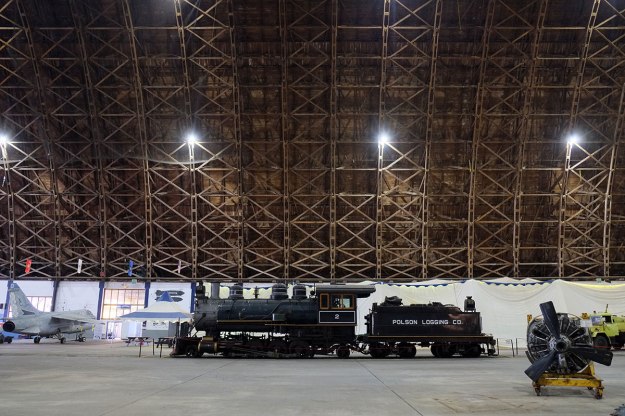 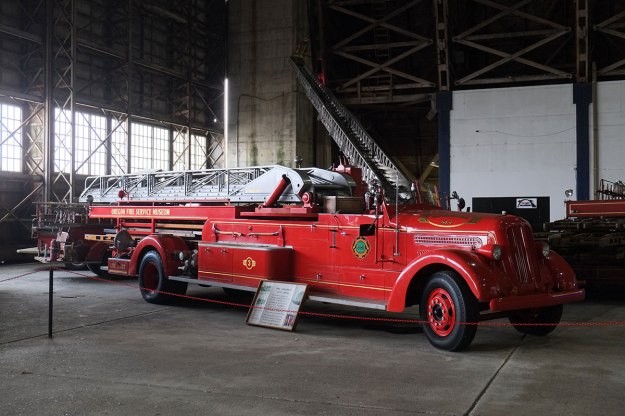 We emerged into air whose quality had degraded rapidly, and drove south on 101.  Familiar views took on a surreal quality.

At Lincoln City the traffic was strangely bad, with the right lane often blocked as cars lined up at gas stations.  We later learned that a fire had ignited outside of town, and people were getting ready to evacuate if necessary.  But we continued on our oblivious way to the Beverly Beach campground, where they were clearing away the downed trees from the night before, and the sky took on what was to become a familiar, apocalyptic glow. 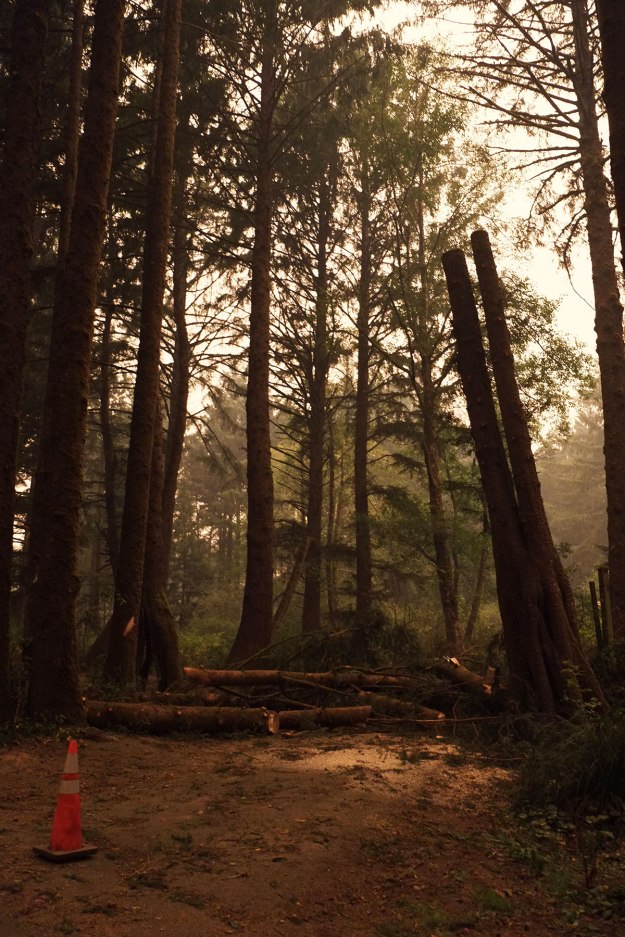 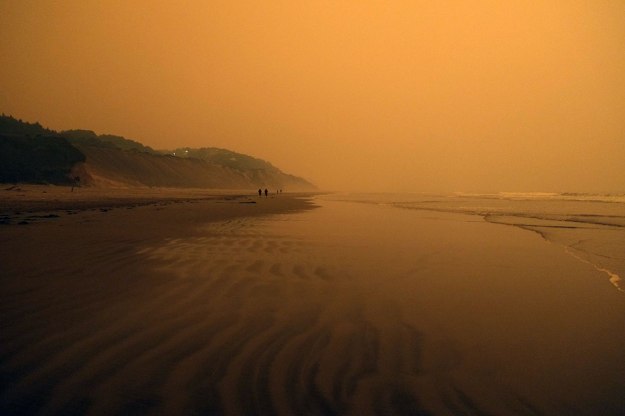 The next day dawned even darker, and all the prominent viewpoints were blank.  We spent our time at the points that offered smaller scale, closer-up experiences, such as Otter Rock (also know as Devil’s Punchbowl.  Devil’s ____ is a favored naming convention on the coast). 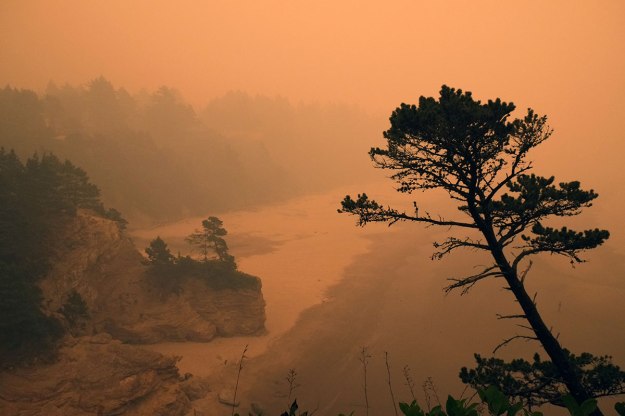 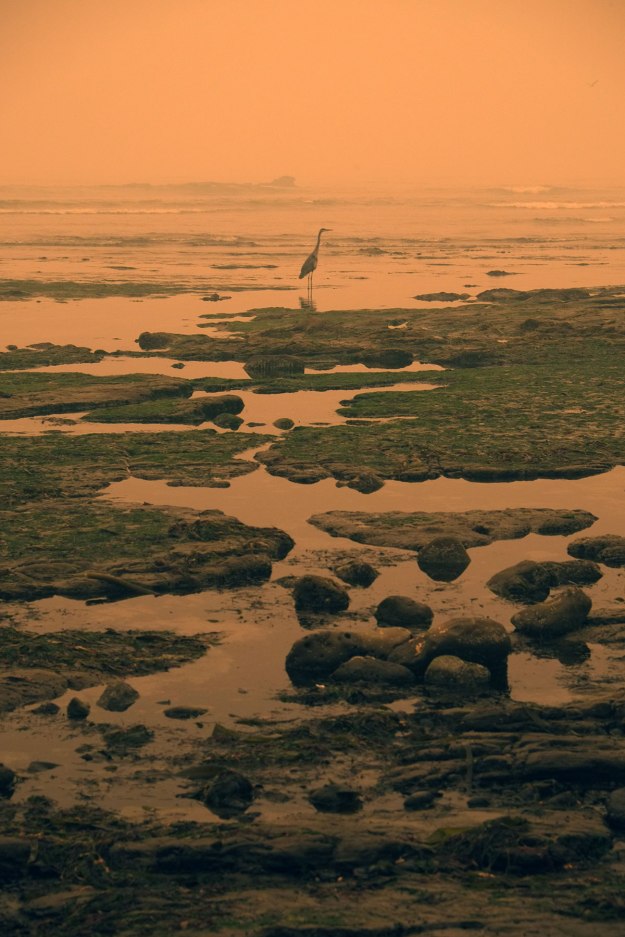 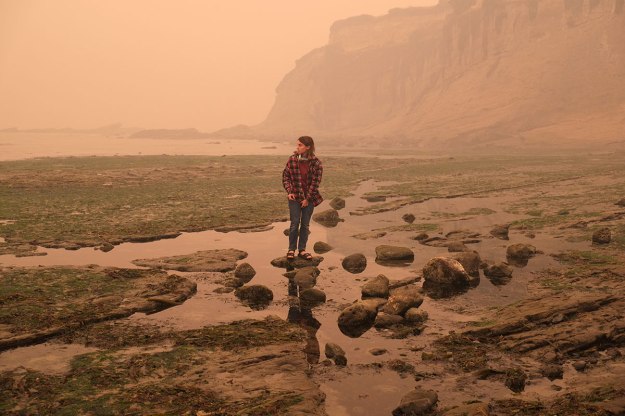 It was surreal, like being trapped in a photo album of 19th century tourist sepias.  Between the demands of social distancing, and the general eeriness of the day, we avoided the inhabited areas as much as possible, sticking to beaches and campgrounds.  Yaquina Head was devoid of other tourists, and we had it all to ourselves (along with the flies).

On Wednesday afternoon we first heard of the Holiday Farm fire centered on the McKenzie valley just east of Eugene.  It had grown to over 200 square miles in the two days since it started on Monday evening.  We considered heading home immediately, but realized there was little we could really expect to do, that the heat and smoke would be worse in Eugene, and that we would either be homebound or evacuating in the near future, so we might as well stay one more night.  We walked on Agate Beach, 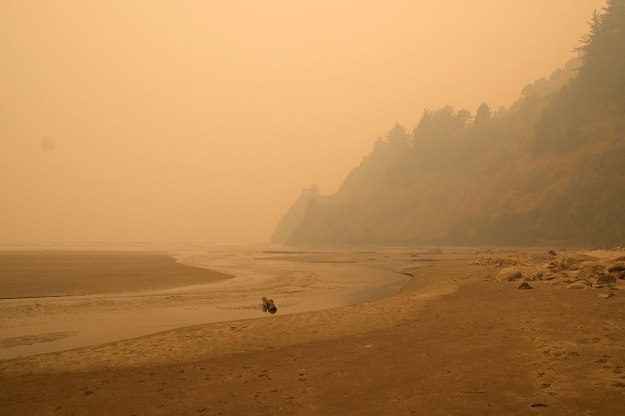 ate clams in Waldport, and spent the night at the Beachside State Recreation area, where we slept 100 feet from the beach, and listened to the surf through the night.

The next day we found Eugene to be a smoky ghost town.  The air quality index was over 500, and no one was outdoors.  With fires sweeping the whole West Coast, there was nowhere near the number of firefighters that would be expected at such a huge fire – just around 200 for the first few days.  Up and down the Willamette Valley over 40,000 refugees from the mountains and small towns have fled into the cities, where a remarkable volunteer effort has sprung up, affording the evacuees (and often their animals) necessary supplies and  places to stay.  The winds have died down and shifted towards the west, rain is expected later in the week, and the immediate threat of the fires (over a million acres just in Oregon) spreading further into the Willamette Valley has abated.  People are staying inside, glued to the news and social media. weathering the latest of what has been an unrelenting string of disasters of all kinds this year.  We’re all saddened by the tremendous losses of our fellow Oregonians, and grateful for the heroic efforts of our firefighters.

As we reflect on our only camping trip of the year – and what may be the last camping trip we take as a family – it seems highly emblematic of 2020 in general – not at all what we expected or hoped it would be, but less bad than any other option.  We’re glad we caught the last days of what has been a beautiful summer, and we’re holding on to these memories to get us through what’s coming this fall.  Stay safe, everyone. 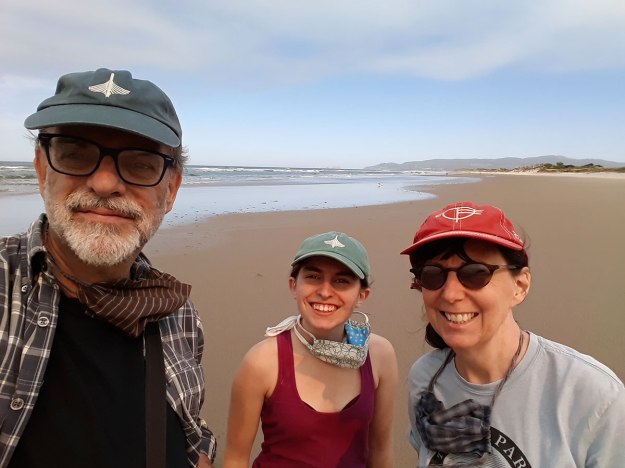 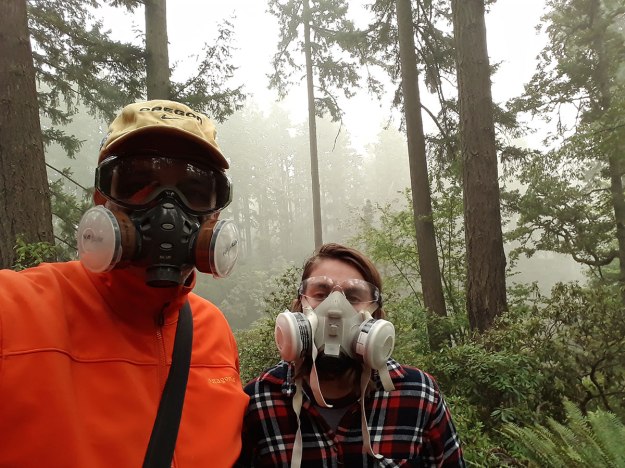 1 thought on “The Oregon Coast – through pandemic and smoke”