This is going to be page one of a very long list.

Tacos Mi Ranchito
Ontario, ID
A little agricultural town just west of the Oregon border, Ontario’s main street was lined with Mexican restaurants. We figured that this guaranteed the quality, as anything bad would be laughed out of town, so we picked the one with easiest parking. The tv in the corner showed a soccer game between Portugal and Peru. The food was simple and good, with the succulent carne asada burrito being wrapped up in foil, and stored for a latter snack.

Clavel
Baltimore, ML
Clavel had fantastic, fresh queso, salsas, and guacamole, but tacos made up the main meal. As well as beef, chicken, and pork, it had more unusual things, like corn mold and goat. I was already stuffed, but thankfully we were there with Ava, the growing nine-year old with a bottomless stomach and taste for adventure. She assures me that the second, more unique course was just as good as the first.

Rolling Fatties
New Orleans, LA
A food cart parked outside the medical complex, it delivered fast and simple burritos, tacos, and nachos. The most unusual thing was the rice, which was green. Not like an icky moldy green; a bright, intentional lime green. I don’t know what it was, but it was very soft and tasty. 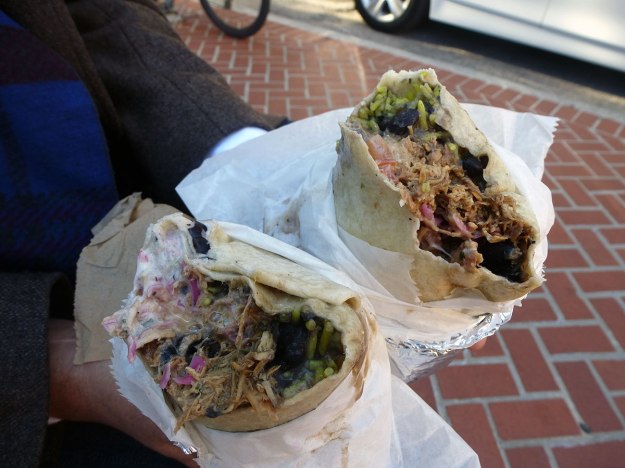 La Condesa
Austin, TX
La Condesa is much more hip than the places we usually visit, and it violated my rule of never going to a Mexican restaurant where the first language I hear inside isn’t Spanish. Upon tasting the guacamole sampler, however, this rule dissolved a little bit. Garlic, jalapeno, and mustard sat alongside normal guac, and with a never ending supply of chips, I could have easily, and almost did, fill up on the appetizers.

La Perla de Jalisco
San Antonio, TX
This is the cheapest meal we’ve had on this trip. Dad got the daily special, with was beef, rice and bean, and a drink for six dollars, and I got a burrito for five. It wasn’t the best Mexican food we’ve had on this trip, but for the price, it was fantastic. Unlike La Condesa, it was difficult to pick out someone speaking English in the crowded dining room. 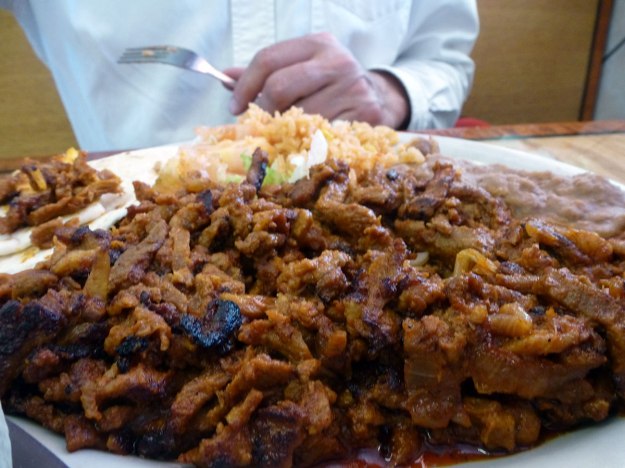 Salsa Puedes
Marfa, TX
Searching for lunch in the performance piece called the Marfa food scene, we discovered that there were two food carts open, and one served kale smoothies. I’m actually glad that Salsa Puedes was the only reasonable option, because it would have been a shame to miss it.  It made simple tacos, really well. There was plenty of seating as well, which can be a downside to food carts.

Old Pueblo
Phoenix, AZ
In the “food desert” of west Phoenix, Yelp came through again. Their barbacoa provided us with not only dinner, but airplane lunch the next day. It also came with the largest tortilla you will ever see outside a Guinness World Record book, over a foot and a half in diameter. 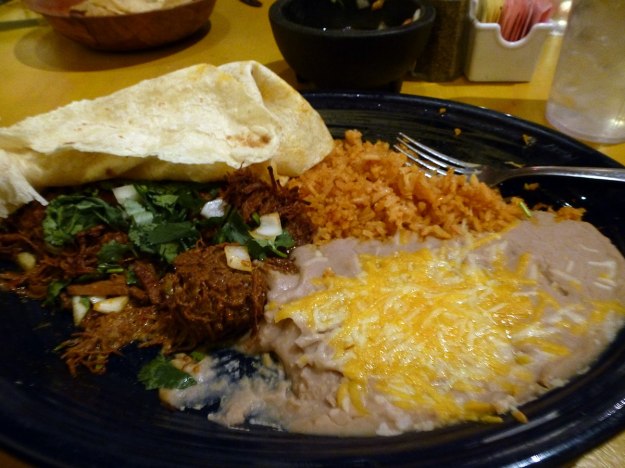 Tacos los Altos
Flagstaff, AZ
The food was good, but not the best part of the meal. Yelpers had recommended the aguas frescas, the fresh fruit drinks, which were sitting in big coolers on the counter. Ladled into the big cup that lasted me three meals, the watermelon drink actually tasted like the fruit, and not the artificial mimicry of it.