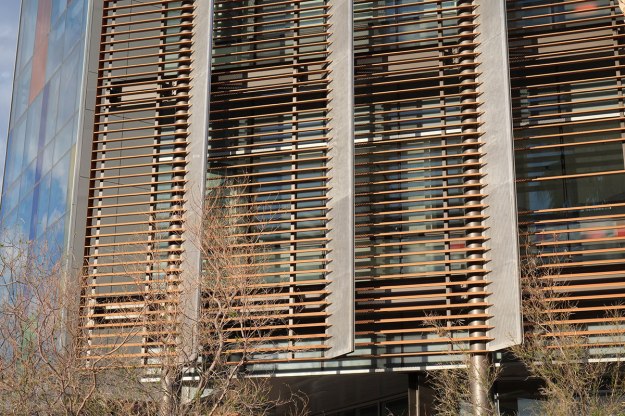 If you haven’t travelled extensively in an area, you still have many preconceptions about it, formed through what you’ve heard or read or seen on TV – some of which may actually turn out to be true.  Texas was where this became most apparent to me, as I had an abundance of received cultural knowledge and opinions about it, even though I had never before ventured out of DFW.  Although I had travelled through the Southwest a few times, I had never been south of Phoenix, so my opinion of Tucson was similarly secondhand.  All I knew was the syllogism – Tucson:Phoenix as Austin:Houston.  Just as Austin is the place in Texas distinguished by being nothing like the rest of Texas, Tucson is the place in Arizona that symbolically stands in contrast to the horrors of Phoenix.

Tucson is one of those mid-sized American cities (metropolitan area population under one million) which is livable and pleasant due to its not being within the ambit of the flow of global capital, nor prosperous enough recently to have grown exponentially in the past 30 years, when the homogeneous American sprawlscape reached its true apotheosis, and when the banal behemoths of recent skyscrapers have overwhelmed older downtowns.

Tucson also is fortunate in its limiting geography:  just as Portland is hemmed in by the west hills and the rivers, Tucson has mountain ranges to the east and west, so the sprawl in those directions is finite.  Also luckily, large areas of both those mountain ranges have been set aside, both as part of Saguaro National Park, and as other state and local preserves.  We stayed in a county campground adjacent to Saguaro on the west side, one which was so quiet and dark that we could watch the stars and listen to the coyote packs at night;  this is within ten miles of the city.  Phoenix has the misfortune to be in a much larger valley, so the sprawl can go on unimpeded for fifty miles in each direction, while Tucson is about twelve miles wide.  Aerial photos confirm that Tucson hasn’t sprawled very much in the past 30 years, so its suburbs exhibit a blend of the old and the new that can also be seen in its downtown, and which may be the key factor in whether a district has any character or not.  (cf. jane Jacobs again.)

Both cities are college towns, and while the much larger Arizona State dominates the cityscape around Tempe, it feels like a more local phenomenon within Phoenix’s four-million metro area.  The University of Arizona is still large (about 32,000 students), and it seems to be more central to the character of the whole city, as it is less than a mile from the downtown.

We cruised through the suburbs on our way to and from the mountains, and swung by something called Old Tucson, which started out as a movie set back in the 30s, but which is now a western theme park.  We arrived at the end of the day, just as the Wild, Wild West Steampunk convention crowd was leaving.  It was a little scary, and seems to have knocked Greta out of her steampunk fascination, as she has seen the future and it’s not a pretty sight.

We spent more time in the city core.  The downtown has a lot of buildings from the 60s and 70s, 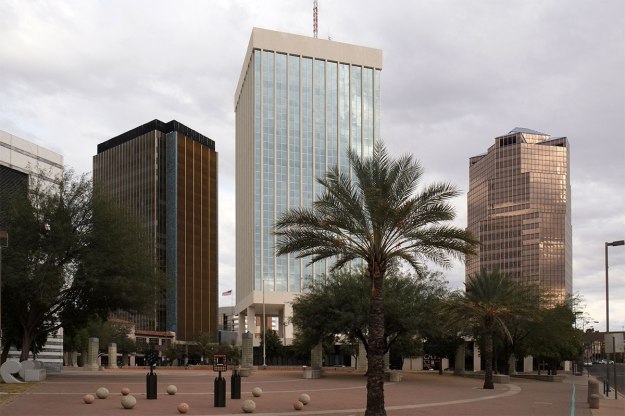 which are not gorgeous, but at least they’re not too big.  There are also some not-great institutions, such as the library

and some newer buildings which aren’t much better.

The Tucson downtown can’t seem to make up its mind – is it a city downtown, where fabric buildings define the public spaces of the streets and squares, or is it an edge city office park, where object buildings sit isolated in a sea of parking and undefined open space?  The open spaces are just too big, the developable lots are too big, and while the object buildings cry out for attention, they’re really not very good.  Tucson committed only one ghastly error, creating a superblock around their county government campus, where a subterranean parking level may hide a lot of cars, but which disrupts the street pattern and channelizes traffic onto a few big arterials.  The no pedestrian sign is the tip-off of the portal to this netherworld.

I don’t know the history, but it looks like they urban-renewed (bulldozed) their old downtown (or an adjoining neighborhood, probably “blighted”) during the 60s, and replaced it with these towers (versus Eugene which bulldozed its downtown and forgot to build anything new).  And then probably having overbuilt their office market, things ground to a halt.  It’s not great, but it’s fixable.

The good news is that the adjacent neighborhoods – Barrio Viejo, Armory Park and Iron Horse – were largely left alone.  Today they are the usual mix of gentrifying bungalows, small multi-family projects, light industrial and new commercial that can be seen in many other older city first-ring cores.  There was a reasonable amount of street life in all these areas, even on a Sunday.  The damage was limited to the one core area, and even that is better than many we’ve seen.

The university area, which is surrounded by low-scale residential neighborhoods, felt familiar.  A nice mix of small-scale, old multi-family:

and upscaling bungalows (the Mini being the universal sign of this), although they are getting some large, privately-developed student housing, just as in Eugene.

The college-town commercial area is very lively, with many open-air cafes, such as in  this lovely courtyard development.

The campus itself is beautiful.  It is similar to the University of Oregon, being within a city but with a distinct campus edge, rather than blending into the city fabric.  Also similarly, the campus has a well-landscaped core, with elegant old buildings, all variants on a brick/southwest style, set in manicured lawns.

But the recent development is the most interesting.  They have done a fantastic job of fitting relatively large, new buildings into the existing framework, not overwhelming the scale of the campus, nor adhering slavishly to stylistic prescriptions (both of which happened at the University of Texas).  The buildings themselves are also good to excellent, and are notable for the uniformity with which they have addressed environmental issues (primarily sun-shading) in this desert environment.  An older US government building on the edge of the campus has a screen wall which defines a courtyard: 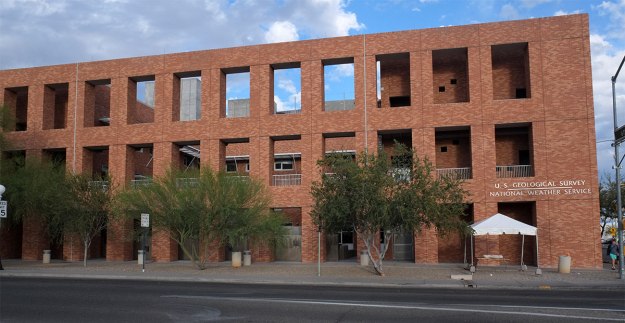 A new building at the business school has a south-facing facade which utilizes both palm trees and a sophisticated brise-soleil for shading. 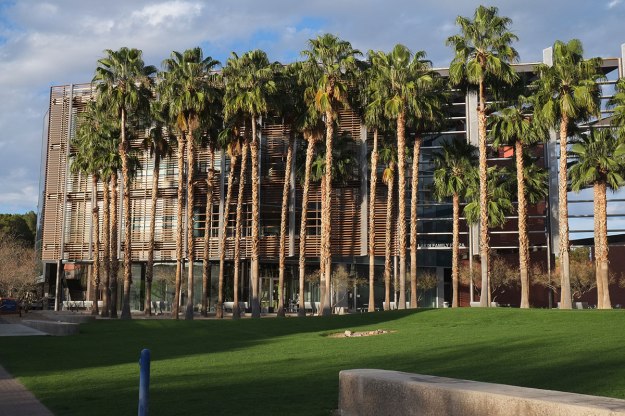 Even spotted from a long way across campus, my instincts told me that this was the architecture school.  It is in fact a large addition to design college (CAPLA), designed almost ten years ago by Jones Studio, in Tempe.  The environmentally-responsive diagram is completely straightforward:  a long east-west bar, with extensive and deep shading on the south side.

There are architectural shading elements, as well as a framework for plants, and a garden area where a native landscape is nurtured and used for installations. 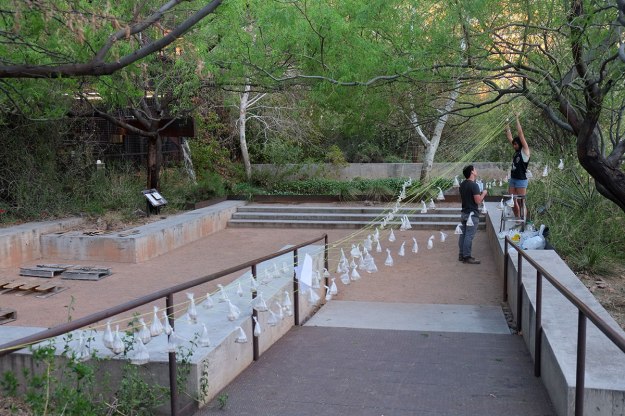 The east and west walls are mostly blank, with circulation 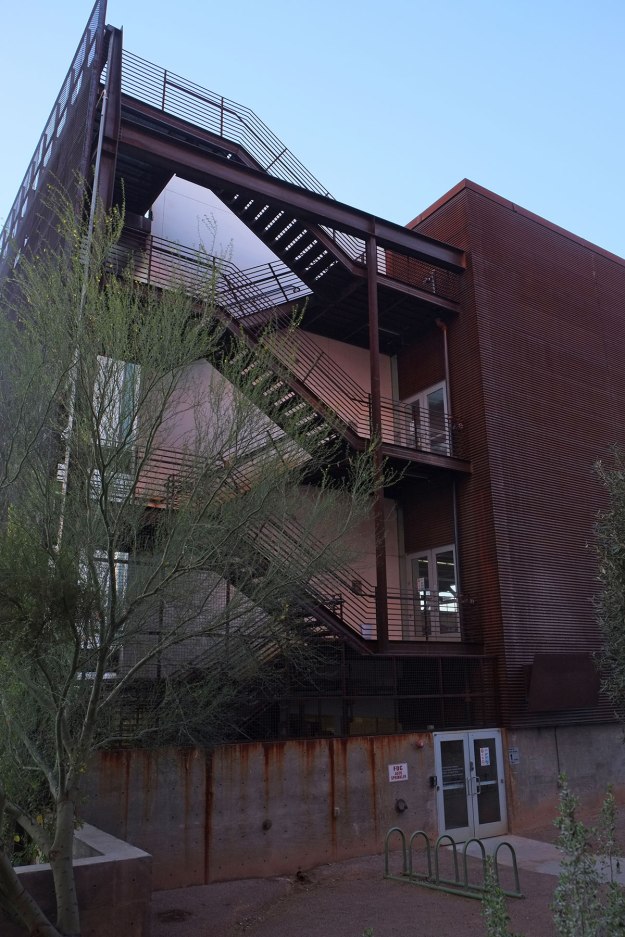 and access into an openable shop on the ground floor.

The north side, which faces a major arterial, is glazed for daylighting the studios.

An excellent building, which takes it cues from the strong determinative forces of climate and program, and which articulates those in a systems-driven building with elegant detailing.  It is a truism that in most places, the new architecture building is usually the worst building on campus – architects seem to feel the need to make a design  “statement” when given such a visible project.  It was a pleasure to see Jones Studio take an opposite tack, and do all the sensible moves really well, illustrating what an architecture driven by substantive ideas rather than style can be like.

I don’t know much about the architecture department at the university, but outside the university’s downtown center, I spotted this amazing sign: 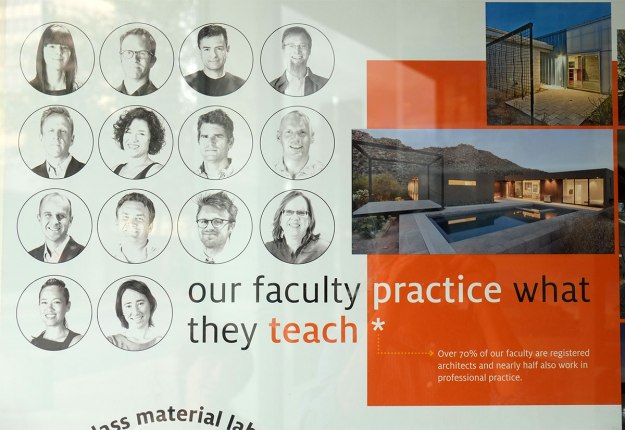 They seem to think that it is a good idea for their faculty to be involved in the design of architecture;  in fact, they celebrate it!  This is probably good for their accreditation, and even good for their students’ education, but I don’t know how they can maintain this attitude within the confines of a big research university, where the preference for the written article over the designed building has become almost universal.  (If it hadn’t been a Sunday I might have dropped in to explore job opportunities, as they appear to be deficient in the proportion of cranky old guys on their faculty.)

There is an even newer, bigger showcase building on the south edge of campus – the Engineering and Natural Resources Building 2, designed by Richärd+Bauer and GLHN, both from Phoenix.  It opened last year, and has been lauded for its sustainability performance and its support for interdisciplinary efforts.  The south elevation has a functional yet expressive shading system, 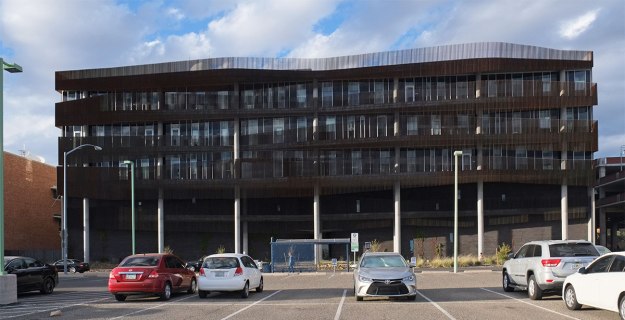 with an occupiable colonnade tucked under the building edge, offering respite from the busy arterial. 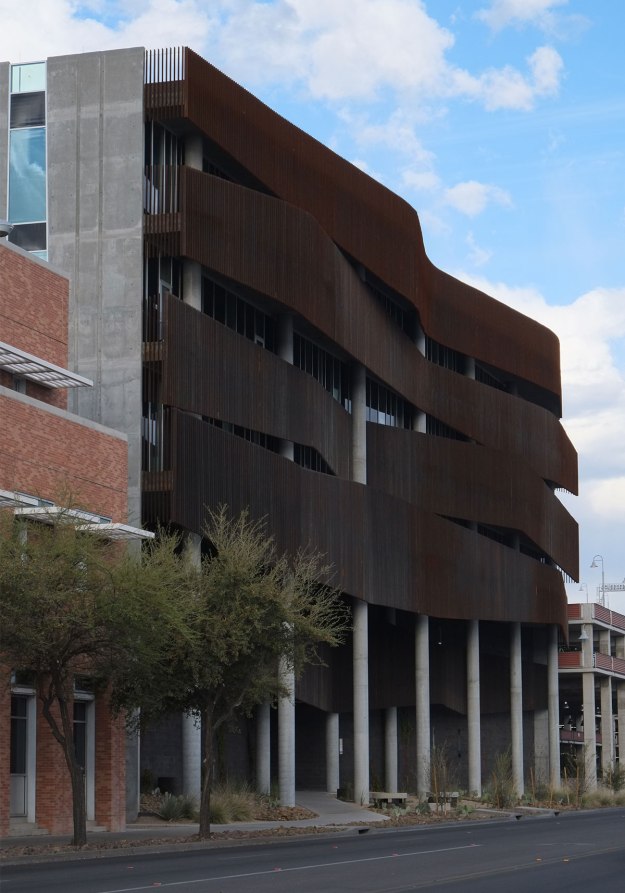 The north facade has a thinner variant on the shading system.

The middle of the building is a deep courtyard, which supports daylighting and ventilation strategies, and which works metaphorically as a slot canyon. 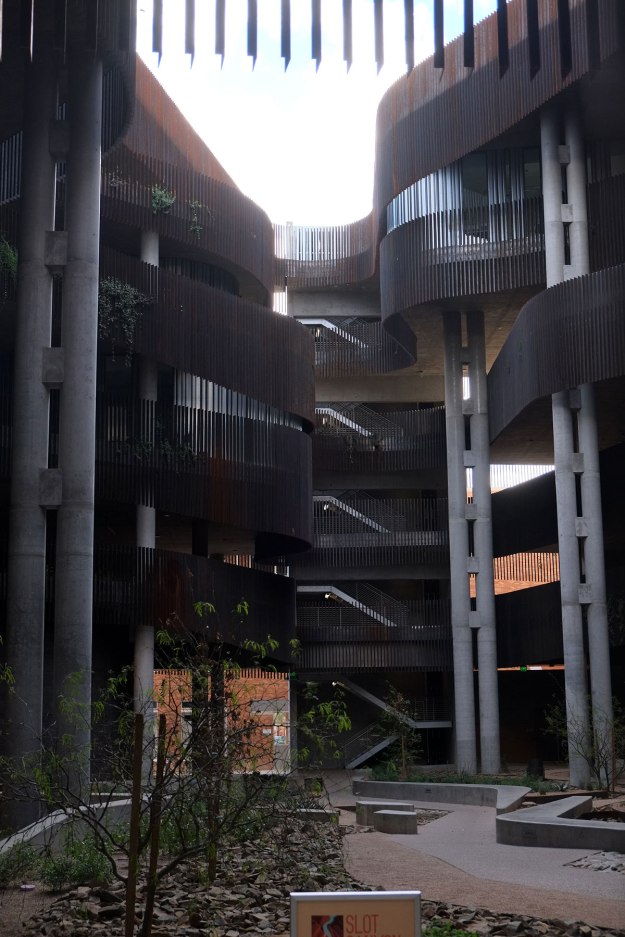 Another building where the ideas of building performance drive the architectural expression;  something is clearly going on in the university culture, if they are producing so many fine buildings.  We saw one more element, which simultaneously puts the University of Arizona at the forefront of sustainability, livability and hipness: 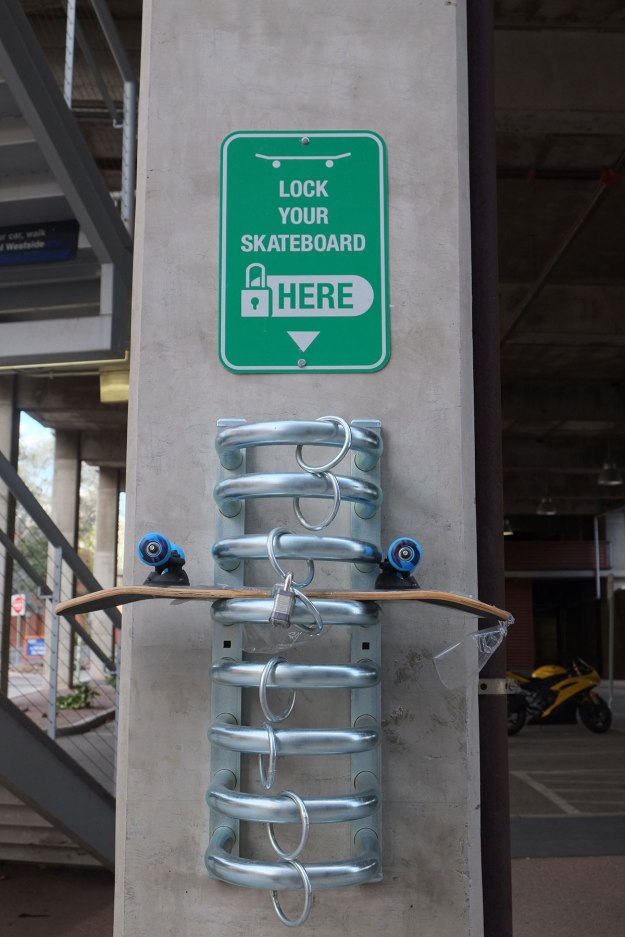 There are lessons we could learn from this university, and lessons both positive and negative at the city scale.  I had my limited preconceptions about Tucson before we visited, but the reality turned out to be even more interesting.