New Orleans is one the mythic cities of America – like New York, or San Francisco, or Chicago.  It occupies more psychic space than is justified by its size, or its current role in the national culture.  It was one of the few great American cities that I had never visited, and I approached it with a mixture of excitement and uneasiness.

Most American cities fit a pattern – JB Jackson wrote “The Stranger’s Path” decades ago, which laid out the typical components and their sequence in a mid-sized American city.  During this year on the road, when we’ve visited about 175 different cities and towns so far, certain obvious patterns have emerged – I think I could easily update the Stranger’s Path for the 21st century.  But from what little I knew about New Orleans, it seemed clear that this would be a place which wouldn’t fit those patterns.  Even looking at maps didn’t help – I couldn’t organize the information in a way that made sense to me.  So we headed in with not much more going for us than knowing the route to my friend Glen’s place.  After skimming across seven miles of open water on the I-10 causeway, Google Maps said we should drive down Elysian Fields.  Definitely mythic.

The first two days in New Orleans did nothing to dispel this combination of wonder and confusion. The neighborhoods, the streetscapes, the houses, the colors  – they were unlike anything I had ever seen, confirming what I had been told – that New Orleans is really a different country. The experience of walking through the city was new and magical, at the same time that the underlying order of the city was completely confusing.  I couldn’t make sense of the whole – the twisting geography, the invisible topography, the relationships of neighborhoods and populations, the river, directions, street patterns. On Glen’s advice I picked up a book by Richard Campanella, a geographer at Tulane, and it confirmed my impression – New Orleans and southern Louisiana are not like any other place in the country – culturally, spatially or geographically.

The highest land is along the river. The ridges (those areas actually above sea level, along Esplanade and from Metairie to Gentilly) were settled first,

with low-lying swamps drained and developed later (sometimes in what is now the middle of town).  Settled by the French, taken over by the Spanish, ceded back to the French and then sold to the Americans, it shows the same variation in sovereignty that we’ve seen all along the Gulf, but in New Orleans there is much more visible evidence of this history.  The Spanish and French built the Vieux Carre (a term which I never heard anyone use, with French Quarter having taken over). 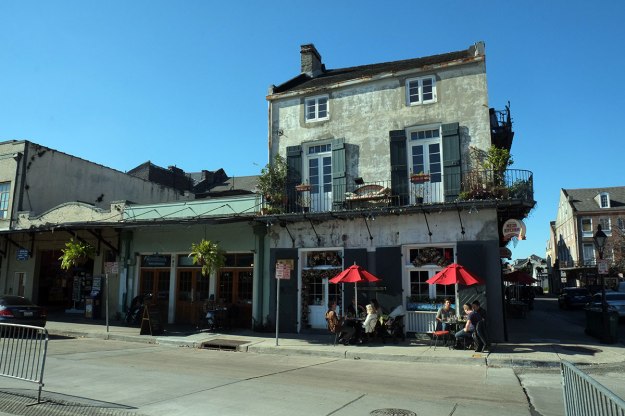 The Americans settled later in Uptown, across Canal St. (which never had a canal).

There are natives with what seem to be real New York accents (I met some of them.)  The city didn’t flood from the riverside, but from the lakeside (where the land is lower behind the levee)

and the breaks in the levees on the canals (such as here in the Lower Ninth Ward).

The list is endless – New Orleans is an assemblage of conditions and situations, and after a lot of reading and a few weeks in residence, it started to make some sense.  I won’t pretend to comprehend it – nor attempt to explain it – in the way that a simpler place such as Fernandina can be grasped.   But I did develop enough of a conceptual framework to at least organize the series of impressions garnered from walking around endlessly.  For a relatively small city (current population under 400,000), it is the most complex place we’ve been. 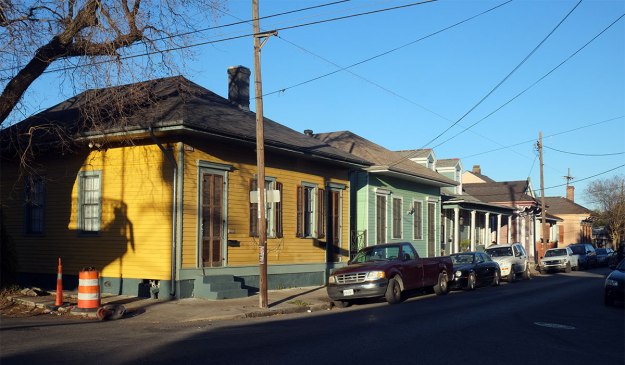 We stayed with Glen and Michelle in the Marigny, one of the first faubourgs, developed from a former plantation next to the Vieux Carre at the beginning of the 19th century.  It is mainly residential, with a wide range of New Orleans house types – double shotguns, Creole cottages, etc.  (There will probably be a post just about New Orleans housing).

The Mississippi River defines one edge of the neighborhood, which you only notice when a ship passes by the end of the street.

After a while I realized you can never see the horizon in New Orleans.  It’s completely flat, so you’re never high enough to see over things, plus the height of the buildings around you and the levees along the waterways means you’re essentially in a shallow bowl.  The only way to get a sense of the larger landscape is to climb atop the levees along the river or Lake Ponchartrain.  The recently completed Crescent Park, which runs along the river from the Marigny through Bywater, is a New Orleans version of the High Line or Riverside South.  Designed by a team including EDR, David Adjaye and Hargreaves Associates, it has kept the remains of the industrial waterfront.

Access is limited by the railroad which runs along the river, but a few bridges connect across.  The park feels very cut off from the city – hopefully more access points can be added. 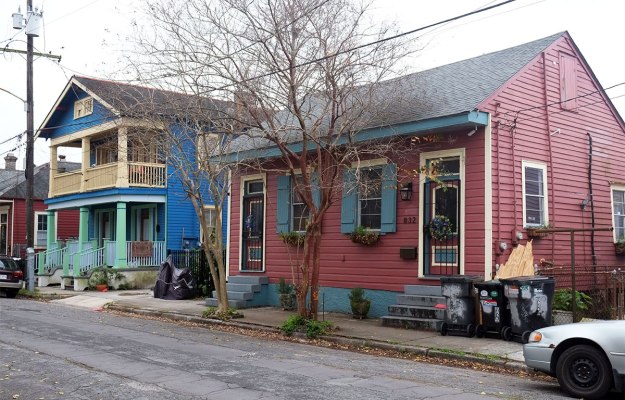 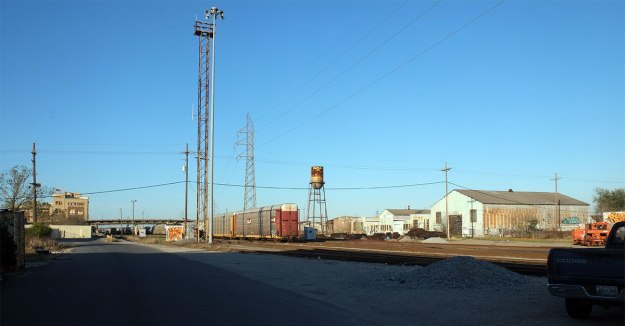 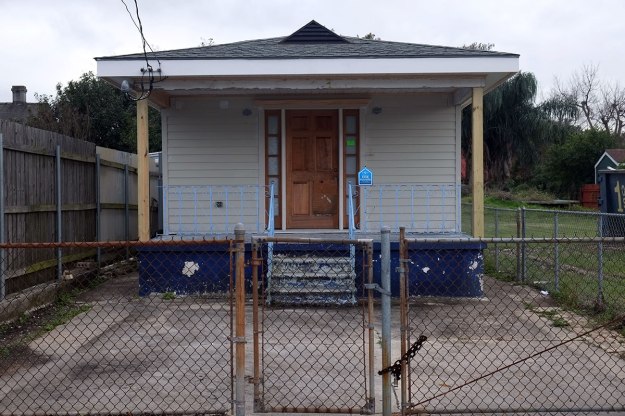 The French Quarter is just upriver from the Marigny, and we spent a lot of time walking its streets.  Eventually the pattern of use became clear:  tourists on Decatur and by Jackson Square, 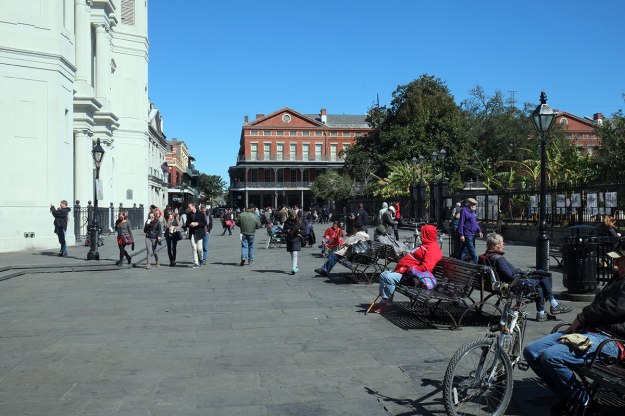 and the rest of it felt like it was for the residents.  It is the part of New Orleans which is most foreign, with the older architecture from the Spanish era (the earlier French architecture was wiped out in a fire in the late 18th century), and the part most of us think of when we form an image of New Orleans. 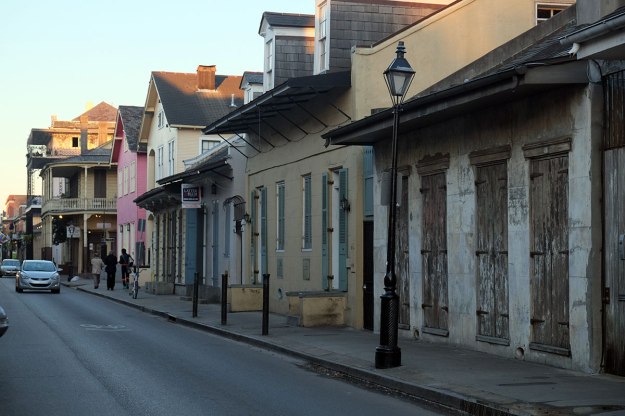 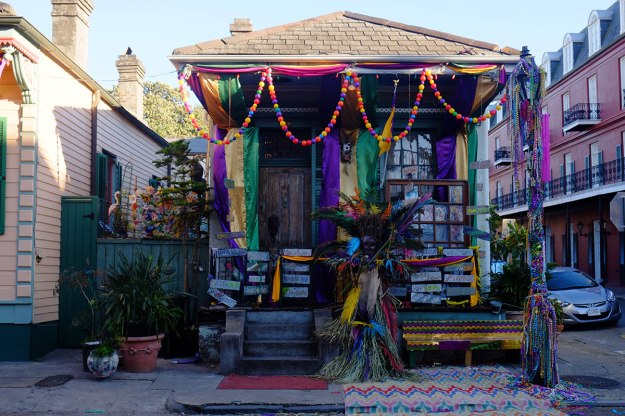 We found it endlessly fascinating.  The scale, the textures and colors, the details, the quirky businesses and residents – there is a richness of experience which is rare in this country.

The central business district – with its convention center, hotels, and casino – adjoins the French Quarter on the upriver side.  Once you cross Canal Street the city changes – the architecture is mainly 20th century, as the 19th century buildings have been replaced.