By our third day, I was beginning to become convinced that the Marfa food scene was a big performance piece.  Nine of the ten restaurants in town had yelp reviews of four or higher, but they were never open.  The first night we were there we drove past six, all of which were closed. The second day, we could only find two food carts that were open for lunch, and one was a horrible little thing that only served kale smoothies.  We were heading out of town, planning on peanut butter and jelly, when we drove past and saw that Food Shark, another food cart, and the highest ranked on yelp, was open.  Their regular menu has mostly vegetarian options, like the Marfalafel, but their specials usually are a meat dish.  Normally I would say this was a bad strategy, because if you’re always learning new dishes how will you practice enough to make them good?  I shouldn’t have worried. Today it was brisket sandwich and lamb kebab.

Man, those guys know how to cook meat. Admittedly, I have not eaten a lot of brisket on this trip, but that was second only to Smitty’s (coming soon!). It was so soft and tender I almost mistook it for pork. 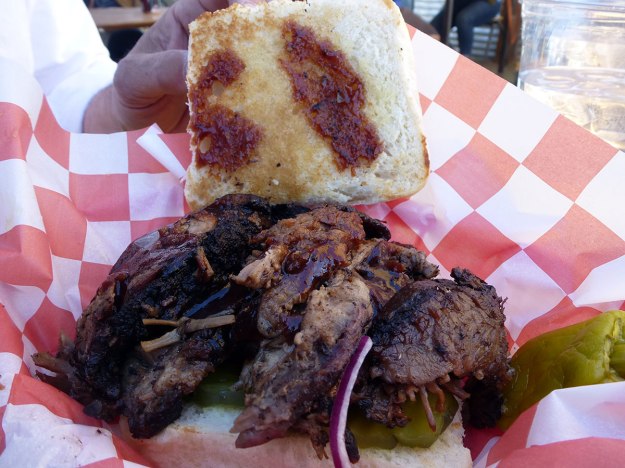 The lamb would not have been. The way it was cooked seemed to almost highlight the best parts of the meat, rather than trying to gild a lily and adding something new. The flatbread it was served with was soft and fresh, and we were seriously considering asking to buy a tub of their hummus.  It was some of the only stuff we’ve encountered on this trip that wasn’t dry, gritty, or bland.

Marfa is really far from nowhere, so you probably won’t go there unless you’re into art or take my food recommendations really seriously. But if you do, don’t come early in the week. Art tours may be easier to book, but none of the restaurants will be open. And even then, beware of the performance art.