Travelling in the Southwestern desert means visiting many canyons.  They are all beautiful, many extraordinary; but if you are a northwesterner, eventually you are discomfitted by the extreme sun, heat and aridity, and start longing for some greenery, a little water, maybe some trees. Then you reach Zion Canyon, and you feel that you’ve arrived in the Promised Land.  The name makes sense, as this seems to be a place where humans are meant to be, a refuge from the desolation of the outside world.

There are other inhabitable canyons scattered around the Southwest – we’ve been seeing more in recent weeks as we’ve visited ancient cliff dwellings and modern reservations – but Zion is by far the grandest, the most spectacularly appealing, the American Shangri-La.  We decided to spend a few days here, soaking up the atmosphere.

The canyon itself is about twelve miles long, with a road up the middle.  When I last visited here in 1978, you could drive up the road, but its capacity had been overwhelmed, as Zion now has 4  million visitors per year.  So the Park Service has followed the example from the Grand Canyon and instituted a shuttle bus system – which has service every 10 minutes, and drops people off at major sights and trailheads.  It works incredibly well, and keeps the milieu from becoming that of a traffic jam with scenery.  They also have a unique solution to the parking problem, with demand again far exceeding the size of their parking lot (which can’t easily be expanded, because it’s a narrow canyon).  The town of Springdale lies right outside the entrance to Zion, and you simply park somewhere on the street in Springdale, walk over to the main street and catch a different shuttle bus to the park.  Surprisingly, this worked just fine, but I wonder how crowded it gets in the summer.  But it is satisfying to see an innovative, local solution to this problem, rather than defaulting to the typical huge expanse of asphalt.  And when you get off the shuttle late in the day, there is a nice restaurant right near your car.

Even though the park shuttle is a good solution to the car problem, we didn’t want to take it.  We have been driving a lot, and seeing the canyon from another vehicle wasn’t appealing.  Plus we’ve found that stopping at specific points to see a sight, then getting back into a vehicle to drive to the next one isn’t at all satisfying – whether we’re in a landscape or even in a city.  We like to walk, and see the gradual transformation of our surroundings, understand the continuum of the place, and not just the episodes.  So we walked the length of the canyon, from the entrance to the Narrows, where the dry trail disappears into the river.  The twelve-mile route rises from about 4000 to 5000 feet, and the surrounding mountain peaks are in the 6000-7000 foot range.  For the first few miles of the route there is a trail along the river, and it is very pleasant.  The cottonwoods were leafing out, and the vibrant green of the foliage stood out against the dark cliffs. 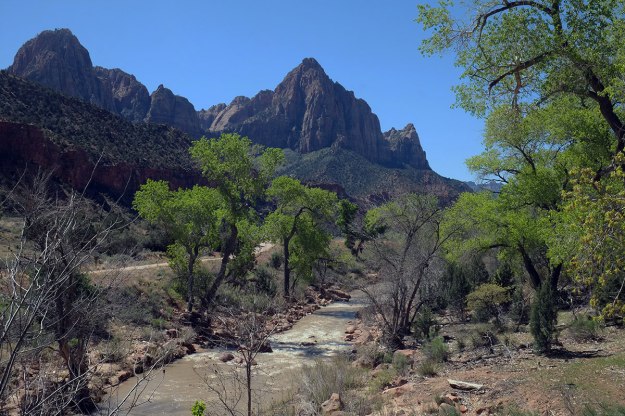 But after this stretch there is no trail, and you’re supposed to walk on the two-lane road.  It’s not terrible, as the only traffic is the buses, some bikes, and the few private cars being driven by people who have rooms up-canyon at the lodge, but it’s not the same as walking on a trail by a river beneath the cottonwoods.  We’ve become even bigger fans than before of the National Park Service – they do an incredible job of managing these parks, and making very good decisions at every level.  Our main criticism of their worldview is the assumption that Americans are in their cars until they get to a destination, such as a trailhead, and then they get out and walk.  The climbs at Zion are beautiful, but it seems that the main point of the whole place is the canyon itself, and encouraging people to experience that on foot would be a good thing.  Our third day there we saw huge lines in the morning for the shuttle bus – I bet that if there were a clearly delineated and named path, a lot of people would choose to walk, including many people who aren’t able to do a mountain climb.  Maybe they’d even keep walking when they got back home.

Walking changes your whole perception of the park in another way.  The canyon walls at Zion are tall and uninterrupted, except for a few shallow side canyons, but they are not continuous cliffs.  They are composed by a sequence of distinct mountains, which are distinguishable from each other by form, and often by color.  Each mountain is imageable, and so they have all been named – the Watchman, the Court of the Patriarchs (many have quasi-religious allusions), the Temple of Sinawava, etc.  This naming emphasizes Zion as a sequence of objects, whereas I think you experience Zion as a series of spaces, even as large outdoor rooms.  You can experience a canyon from above on the rim (the Grand Canyon comes to mind), or from the canyon floor below.  In the first case it is a view, and in the second you are within a place, looking up at the walls around you.

As you walk up the canyon, you sense the walls gradually closing in.  At the visitors’ center, the floor of the canyon is about 3/4 of a mile wide (including the gradual slopes that lead up to the cliff faces).  Within a couple of miles it closes in to 1/4 of a mile, and eventually is under 1/10 of a mile at the head of the canyon.  This sense of a deepening and shadier canyon is clearly felt, so that when you arrive in front of the Lodge, and the canyon widens out around a large lawn with a tree in the middle, you stop in wonder at the transformation.

It’s a wonderful spot, with people picnicking, kids turning somersaults, hikers resting their feet, and everyone looking up at the surrounding walls.  The topography makes the place, and it has been carefully enhanced by subsequent interventions.

There are several other points where the river bends and creates a room , such as here where a butte stands as an object in the middle.

Eventually it closes in with one last turn,

and you enter the Narrows, where the river takes up most of the space between the cliff walls. 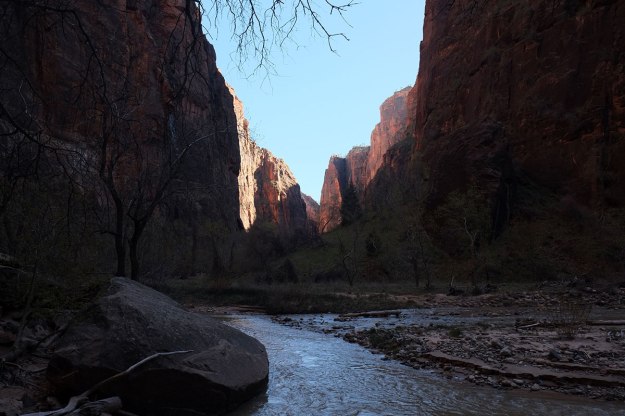 You can continue hiking, either getting cold and wet or renting a wetsuit for a longer hike.

We decided to do that, arrived the next morning, and were confronted with signs saying that a flash flood was “imminent”, and so we weren’t able to hike further through the Narrows.

We did a few side hikes, up to see the three Emerald Pools, low, middle and high, which are along the drainage of a side canyon, each of which waterfalls into the next lower pool.

The next day we attempted the trail to Angel’s Landing, a 1500 foot climb up a steep rocky trail to the peak of a mountain poking out in to the middle of the canyon.  We made it up through Walter’s Wiggles, 27 switchbacks cut into the sheer rock face – you can see a couple of them on the middle right-side of this photo – look for some hikers wearing brightly-colored clothes under the overhangs. 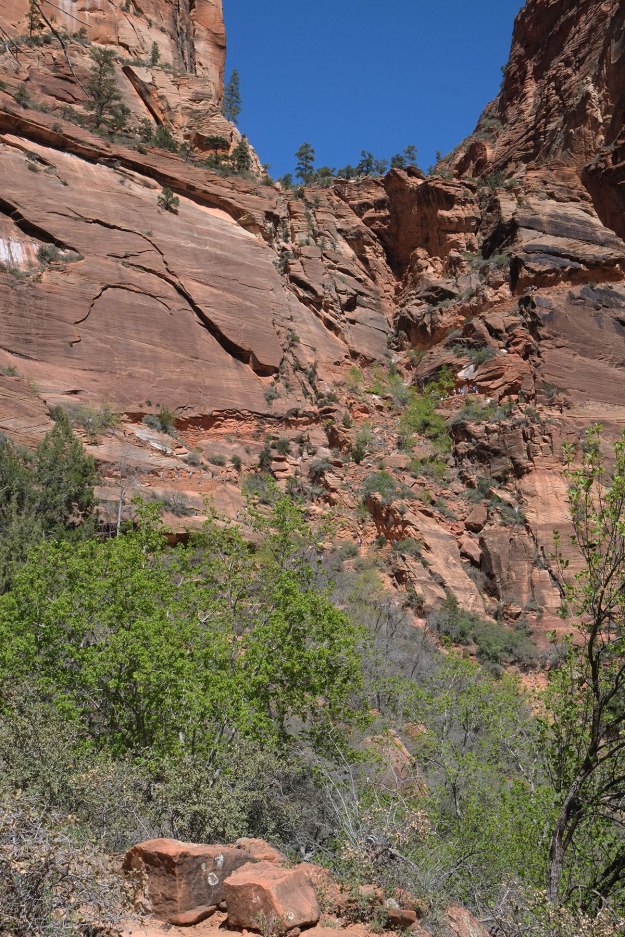 Here is Greta on one of those switchbacks.  As we hiked through the subsequent narrow canyon in a saddle, she became dizzy, so we turned around and rested under this overhang, and then headed down.  We are low-altitude people, and hiking around 6000 feet means there is way less oxygen than we’re used to, something that occurred even more noticeably later at Bryce, where we were climbing at 8000 feet. (Greta later read an article which pointed out that young people are more susceptible to altitude sickness. As you get older, your brain shrinks, and there is room for it to expand within your cranium with altitude gain.)

We were disappointed to not make it to the top, but the view from halfway up was still worth it.

The canyon floor remained our favorite spot, with the starkness of the mountains making you appreciate the lush river bottom land even more.