We are now in the southwest, National Park heaven, where you sometimes find yourselves inside one without even trying. Big Bend was a precursor to this area for us, but now the giant crazy landforms are coming at such a pace that they’re getting their own fast-track on the blog.

Our first experience with National Parks on this trip was in Yellowstone, which we’ve come to think of as an anomaly.  Yellowstone isn’t one place, it’s a lot of distinct places in close proximity – big mountains, geysers and hot springs, wildlife, a big canyon, waterfalls, open plains and lakes, etc.  Most of the Parks in the Southwest seem to be more one-liners.  Of course there are a wide range of ways you can understand them – geologically, ecologically, culturally – but they don’t have the same breadth as Yellowstone.  Greta and I have discovered that our interest in geology lasts for about five minutes, and our interest in botany a bit longer.  We appreciate really cool looking rocks and mountains and plants, but we’re not all that interested in getting into a lot of depth about them.  For us, the distinct experiential character of each park depends upon two items:  what is the Big Concept for each (usually the reason it was seen as being significant and worth preserving), and how can we kinesthetically experience the park by hiking through it.  In the Badlands we realized that we dislike driving around and looking at scenery, but once we get out of the car, the experience of walking or climbing through the landscape is the way we come to appreciate it best.  So those readers who actually know something about rocks and plants will find my observations sophomoric (just as I would probably not be impressed with their insights into architecture).

Saguaro National Park sits on two small mountain ranges, on either side of Tucson.  It’s quite unusual to have such wilderness in such proximity to a pretty big city.  And from what we’ve seen, it’s also an anomaly for a southwestern National Park to not be about big piles of rock in amazing shapes.  The Big Idea in Saguaro is not the landform, but the vegetation.  It is the greatest collection of bizarre plants we’ve ever seen.  None of them are familiar, and most of them seem capable of hurting you really badly.  The saguaros are the main attraction, as they apparently exist here in a profusion unlike anywhere else in the US.  They are strange, 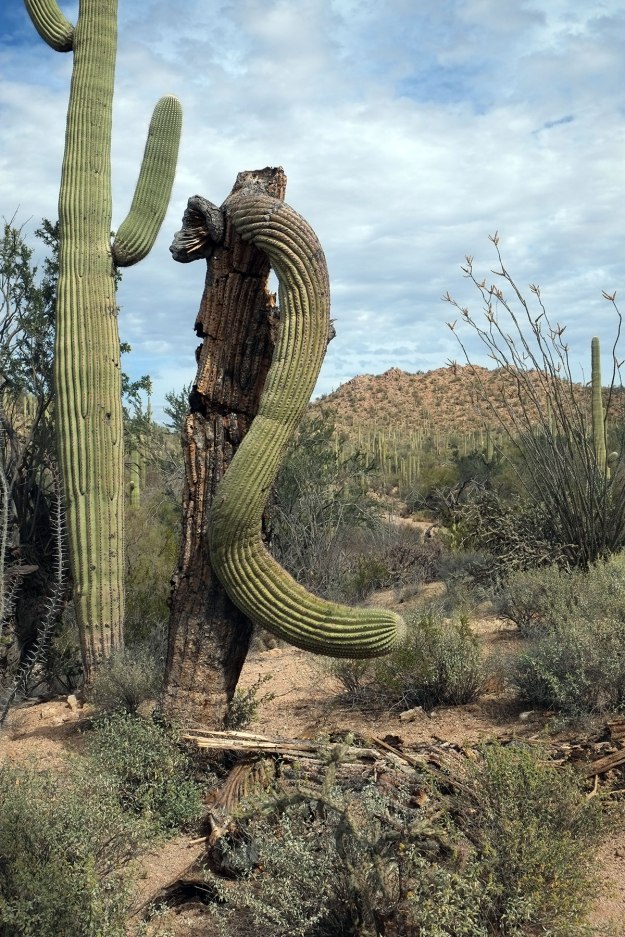 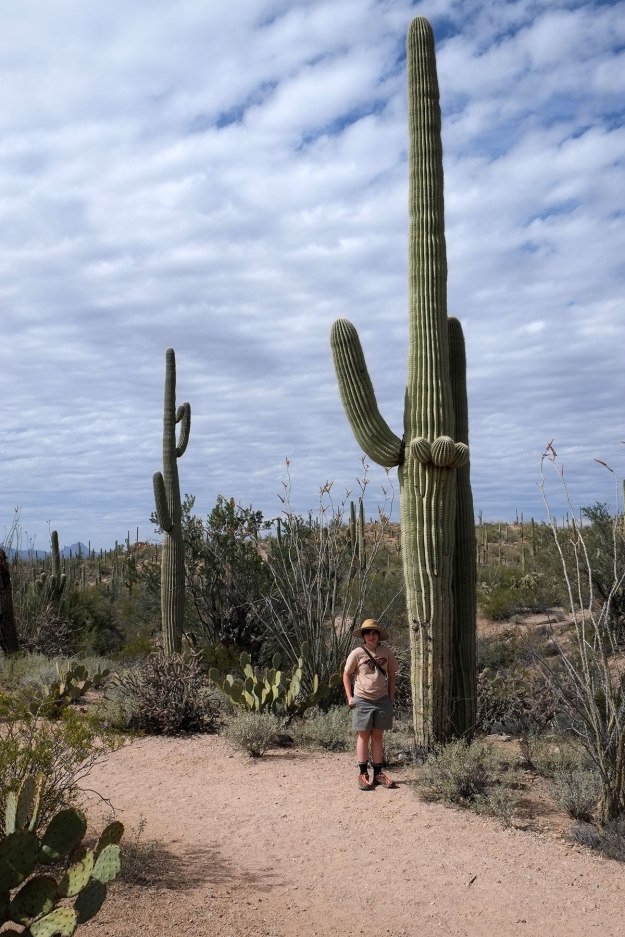 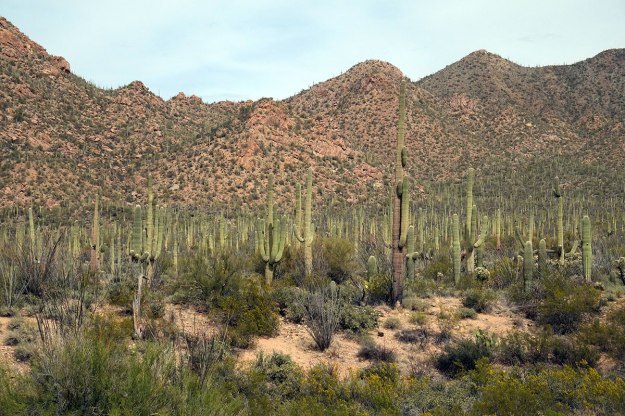 There are many other equally strange, but smaller, plants around.  Lots of cacti and yuccas and agave and such. 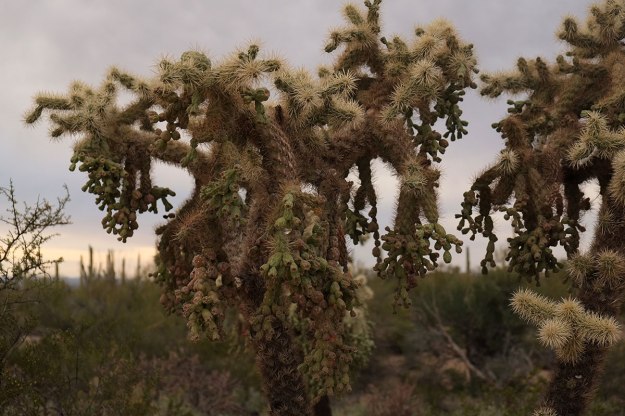 (We learn their names when we see them, and forget them within a few days.)  I am pleased when I see one that apparently has an afterlife as tequila or mescal. 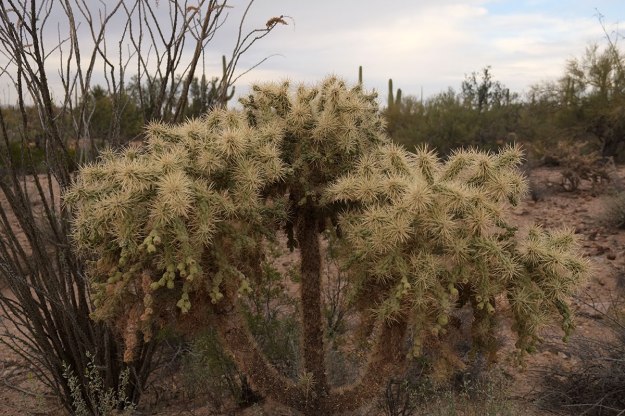 We took some short hikes in Saguaro, and decided to not try any longer ones, as we didn’t think they’d seem very different to us.  It struck me that Saguaro is a modular place – every 50 foot by 50 foot area is incredibly interesting, in the variety and strangeness of the juxtaposed plants.  But then the next 50 by 50 foot plot is about the same.  You don’t hike to a sublime view, or have a wide variety of rock-scrambling experiences.  Our local informant in the culture assured us that changes in the environment occur when you move to higher elevations, especially in the mountains to the east of Tucson, but we were camping on the west side and didn’t feel like a drive across the metropolitan area.  So we spent our time looking more closely at what was right around us, instead of charging across the park trying to cover it all.  We camped in a fabulous county campground right next to the National Park, which was quiet and dark, and a little eerie with the howling of coyote packs throughout the night.  The serious RVers put string LED lights under their RVs at night, probably to keep the varmints away.  Lots of lizards scurrying around, and we managed to avoid the one rattlesnake we heard was near the trail up ahead of us.

The aforementioned local informant was Daniel Beckman, the son of Bob and Susan, previously chronicled in the post college friends.  Daniel grew up outside Philadelphia, attended Brown, where he did things related to political science and theater, and then during an internship at Joshua Tree National Park, fell in love with the big spaces of The West.  He now works for the Park Service, and is involved in activities such as invasive plant eradication, while attending the local community college to learn all the applicable science he didn’t learn in college.  (We unfortunately missed seeing him in his role as the Park mascot Sunny the Saguaro, which he undertook for the Park Service 100th anniversary celebration at Saguaro one day we were there.  We think he saw us coming and hid so that I couldn’t post any photos of him in costume.) 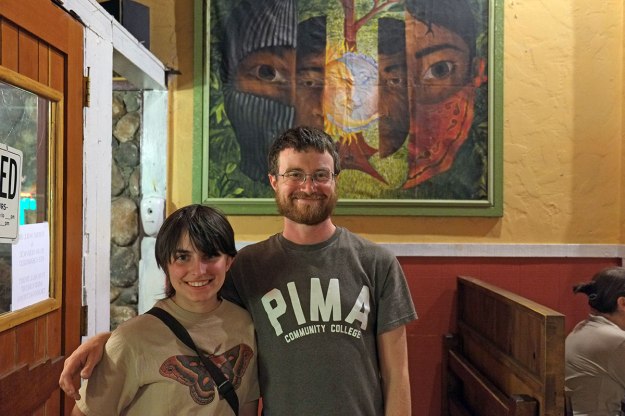 We went to the neighborhood Mexican restaurant near his house (which in itself might be enough of a reason to move to the southwest), and as two East Coast refugees, we talked a lot about the the differences in living in the two different places, and how one can know when you’ve found the right place.  I was impressed with his willingness to strike out into unknown territory, to change his location, his intellectual focus, and his whole way of living – something that’s not easy to do at any age.  But Daniel seems very happy in his new life, and perhaps he has found the right place for him. 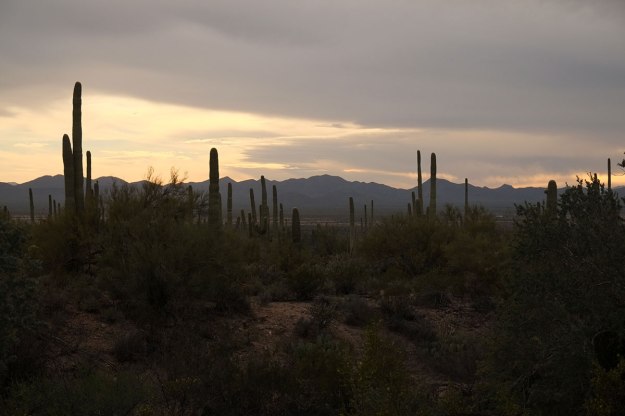