As I tried to plan our trip across the deep South, major destinations didn’t jump out at me.  The small towns and cities are not very notable architecturally, the landscape is flat and pretty monotonous, and there aren’t a lot of museums, other than those of local history.  So we turned to the maps of Roadside America, which highlight tourist attractions that may not be worth a trip on their own, but do provide a bit of relief on an afternoon’s drive.

If South Dakota is the center of western kitsch, Florida is the king of the kitsch in the south.  There are carloads of tourists looking for distractions and kids to be entertained.  Panama City Beach has a main drag with one fantastic apparition after another.  There is the sinking ship at the Ripley’s Museum,

and the upside-down building of Wonder Works, very nicely done. 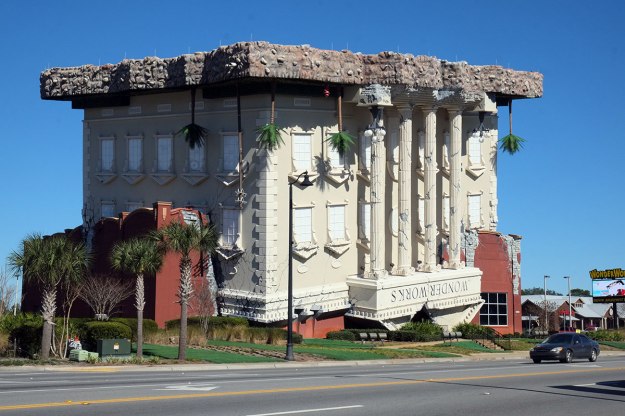 There are so many fiberglass sharks that we stopped paying attention, but being Northwesterners, this beautifully-sculpted killer whale (that’s what they’re called in Florida) got our attention. 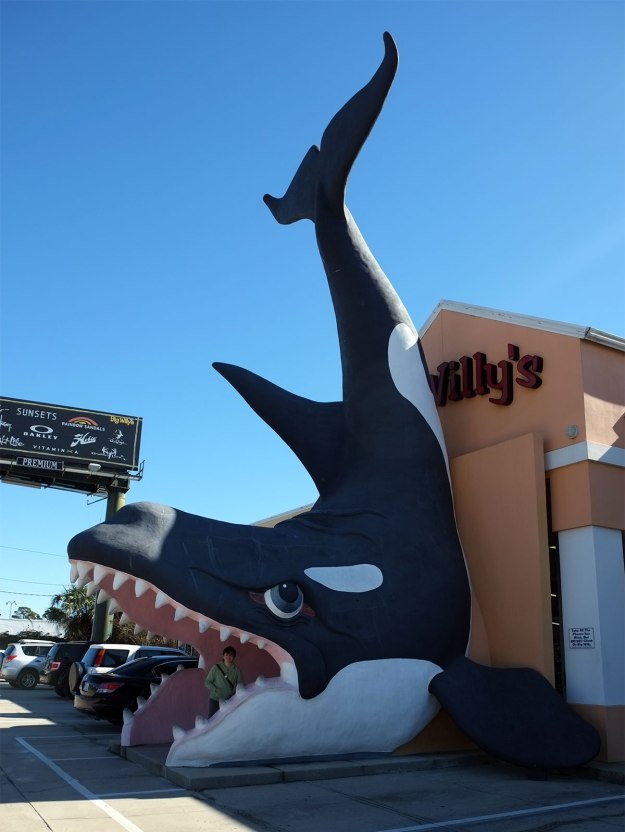 There is the local chain of beach stores, Alvin’s Island.  This is the most expressive of their locations. 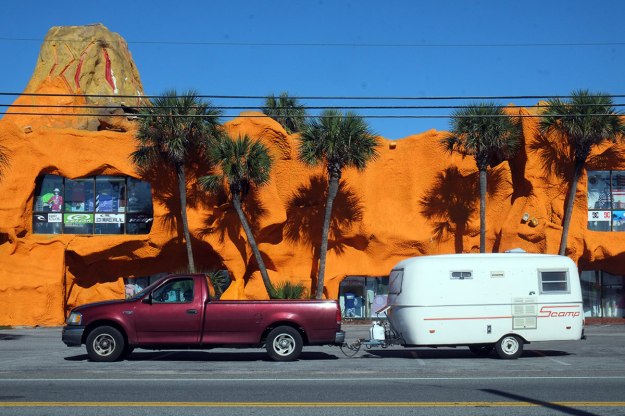 And the Goofy Golf, which unfortunately was defunct.

The flip side (literally) of this showmanship is the mind-numbing banality of the standard buildings – huge walls of condos and hotels facing the Gulf.  Route 30 through Panama City is the urbanistic equivalent of a mullet haircut – all business in the front and party in the back.

The kitsch on the Atlantic Coast is of a different order of magnitude.  Gulfstream Park is an older horse track in Hallandale Beach, which is being redeveloped with a casino.  The developer had a vision of a Pegasus fighting a dragon, and a 120-foot tall bronze sculpture (yes, real bronze!) is the result. 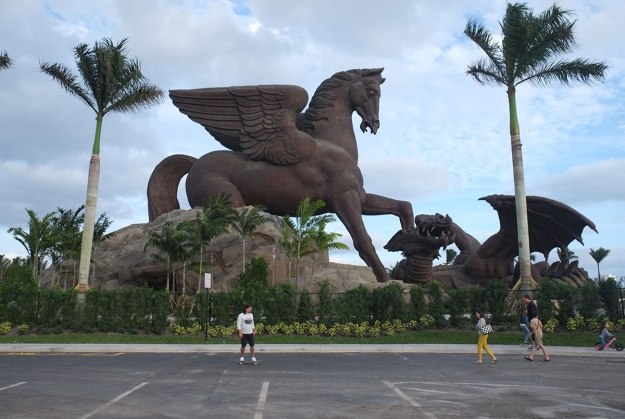 Events can be kitsch too.  On a rainy and cold (for Florida) New Years Day, we were wandering around downtown Jacksonville, and stumbled upon a pep rally for the impending bowl game between Georgia and Penn State.  We caught the impressive Georgia band and cheerleaders (and discovered that Georgia had long ago co-opted the Battle Hymn of the Republic to be their football fight song – a striking act of musical kitsch on its own), but Greta was mainly impressed by the waves of shivering high school cheerleaders performing in the rain. 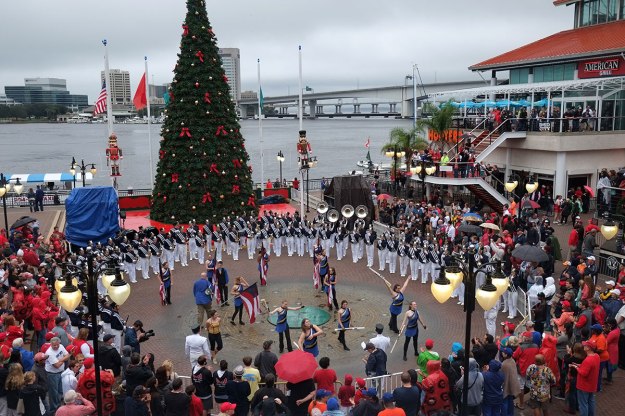 Then there is ironic meta-kitsch.  At the Margaritaville Resort hotel in Hollywood, there is this monument to the blown-out flip-flop and pop-top in the lobby.  The label beautifully parodies the pretensions of museum labels everywhere, with its reference to POP-top-ART. 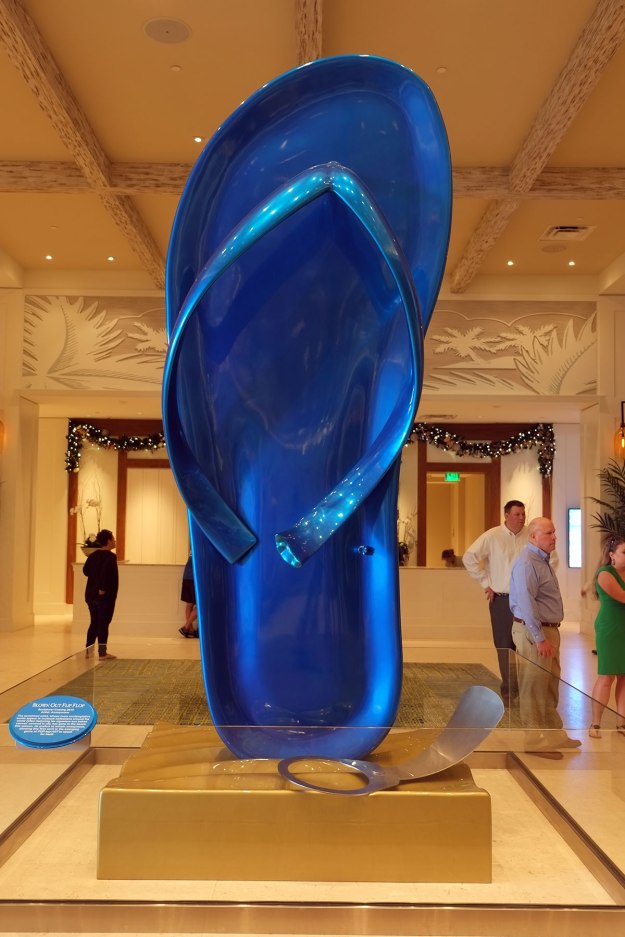 Outside a tattoo shop in St. Augustine we found sophisticated syncretistic kitsch – our first Bathtub Madonna complemented by what appears to be a HIndu goddess. 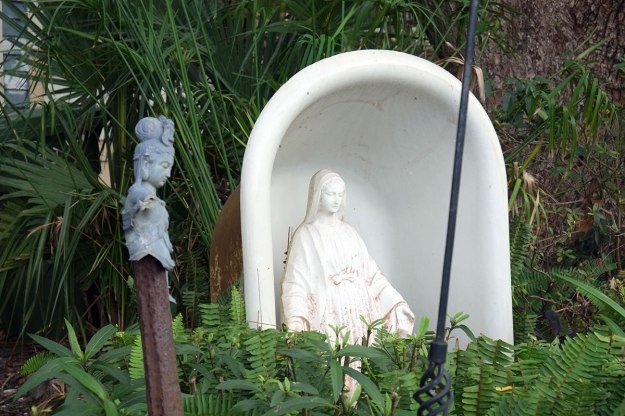 Even non-kitsch locations in Florida can’t resist the allure.  At Homosassa Springs, a state park with resident manatees and a wonderful small aviary, there is a snowman on the bayou. 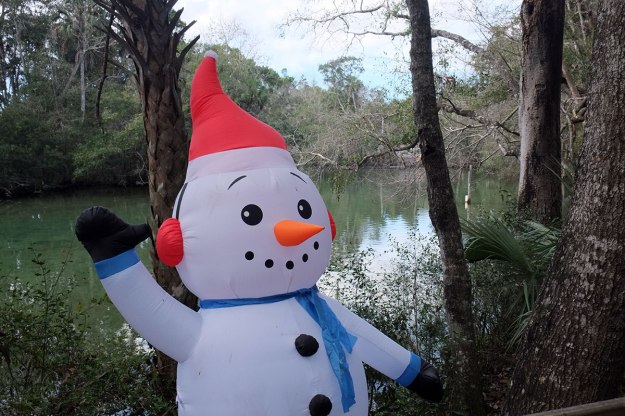 The kitsch continued in Georgia.  At Tybee Island, outside Savannah, there is the Fish Art establishment, where a local artists sells his visions: 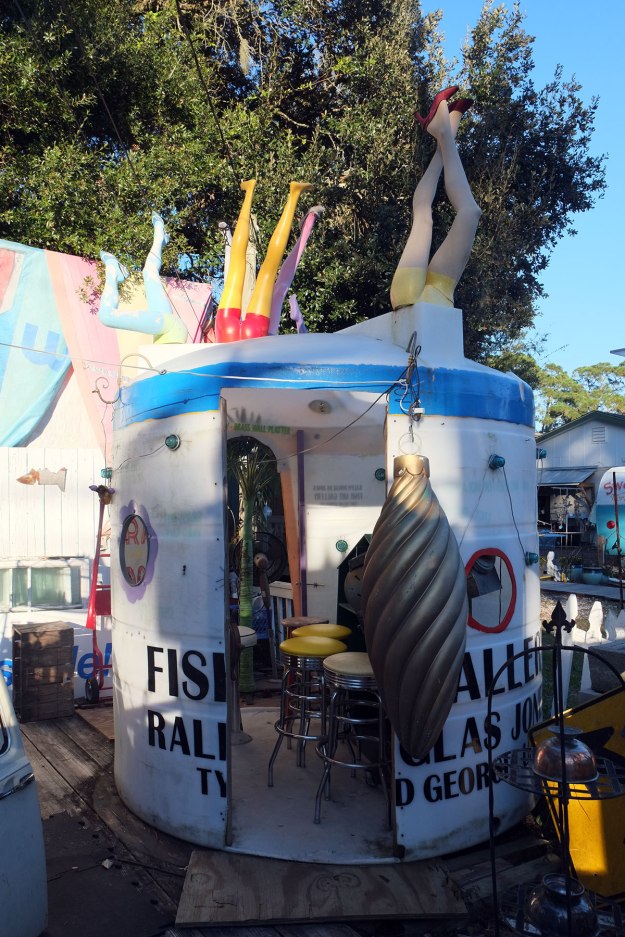 down the road from a religious billboard which could support at least one article in the Journal of Religious Iconography and Semiotics.  (Note that this is not the only God+sailboat imagery we spotted in Georgia.) 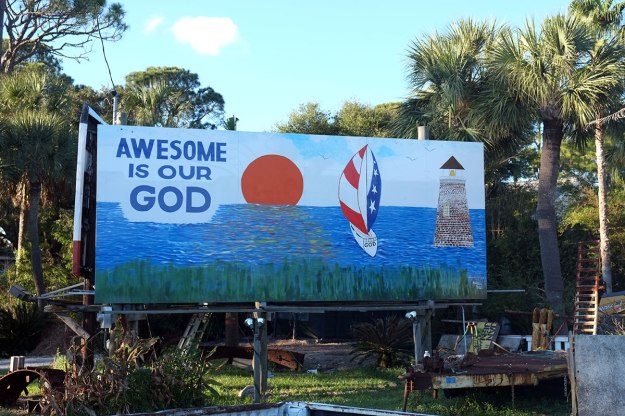 Ashburn, Georgia was worth a small detour to see this lovely large cow, 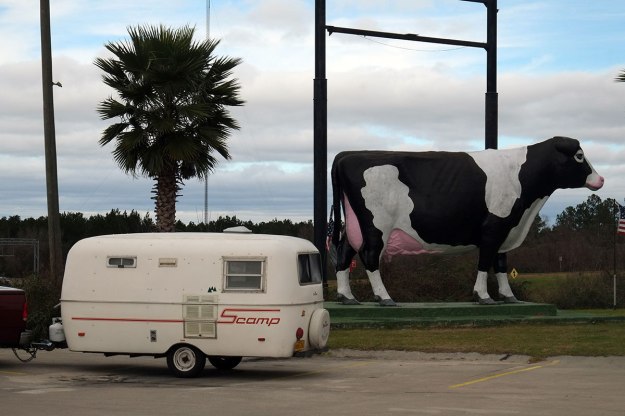 as well as the World’s Largest Peanut (which frankly didn’t look that big to us). 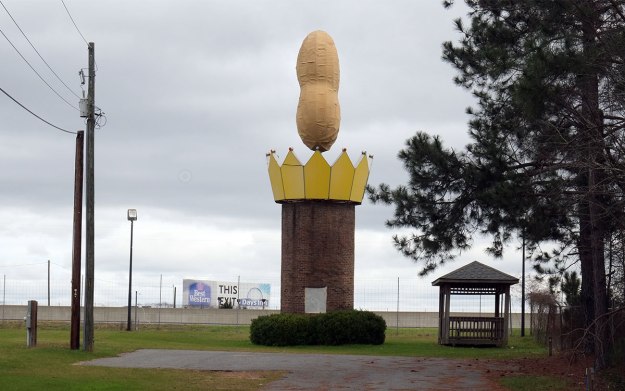 A short drive to Albany, Georgia, hometown to Ray Charles, who is memorialized in the riverfront plaza, fountain and bronze statue. 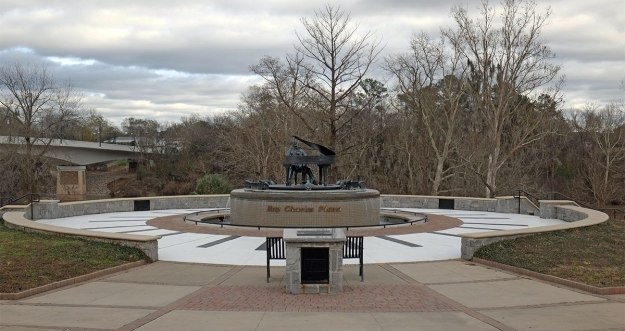 The statue revolves slowly, while a few of Ray’s classic songs play from speakers.  We caught Georgia on my Mind and loved it, as it continued our musical tour of Georgia appropriately.  (There were no speakers at Duane Allman’s grave, but we did play One Way Out on Greta’s phone while we paid our respects.) 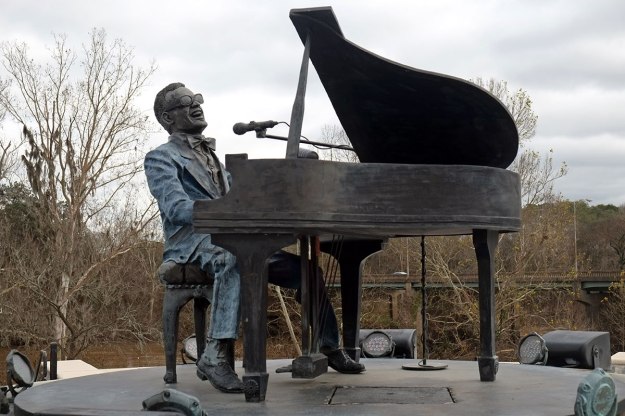 Back in Florida, we went to the Wentworth Museum in Pensacola.  It is now an informative and tasteful municipal museum, but its roots are in the eclectic and expansive collecting of T.T. Wentworth Jr., 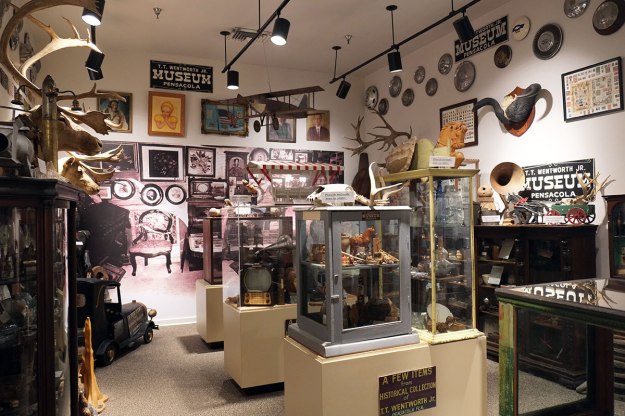 which included such wonders as this petrified (actually, mummified) cat, 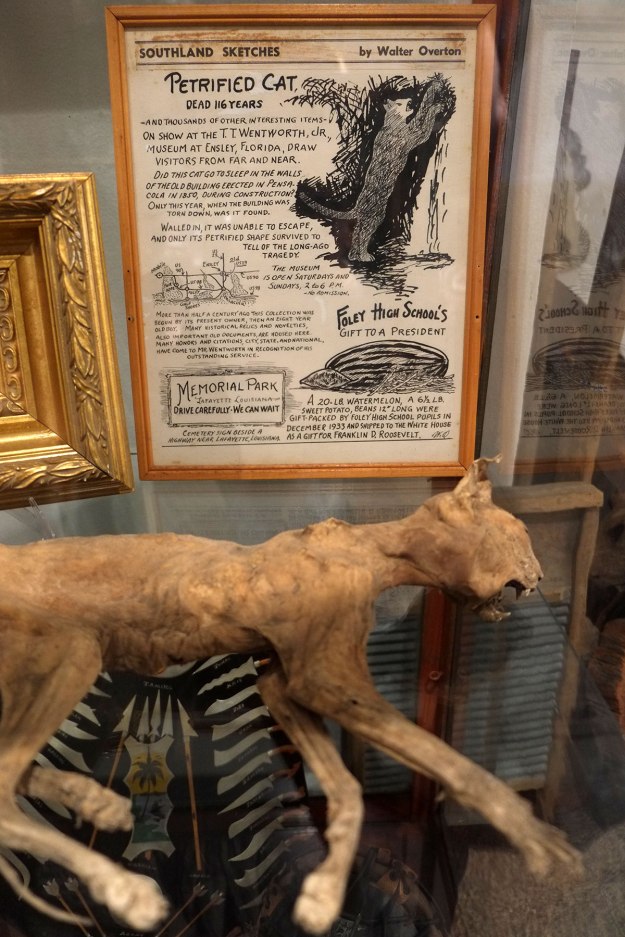 and a remnant of Thomas Edison’s 81st birthday cake. 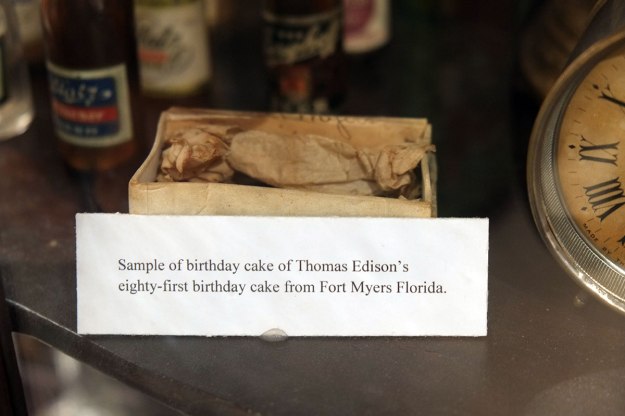 The kitsch extended to the architecture on the Panhandle.  The UFO House at Pensacola Beach, which is actually a 1960s pre-fab fiberglass house from Finland.  I thought the PVC colonial-style railings from Home Depot added a nice touch. 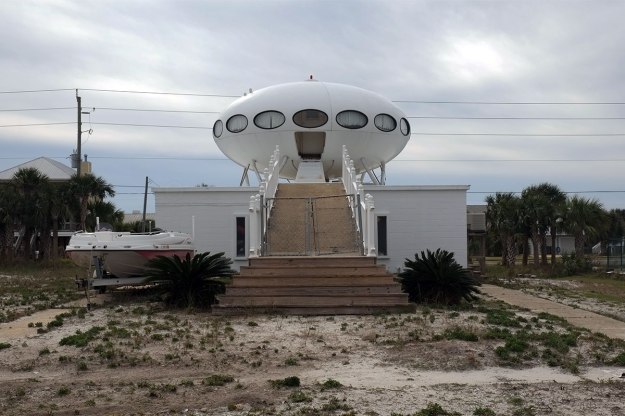 and we considered adding a bedroom to our little trailer. 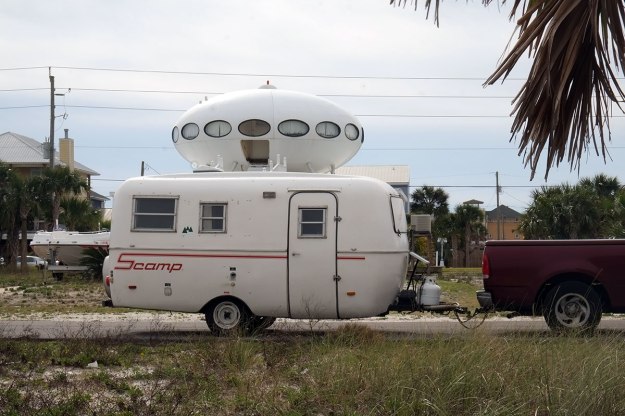 At Destin, we went to see the truly creepy double-decker bus filled with mannequins outside an Irish pub, 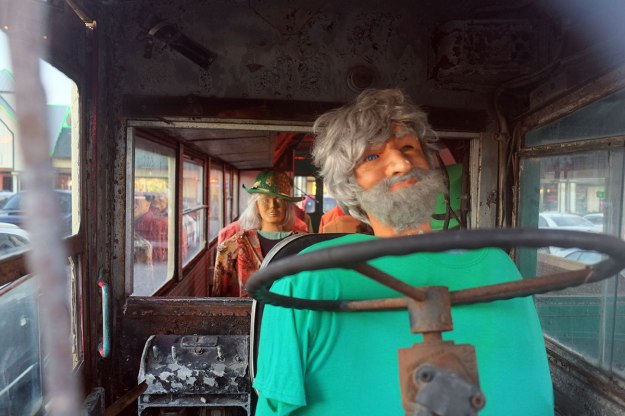 which fortuitously led us to the World’s Most Awful Condo, right across the street: 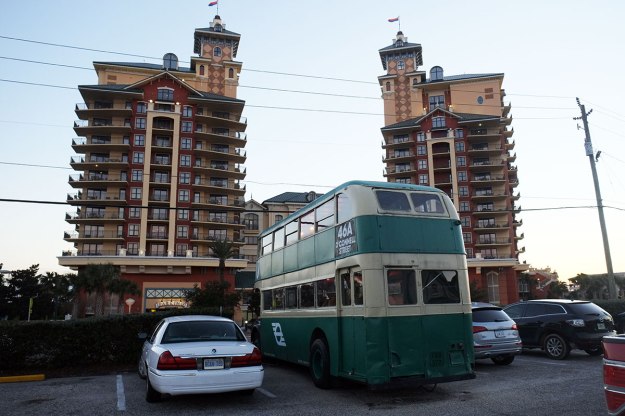 It was remarkable – we couldn’t stop looking at it.  It is the greatest collage of motifs and elements I’ve ever seen.  The architect had the brilliant insight that the two sides of Route 30 could be united:  the nuttiness of the tourist attractions across the street could be grafted on to the gigantism of the Gulfside condo.  Even the architect of the Margaritaville Resort – a hotel based upon a sybaritic pop song – had still felt the need to design a tasteful and luxurious edifice.  And I must say, if you can accept the basic premise (firmly grounded in Learning from Las Vegas) this one is pretty skillfully done.  (See what a couple of weeks in Florida has done to my sensibilities?) 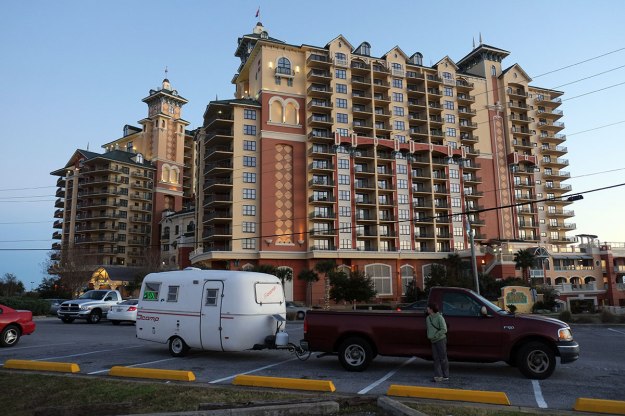 But our favorite installation was outside Theodore, Alabama:  the sublime Chicken El Camino: 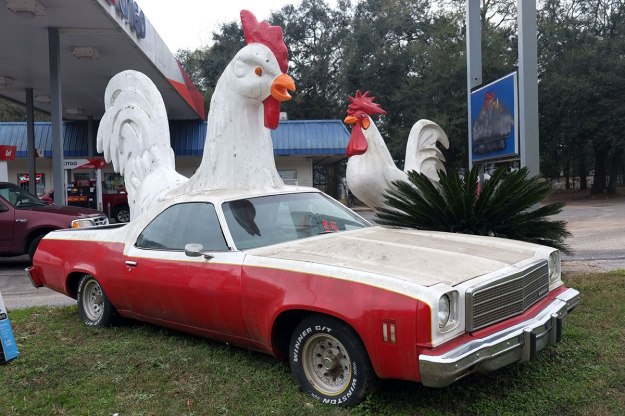 A local man saw me taking photos and called out to me:

“Do you like those chickens?”
“I love the chickens.  And my wife loves El Caminos, so I’m taking pictures for her.  I read that this used to be a fried chicken stand, is that true?”
“I’m not sure, the chickens have been here as long as I can remember, and whatever store is here has always sold some chicken, though.  Where you folks from?”
“Oregon.”
“I hear it’s beautiful there, but I’ve never been. Actually, I’ve never really been anywhere.  Never got too far away from these chickens.”