Northern Louisiana seems to be a different world from the coastal region.  We drove north from New Orleans along the Mississippi on River Road, where two different eras collide: there are the ante-bellum plantations, and there is the modern industrial landscape.  But you can never actually see the river – the levee forms a wall along the road that’s probably 40 feet tall. You see ships looming over it, so you know that there must be a river there somewhere.

Among the many plantations around, we decided to go to Oak Alley, as we had been told it had the quintessential allee from the river to the house.  As in all houses we’ve toured in the South, the family who built this plantation was very important, with lots of governors and senators etc., but we promptly forget all this family stuff after hearing it (another reasons we could never be southerners).  We’re just here for the architecture, which did not disappoint.

The allee is spectacular, and must have been more so when there wasn’t a levee at the end. 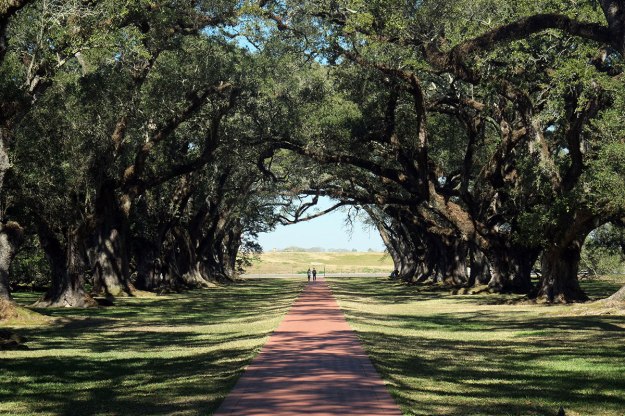 The Greek Revival style is done beautifully, well-proportioned and straightforward. 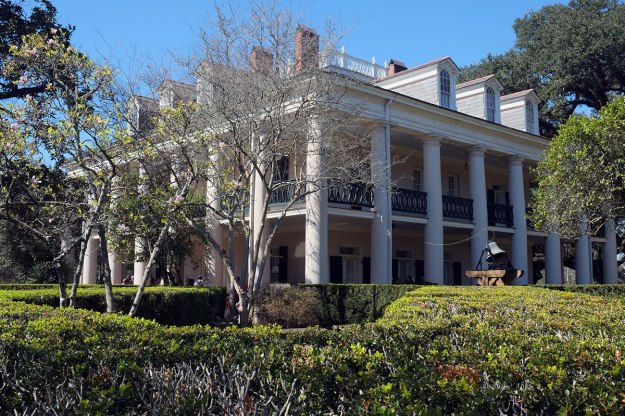 The main rooms are all large and beautifully lit, being always on a corner. 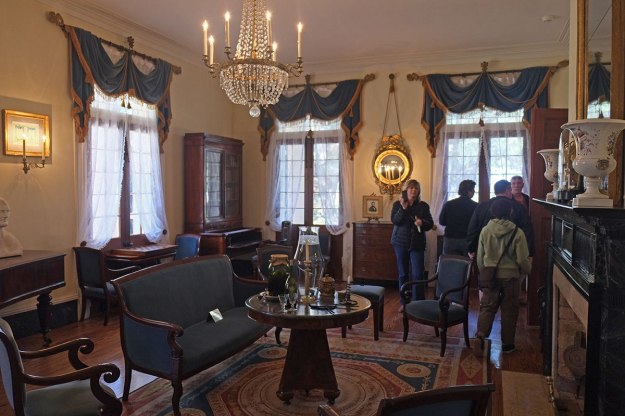 The word thing hanging over the dining room table is for shooing the flies away.  A young slave would have sat in the corner of the room pulling on the rope to make it swing. 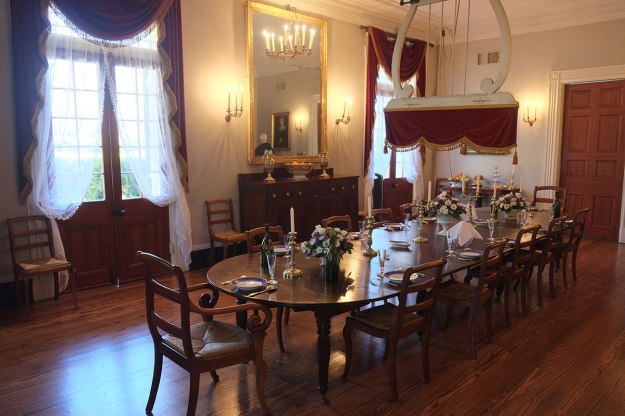 The two-story verandah on all sides was exactly where you’d want to hang out. 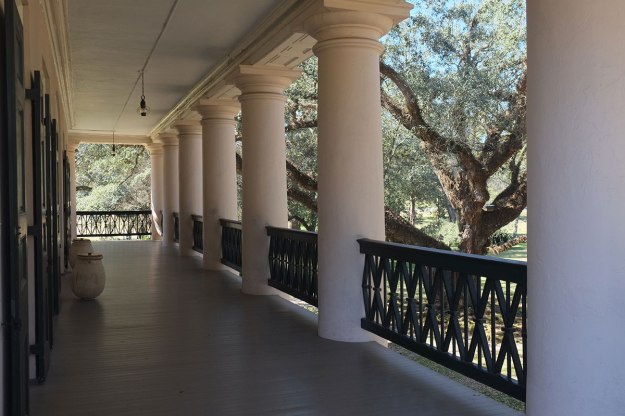 Having now seen examples in Florida, Mississippi and Louisiana, the essence of the type is pretty clear, and it is a very straightforward and sensible reaction to the climate, which must be unbearable in the summer (we were there in February and it was quite warm).

As with all plantations we’ve visited, the paramount question is how the history of slavery is treated.  As we toured the house, surrounded by tourists oohing and ahhing, we were feeling pretty weird – the architecture is fabulous, but it’s pretty hard to listen to stories about this family and think about the basis for all this wealth.  (We decided it would be like going to Auschwitz to see the commandant’s quarters.)  However, compared to what we’ve heard about other plantations, we thought Oak Alley did a good job of presenting the reality of the history.

The slave quarters here were located on along the central axis, but to the rear of the house, and along another oak alley. 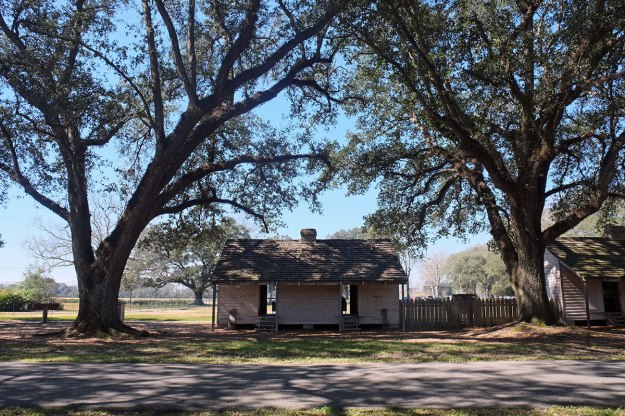 This arrangement, and their proximity to the main house, was very unusual.  The quarters had obviously not been as carefully preserved, but enough remained, and there was also documentation of them and how they had been transformed after the Civil War, when they were occupied by paid hands (who might have been the same people, just no longer enslaved).  Based upon this evidence, all the slave quarters had been reconstructed, showing how they were furnished in different eras.

The plantation records had also been searched, and a list was compiled of all the slaves whose names could be found.  In one of the cabins, where there was a detailed exhibit on what is was like to be a slave, and how the slaves were treated, the names of the slaves from this plantation were inscribed on the end wall.  We thought it was a dignified and fitting memorial – acknowledging the individuals as best they could, working in the vernacular materials that reflected the physical surroundings and reality of these persons’ lives. 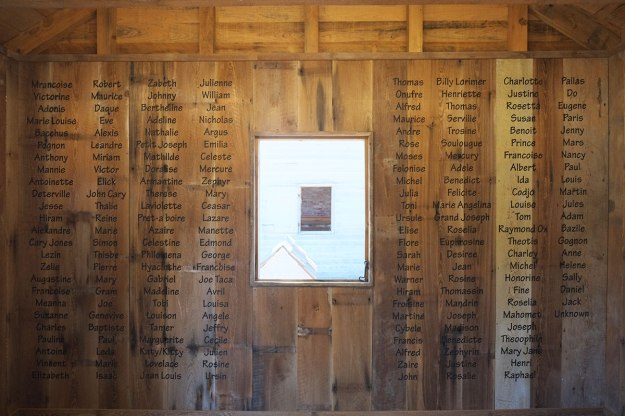 Most of the drive was through the oil and chemical industries’ landscape.  Very large facilities and big things, which we enjoy seeing.  Just glad we didn’t have to live there.

Our visit to Baton Rouge was stymied by a cell phone charger in the truck which we thought was working, but was not.  So just as we hit a major city, our phones went dead and we were navigating by instinct.  The downtown seemed to be having some kind of festival, coinciding with lots of streets being closed for construction, which made it even more difficult.  We passed by the state capitol (a pretty good one we thought, in the rare genre of capitol-as-tower),

but mainly we spent a lot of time trying to find a store to buy a charger, before realizing that all stores like that are way out in the edge sprawl.  We gave up Baton Rouge, crossed the river and found a Walmart, and continued on our way.

We left the Mississippi and crossed the Atchafalaya Swamp towards Lafayette, and headed up the Red River to Natchitoches (which is pronounced Nack-a-dosh), an important French colonial town.  It has a few streets of nice old commercial buildings, some of which have been excessively cute-ified for the tourists, but many of which are fine.

There is an excellent Catholic church.

The river flows through the center of town, with the buildings sitting on the higher ground above the floodway.  The lower area by the river is used for a park, parking, and river access, a really nice way to make an open space while acknowledging that this will flood.  (A few weeks after our visit this area did indeed have some major flooding, but I wasn’t able to find out how the town fared.)

Not all the buildings are old and quaint – it is the home of the Northwest Louisiana History Museum, which was for some reason combined with the Louisiana Sports Hall of Fame.

I was very surprised to find such an edgy building in such a location – the folks at Trahan Architects have clearly been reading their magazines, and the skin was the hippest we’d seen since Miami.

Strangely, it looked pretty darn good in the town – the massing is simple and in scale with the surroundings, the entry space under the floating screen wall relates to the verandah architecture of the nearby commercial buildings, 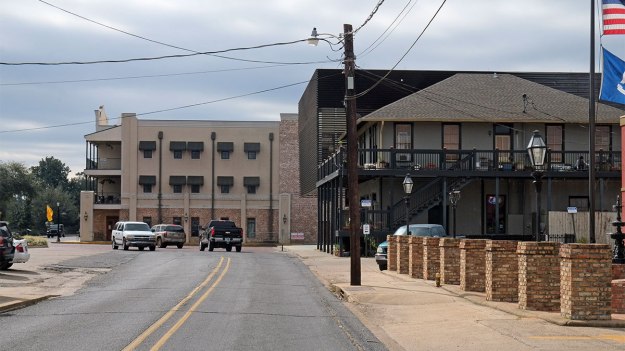 it’s dark-colored, and it anchors a funny shifting intersection.  On the whole, it was much better than the pseudo-historicist buildings we saw there (such as the one beyond it).  It was Sunday so we couldn’t get inside, which was too bad, as Glen and Michelle had designed some of the exhibits.

We hadn’t heard great things about Shreveport, but we enjoyed it.  We stopped for lunch at Strawn’s Eat Shop (we found it through Roadfood.com, and couldn’t resist the name).  Food not worth blogging about, but we liked the ambience.

We saw what was clearly the older expensive neighborhood, 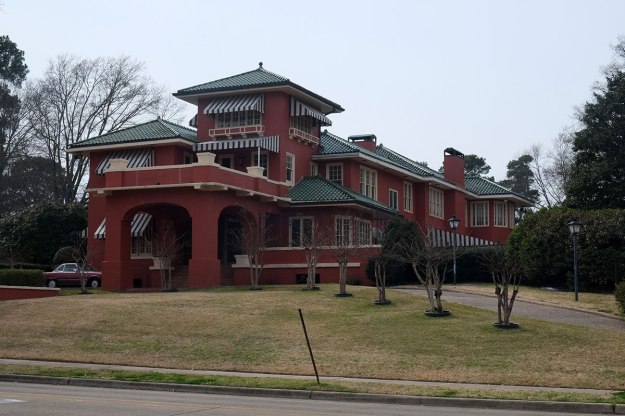 and then perhaps the worst Pomo building in the world, even uglier than the Jacksonville courthouse.  Casino architecture is inherently strange, but cheap casino architecture may be the most depressing stuff around.

But by far the highlight of Shreveport was the Waterworks Museum.

They ran their municipal water system on steam power until 1980, and then when they revamped it all, they preserved the whole earlier plant, with boilers, pumps, controls, settling tanks, labs, etc.  It was superb. 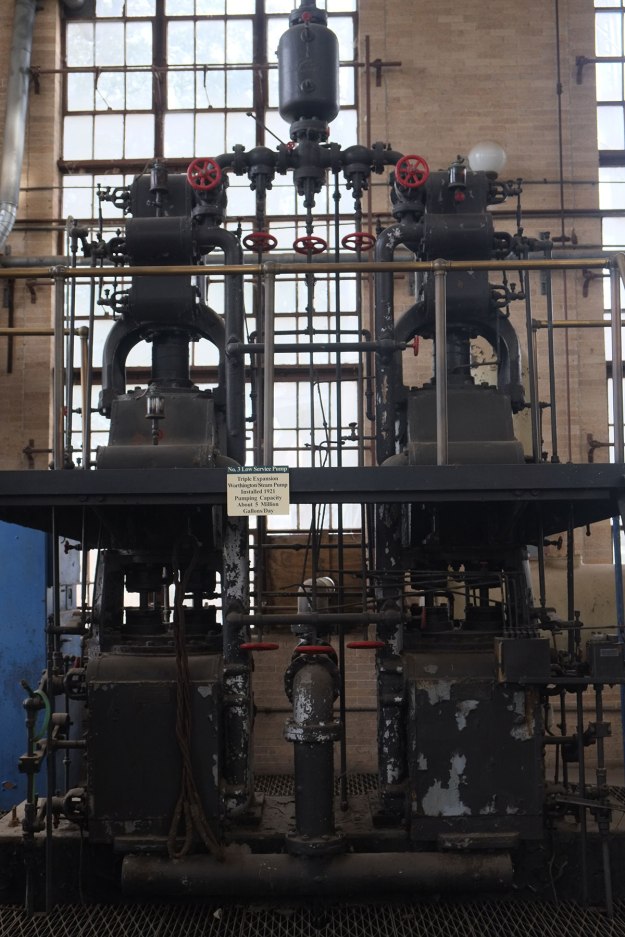 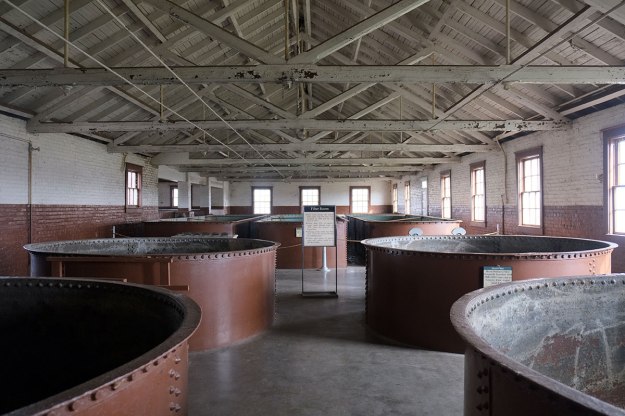 We randomly arrived on a Sunday afternoon, and were able to join a tour with a group of cub scouts, which had an excellent guide who clearly loved the place.  As I’ve mentioned, neither of us especially likes visiting historical places where something once happened, but there’s no visible evidence.  We like seeing real stuff ([preferably Steanmpunk stuff), and this was about the best industrial archaeology we’ve seen on the whole trip.