Charlottesville is not your typical college town. Compared to the college town I know best, the population of the city is much smaller relative to the size of the school, yet in some ways there is more going on in Charlottesville that isn’t related to the university. The historic center of the city is substantial, with many significant large houses and civic buildings, and they had the good sense to not knock it down during the urban renewal craze. (Instead, they seem to have razed an adjacent poor African American neighborhood.)  I’m assuming this is because the city had a prior existence, and the size of the city was larger relative to the university in the past, whereas most college towns probably wouldn’t have grown very much without the presence of the college.

There is a pretty active downtown pedestrian mall, something that always intrigues a Eugenian who remembers our past disaster. The differences in Charlottesville seem to be: they kept all the beautiful 19th-century commercial buildings, the mall is only one street wide, local traffic can cross it frequently, and the residents of Charlottesville have a lot more money to spend in nice downtown restaurants and such.

But once you move a block or two away from the mall, into the neighborhood that was destroyed, the dark side appears: a zone of wide streets and much traffic and car-oriented buildings in the center of town. (And of course like any other American city, the edge of town is big-box sprawl madness.)

The inner neighborhoods are intact and lovely, with houses from a range of periods, and a nice open space or two.

And so began the fascination with southern cemeteries.

There are even houses by noted architecture professors – I’ll leave it to you to guess which: 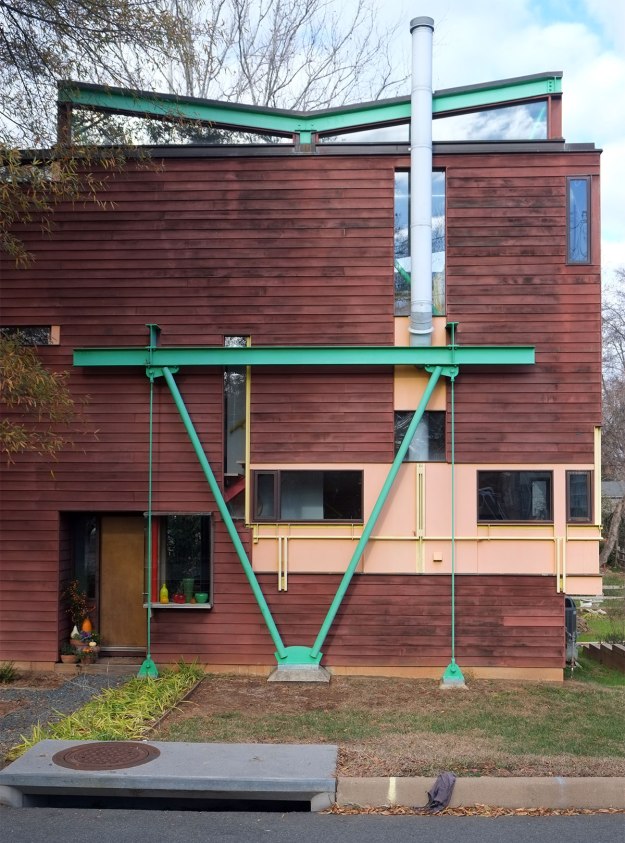 But the main reason Charlottesville is not like other college towns is that they didn’t have Thomas Jefferson. His designs for the Rotunda and the Lawn at the University of Virginia are astounding.  I had seen them years ago (as a high school kid who almost went to UVA), and had studied them quite a bit in college, but stepping out onto the Lawn still stunned me.  We have seen a lot of great architecture and landscapes on this trip, but there are those places that just stand out from everything else.

The Rotunda has been undergoing a substantial restoration in recent years, and luckily while I was there, the new carved capitals were revealed.

When you have a UNESCO World Heritage Site, you do it right. No PVC here.

But even more than the Rotunda, it has always been the Pavilions which intrigued me. Jefferson worked with a repetitive, modular system, with the elegant colonnades in front of the students’ rooms. 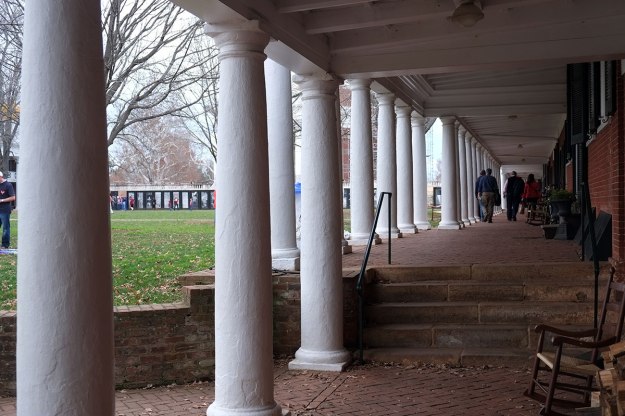 and took a similar approach to the Ranges, which are to the outside of the Lawn:

But within this approach, he introduces variety into the system. First, the difference between a colonnade and an arcade

(and then uses the gardens with their serpentine walls to separate them.) 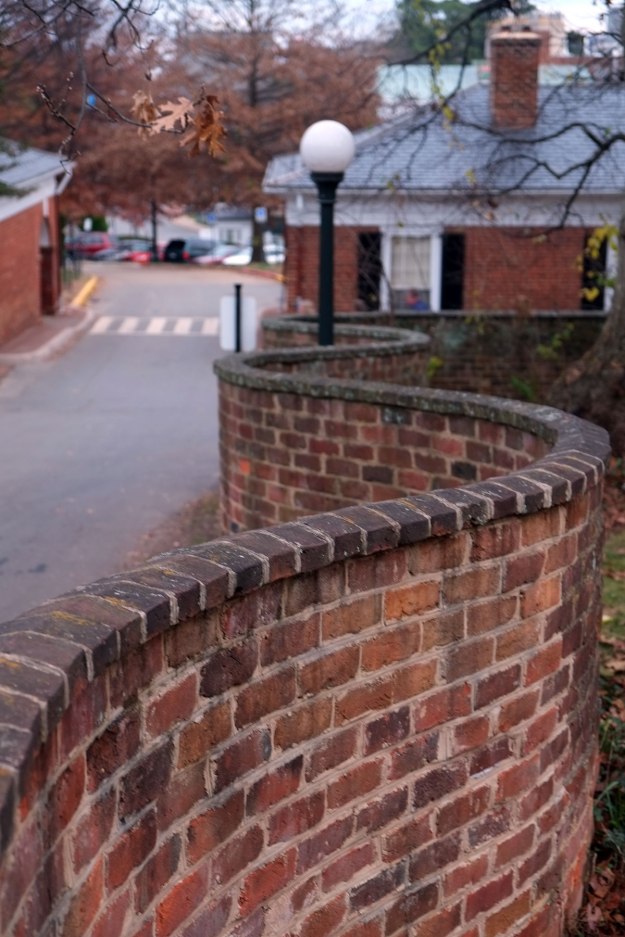 Second, in making all the Pavilions unique. They are the same scale, and they fit into the system in the same way, but each one is a gorgeous exploration of the range of ideas possible in the classical vocabulary. 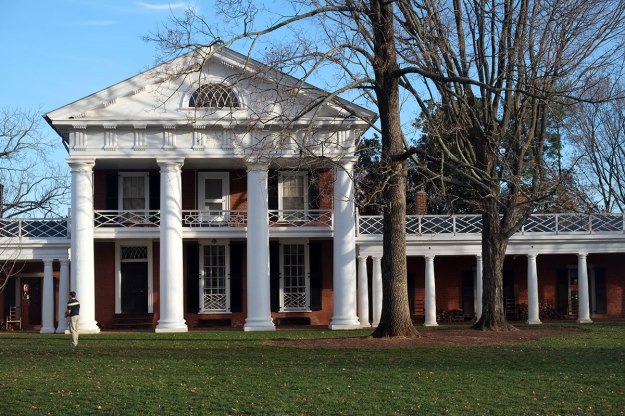 It is not just about style, but about spatial imagination. The way the colonnades intersect with them changes. There are colossal orders 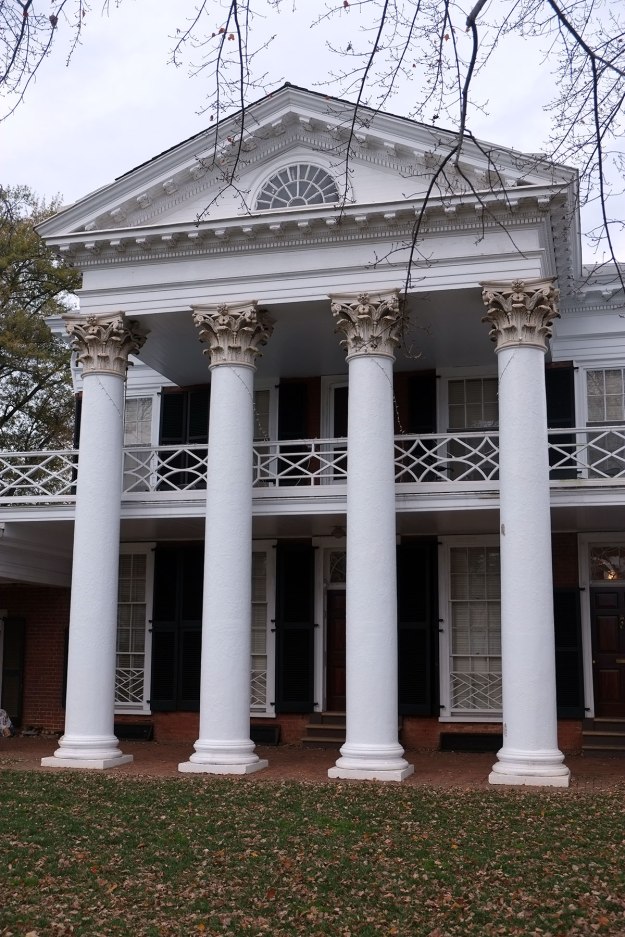 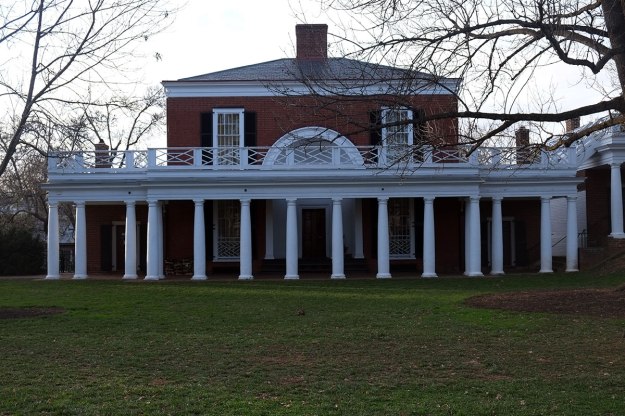 There are delicate and sedate pavilions, and robust ones, with the appropriate order used for each.

I’ve seen a lot of mediocre Academic Georgian on this trip, where all that matters is the proper vocabulary, and not the quality of the design or the character of the whole campus. (William and Mary comes to mind – ghastly pedestrian buildings repeated mindlessly.)  Jefferson shows the richness of the classical language, in a way that we’re probably not capable of now. (The decline of Postmodernism illustrates this well.) It brings to mind the joke about the couple who went to see Kahn about having him design a house for them, which he was happy to do.  But then they mentioned that they’d like it to be in the Georgian style.  Kahn said he couldn’t do that, so they asked him if he could recommend a good architect who could.  Kahn thought a bit, and then said, Thomas Jefferson.

So how has UVA fared in the post-Jefferson era?  There are some eclectic 19th century buildings, before the veneration of Georgian peaked in the early 20th century, but then they did have some good and inventive designs in the style, although maybe taking the goal of variety a little too much to heart.

The city itself has fared less well, with some truly execrable examples.  (Sorry, reality intrudes.)

And a few examples of how one can be contextually sensitive without copying the style.  This 1970s bank struck me as quite good – similar scale, materials and overall form, without copying style, rhythm, or details

and with the more overscaled, modern elements tucked away in a courtyard. 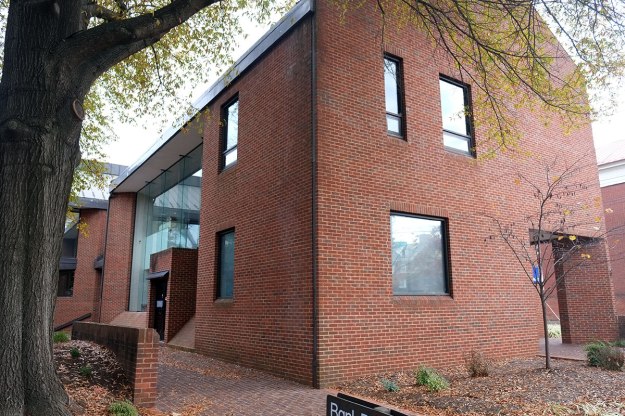 We are used to thinking of Postmodernism as having tried to correct the anti-contextualism of Modernism, but we often overlook the modern buildings that already did this quite well. (I noted this in Cambridge too.)

Kahn was right – we should just leave Georgian to Jefferson – he was remarkable, especially for someone who had a time-consuming day job.  I did go to see Monticello – on a gorgeous crisp day, after waiting through four rainy ones.  It was invigorating, although less perfect than the Lawn.  Monticello was Jefferson’s own house, so he could do what he wanted – play with ideas, change his mind, add on later.  The principles of variety and exploration could dominate – it didn’t need to have the resolution of an important civic work.  In the Lawn you get the perfection of a few big ideas worked through rigorously;  at Monticello you get exuberant pieces all getting along quite well, while not as concerned as to how they add up.  It was a wonderful afternoon, but unfortunately my computer somehow ate all my photos as I was downloading them, which is not a disaster, as photos of Monticello are not hard to come by.  Or as Greta would say, just go.