Many of our readers have remarked that my blog posts are like architecture lectures.  Any of my students reading this can attest that what I have to say about Savannah already is a lecture.  I’ve been giving this lecture about Savannah for years, and on this trip we just returned there so I could get better photos.  Actually, we returned to Savannah four years after out last visit because it is one of our favorite cities – even Greta doesn’t get tired of walking through this beautiful and varied place.

If the character of Charleston depends largely on the building type of the single house, the character of Savannah is wholly dependent upon the brilliance of its plan.  It was laid out by James Oglethorpe in 1734 as a military camp, and it is incredible to think that his ideas on the hierarchy of a camp filled with huts could lead to perhaps the most sophisticated town plan in the country.  This is the famous print of Oglethorpe’s original layout:

The basic module of Savannah’s plan is the “ward” – the repeating arrangement of streets that surround a square.  Most planned American cities are based upon a simple grid, where every street is the conceptual equivalent of any other, but in Savannah there is a hierarchy of major streets, through streets, formal streets, residential streets, and alleys.

This hierarchy of streets dictates the qualities of the blocks and buildings, with the blocks to the east and west of the squares occupied by civic buildings and mansions.  The experience of being in the city is shaped by this hierarchy too – notice that the squares interrupt through traffic in both directions, so as a pedestrian you can stroll on these streets and though the squares, while the faster traffic moves on different streets.

While the plan of each ward is the same, the development of the squares is very different.  Downtown squares, residential squares, rich neighborhoods, poor neighborhoods – they all have the same underlying pattern with an open space in the middle.  Most squares have a monument in the center,

and we noticed that the person memorialized in the center is never the same person after whom the square is named;  this is not Wesley Square.

Some of the newer monuments are less formal, such as this statue of Savannah’s favorite son, the songwriter Johnny Mercer.

But it is really the spatial and experiential qualities of the squares that makes Savannah such a different place.  They are quiet and beautiful, and everyone in the center of the city is always with one block of an open space.

This isn’t to say that the through-streets are awful – they too are gracious and welcoming, with the live oaks and Spanish moss giving much of the character.

Savannah also has beautiful buildings surrounding these spaces.  There are a couple of squares that have been ruined by 1950s and 1960s buildings, but in reaction to these, Savannah was one of the birthplaces of the historic preservation movement, and the rest of the city core was spared the blight of bad buildings and bad city planning ideas.  There are excellent commercial buildings.

warehouses by the river, 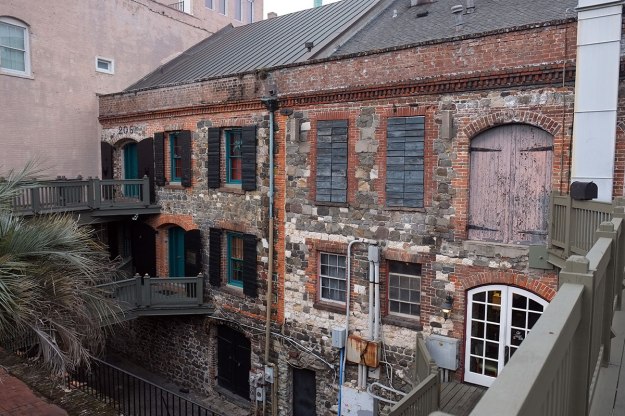 civic buildings (I don’t know the architect for this courthouse, but he was clearly influenced by Berlage and early European modernism). 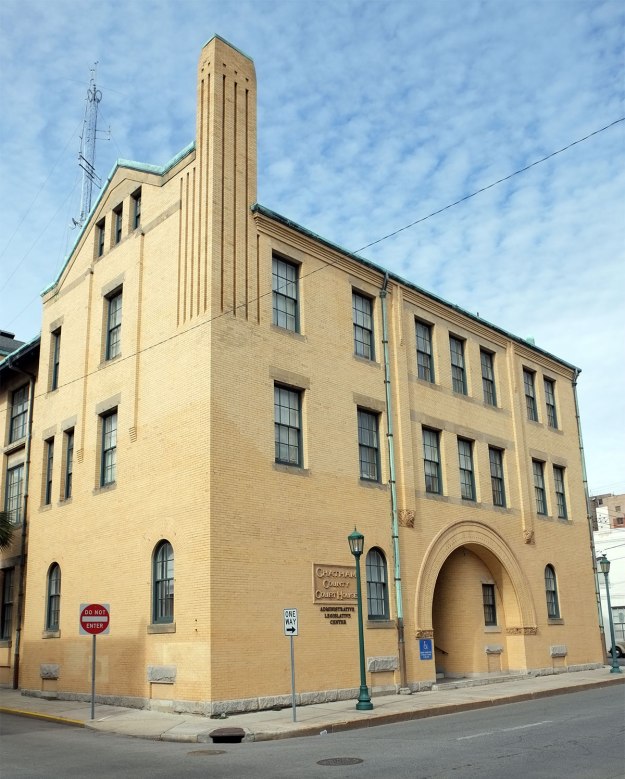 and of course beautiful houses. 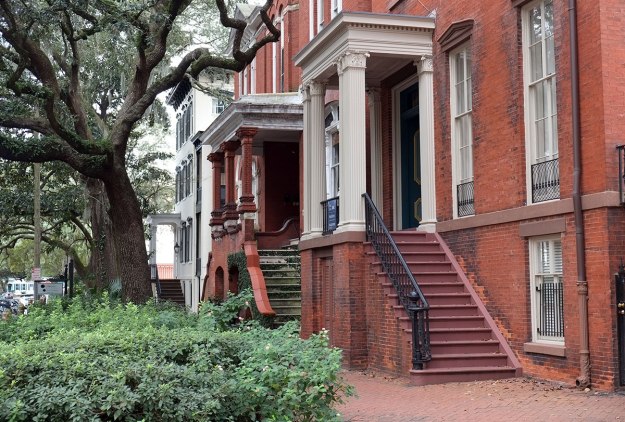 including some tiny old ones.

Our favorite building in Savannah is the Alex Raskin antique store.  Housed in one of the largest townhouses in the city, it is gorgeously unrestored, owned by a former New Yorker, packed with furniture and cool stuff, and gives you a free glimpse of what such a house is like inside.  Partial as I am to Southern decay, I like seeing a house that isn’t all tastefully tricked-out, and where you have to listen to a guide drone on about genealogy. 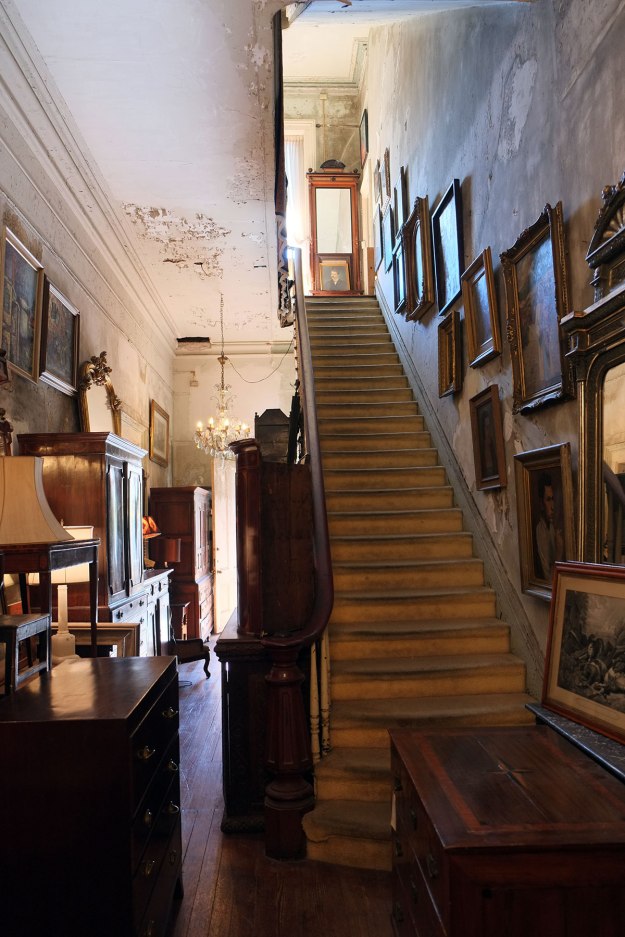 We also walked through many of the 19th-century neighborhoods which flank the large city park to the south of the historic core.  They don’t have the same ward system with squares, but they are good neighborhoods with a variety of styles of frame buildings.

Older housing is being restored in these neighborhoods (for those priced out of the core), and new buildings are being built in historicist styles.

Savannah isn’t completely frozen in time.  SCAD, the Savannah College of Art and Design, has purchased many old buildings throughout the city to house its scattered-site school, and the presence of the school really contributes to the vitality of the city (especially compared to all the other beautiful southern cities which seem to be inhabited solely by affluent retirees).

And new transportation technologies are competing with the old.

Having covered the core of the city on several trips, we ventured out to the coast this time, to Tybee Island, an interesting beachfront town that used to be a prominent resort area.  The lighthouse at the mouth of the Savannah River seemed very tall to us Northwesterners, used to short lighthouses on tall cliffs.

Our march through beautiful old Southern cities continues, with several more yet to come.

1 thought on “Savannah and the ascendancy of the Plan”