One of the reasons that New Orleans is so different from other American cities is that has always been constrained.  Surrounded by Lake Ponchartrain (to the north) and low-lying swamps and marshes in every other direction, the whole metropolitan area encompasses only around 200 square miles, with a population of 1.2 million – approximately half that of Portland’s.  The constraints on New Orleans used to be even more extreme – the originally-settled areas on the ridges (about eight feet high) were only later supplemented by the close-in drained-swamp residential areas in the 19th century, and the more extensive sprawl (such as it is) is all from the postwar era.  So the center of the city feels compact and manageable, while having very imageable, distinct districts.

When the Americans began to move in after the Louisiana Purchase, they mainly left the Vieux Carre alone, and settled upriver, across Canal St.  Canal St. never had a canal, but it was planned for one, and so it is immensely wide.  It is a wonderful contrast to the rest of the city – you emerge from the narrow confines of the French Quarter to the bright, open expanse of Canal.

The buildings form a continuous wall, there are streetcar tracks up the center, and a double row of palm trees.  Bright lights, traffic, tourist attractions and hotels – it is an entertaining and exciting space, one that says, this is a big city.  Also a tropical city – with its white facades and palm trees, Canal feels very different from the grey avenues of the north.

One of the two streetcar lines runs up Canal, and it is a joy.  The old cars are fabulous, and here as on St. Charles, you ride along experiencing the city as it goes by. 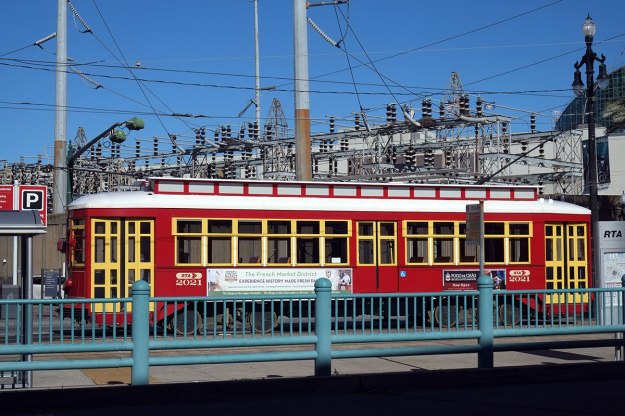 Canal really comes into its own on Mardi Gras – all the large parades end up here, heading up one side of the neutral ground (median) and back down the other.  The scale of the street works with the large crowds and floats – it reminded me of Broadway in New York with the Thanksgiving parade. 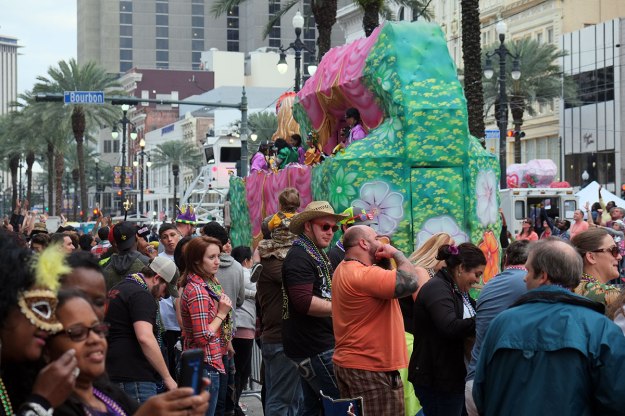 The end of Canal at the River is the center of tourist / convention madness.  Hotels, convention center, casino, aquarium – all the overscaled and blank buildings are here.  It works pretty well- these fairly standard dreadful buildings are clustered and have a minimal impact on the other neighborhoods.  You can just ignore this part of town if you don’t have to go there.

The rest of the downtown is blend of good old commercial buildings and standard mid-century towers. 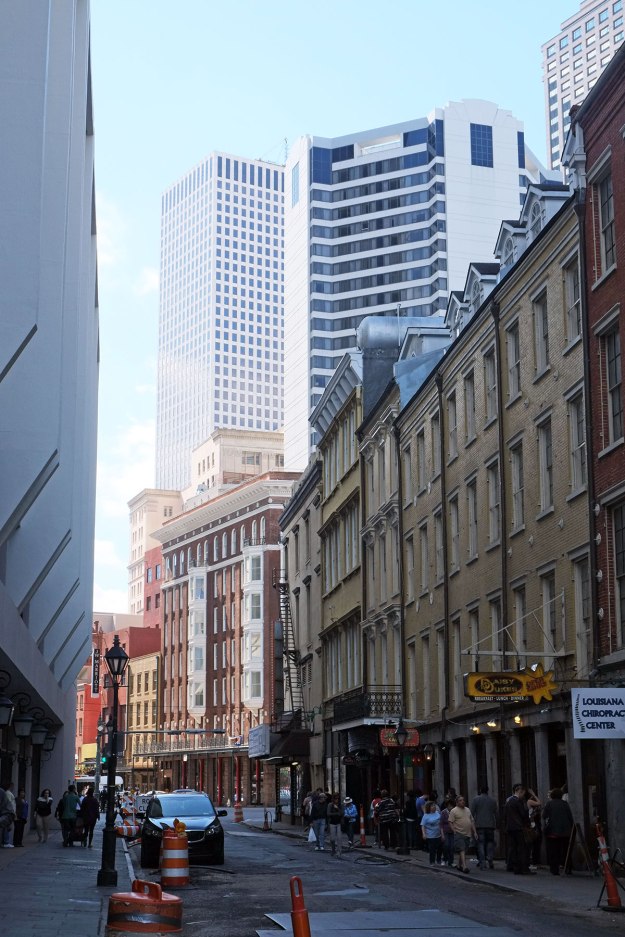 The more recent towers, spawned by the oil boom, are clustered upriver along Poydras Street. 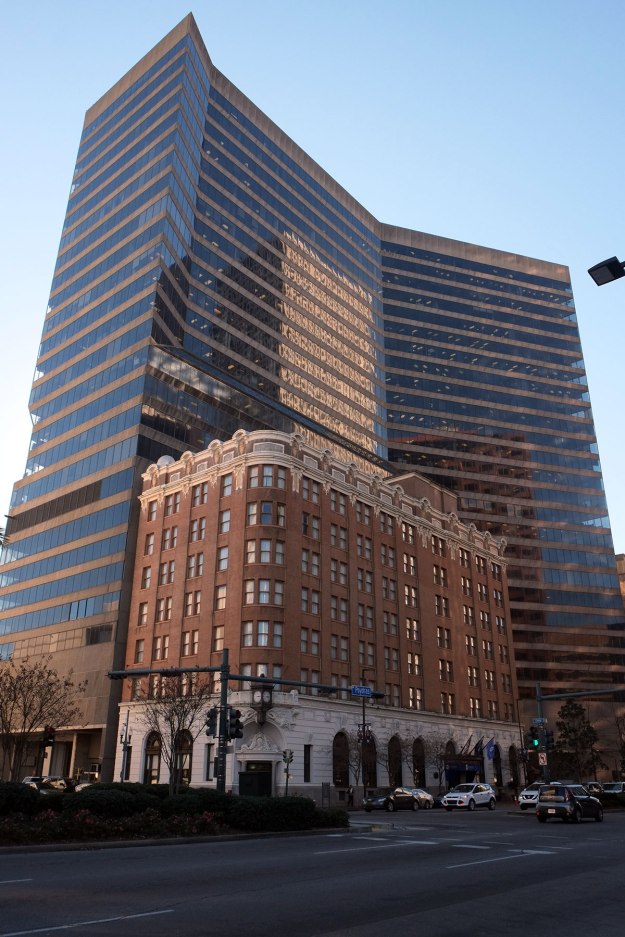 Overall, there is balance between the old and the newer – there are not many places where the gigantism and banality of recent decades takes over.  Although New Orleans’s first skyscraper, the Plaza Tower, is truly inept.  It is now empty, with asbestos and mold issues, and lawsuits apparently flying in every direction.  It’s so bad it might be worth keeping. 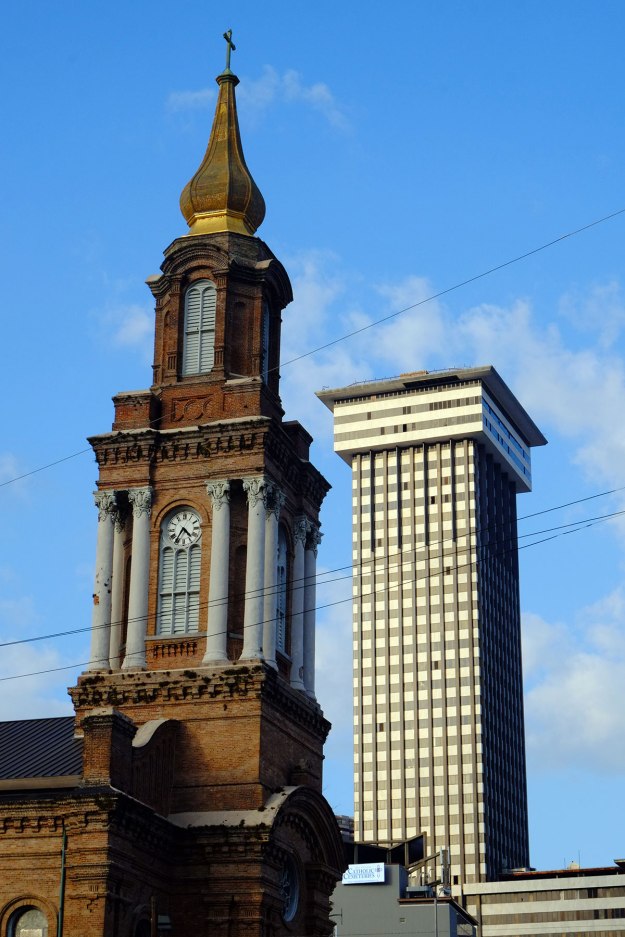 Poydras St. is also the location of Charles Moore’s Piazza d’Italia. It’s a funny little thing – filling in an open space between a skyscraper and a parking lot.  Moore was obviously trying to construct  a place that could be inhabited, unlike the empty modernist plazas built to satisfy zoning ordinances, but the cards were stacked against him.  If the city fabric grew up densely around it, so that you emerged from a street into the plaza, it might work.  But the towers are pulled back, and one sees the Piazza from the outside as a disconnected object, not just as a surrounding screen from the inside.

The detailing is over-the-top Pomo, and is perhaps our best remnant of the movement spinning out of control.

The elevated highways that ring the business district have done their damage, as everywhere else. The neighborhood of Treme was decimated, and the Uptown area to the west is cut off by a no-man’s land around the freeway. 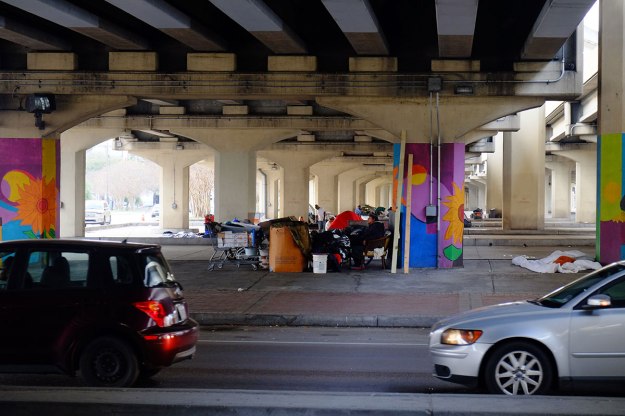 While the central business district has largely wiped out the early 19th century buildings there, some do survive,

This side of town is served by the other streetcar line, along St. Charles.  The old cars are in fabulous condition, and a miles-long ride is one of the best ways to see the city. 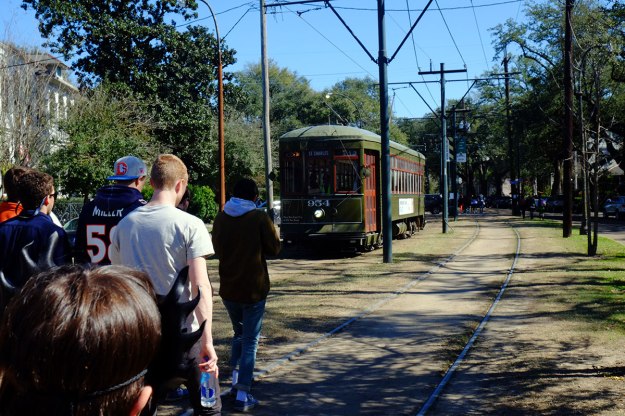 This area is remarkable.  In some ways it looks more like other American cities, in that styles that were current in the late 19th century are all visible, but they are adapted to New Orleans.  There are a lot of Greek Revival houses, their large porticos well-suited to the climate. 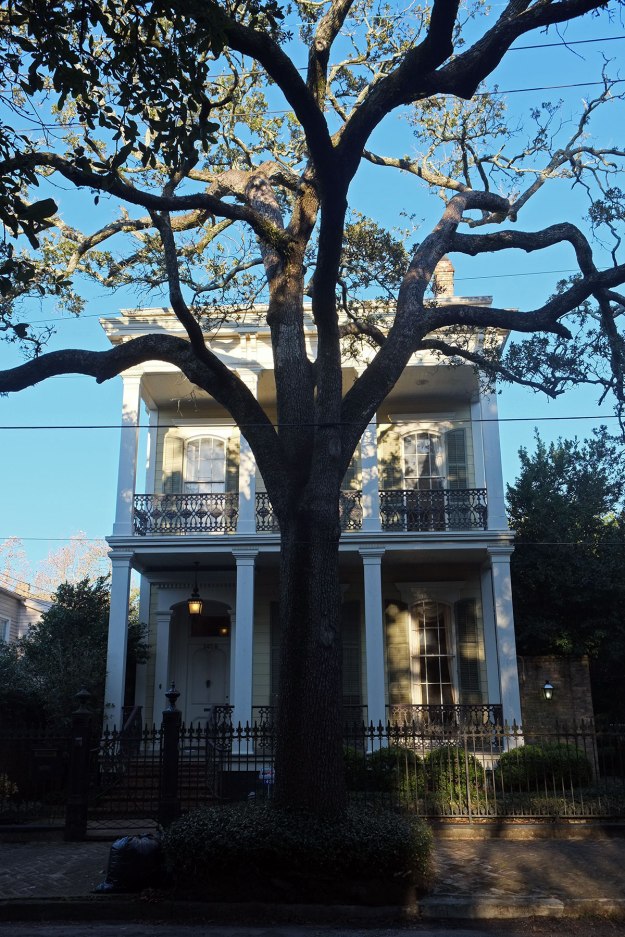 The wealth of the builders is apparent – whereas most of New Orleans’s older dense residential neighborhoods were working class in origin, in uptown there are many areas with large houses and big yards.

In general, as you move out from the city center in any direction, the density decreases, as neighborhoods begin to look more like those in other parts of the country, with detached houses sitting on lots of varying widths.  This happens in places as different as Mid-City,

in 20th century parts of Gentilly

and in the Lower Ninth Ward.

It’s a commonplace that New Orleans is unlike anywhere else in the US;  this difference is seen most clearly when you’re near the city center – the house types, the block organization, the streetscapes – these are most different in the Vieux Carre, built before it was part of the US, and in the early 19th-century districts, when the local influences were most strong, and a national building culture hadn’t yet asserted itself.  The outskirts of the city are physically much like other old metropolitan areas, with ranch houses and strip centers.  But the New Orleans difference is apparent in another important way, even out in these newer areas:  in the culture of the city and the tenor of social life.  The way people live here is unlike anywhere else, even out on the edge.  They may have a Costco, but that Costco has an excellent liquor selection.