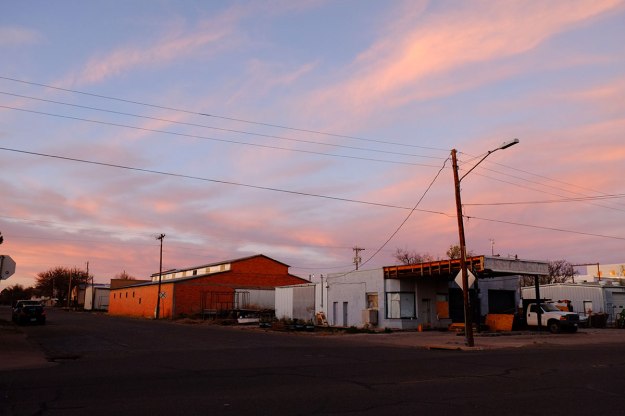 Marfa is a small West Texas town where the level of irony, postmodernism, contextual intervention, self-consciousness, and appropriation is so high that you can’t tell if it’s a real town, or the largest conceptual art installation in the world.  It was probably a straightforward, small town on the main railroad line until Donald Judd put it on the art map.  Now it has hip art-tourists coming through to see the work at the Chinati Foundation, and a permanent population of arty types, together forming a mini-Santa Fe for West Texas.  These people require services not typical for small western towns, and it was there that we found the first clues to what was really going on.

The original town is great – maybe this is why Donald Judd ended up here    The county courthouse is grander than some state capitols (such as Oregon’s), and occupies a full-block site in the middle of the north-south axis.   Many years ago JB Jackson wrote about western courthouses as the center of small-city civic life, but this trip was my first exposure to the classic ones.   (Other notable ones we’ve seen in Texas are in Lockhart and Ft. Davis). 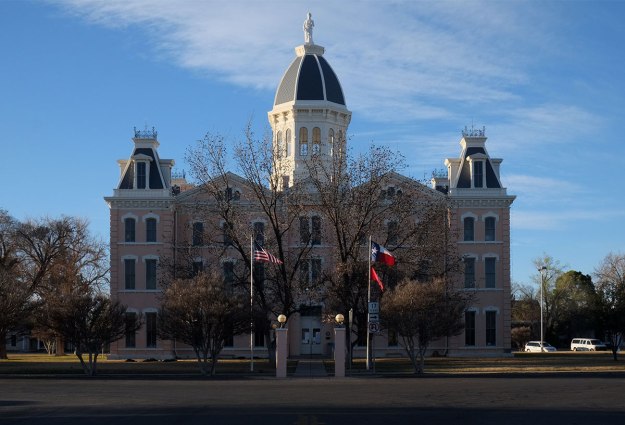 Marfa began as a watering station on the railroad, and as it grew, many buildings were built right on the line. 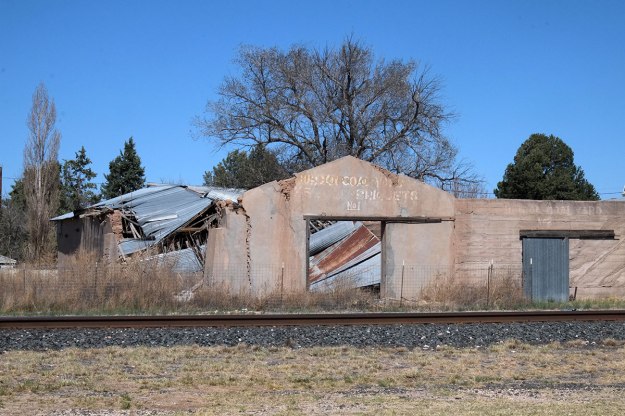 The main commercial street runs south from the courthouse to intersect the RR and US 90, the main highway to San Antonio (400 miles away).  It has classic early-20th century commercial buildings, and remarkably few later additions 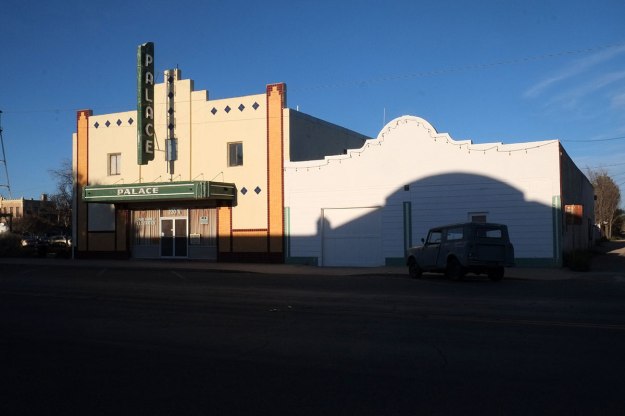 At the Judd Foundation compound, our excellent guide had pointed to one sculpture – identical metal boxes aligned vertically, with the exact same amount of space between them.  He mentioned that this was the iconic Judd piece, variations of which are seen in museums around the world.  I had wondered why that piece resonated so far, and where Judd had come up with the idea.  Then we left the compound and turned left on to the main street:

We began to notice what was missing in Marfa – mainly, the very recent roadside commercial stuff that seems to have squeezed out everything older everywhere else in the South.  There is a Dairy Queen in Marfa, but no other chains.  Perhaps two old gas stations.  No modern motel chains.  It felt like a time warp – we’ve been traveling along Route 66 in the Southwest often recently, and every town through which it passes makes a big deal out of the older, retro, roadside remains.  But in all of those towns, the hip retro stuff is wedged between the usual bad new stuff.  Marfa has been magically protected.  The intersection between the old and the quirky reigns, as in this LED-enhanced grotto at the Catholic church, right on Highway 90. 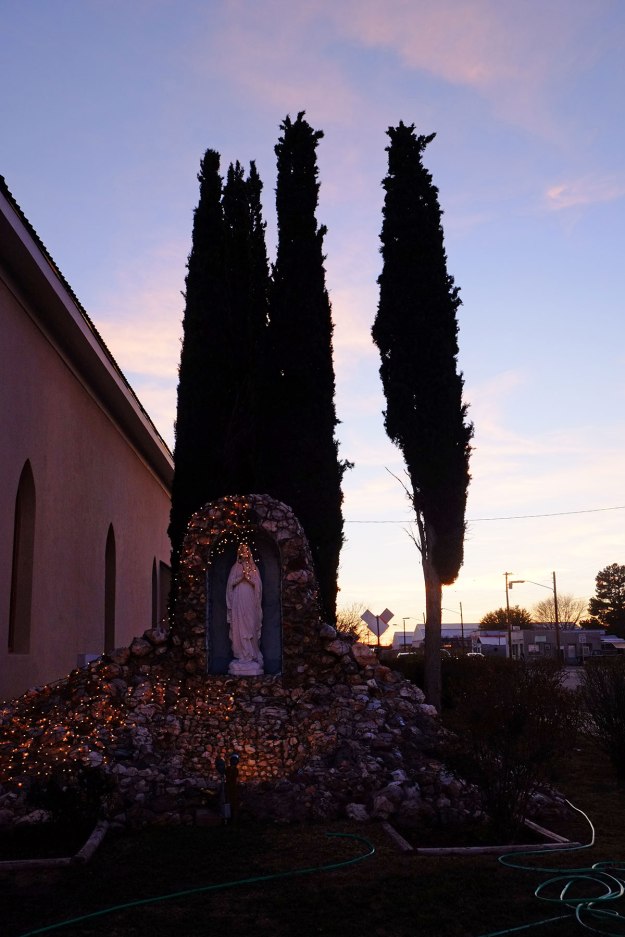 As we looked for a campground, we found two listed in town.  There is El Cosmico, which felt a little self-consciously retro – you can rent an old trailer from them, or a teepee, and there are hip cultural events taking place there.  But strangely, no accommodations for you bringing your own little trailer.  So we went to the Tumble In, out on the highway, where the campground self-register office is in a small trailer, and the common space and bathrooms are in the de rigeur hip/retro/industrial vernacular.

The Scamp fit in amongst the Airstreams and vintage 60s trailers, which seemed to be all occupied by Buddy Holly lookalikes with mangy dogs. 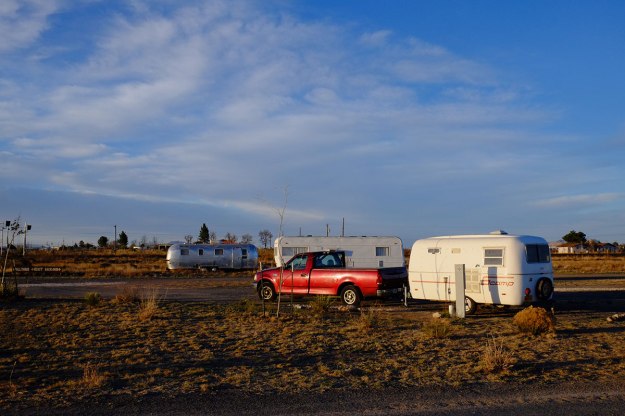 Outside of Marfa proper, there are two notable attractions. The first is the Marfa Lights, a phenomenon supposedly visible from Highway 90 ten miles east of town.  For decades, people have reported seeing strange moving lights in the desert to the southwest.  The town even acquired funds to build a combination viewing platform / bathroom building out there to accommodate the believers.  We read a bunch of articles online about it, and Greta found the ones that debunked the stories – claiming that they were simply perceptions of highway lights on Route 67 winding through slight hills – to be most convincing.  Given the choice between sitting out in the desert night waiting for a possible hokey paranormal experience, and sitting in the trailer, getting online for the first time after about a week in the wifi-free zone of the Chihuahuan Desert, Greta opted for the internet.

The other attraction in the desert is the Marfa Prada store, 35 miles to the west.  A small building filled with Prada products has been built on a lonely stretch of highway 90, where it is an illuminated icon of First World consumerism to the immigrants crossing the Chihuahuan Desert.  The punchline is that the store cannot be entered – one can only look through the store window.  We’d seen the images, and a friend had recently reported that it was full of flies that had found a way in.  We had experienced enough irony for one day, so we decided to forego that attraction too.

The lack of the normal sprawlscape means that other options for meals had to be be sought.  I had expected that with the influx of arty tourists, Marfa would be well-supplied with hip dining venues.  Greta jumped on Yelp and found a bunch of quirky, highly-rated restaurants and carts, so we headed out.  The Lost Horse turned out to be closed (and riddled with bullet holes).

Carmen’s Cafe appeared to be defunct. 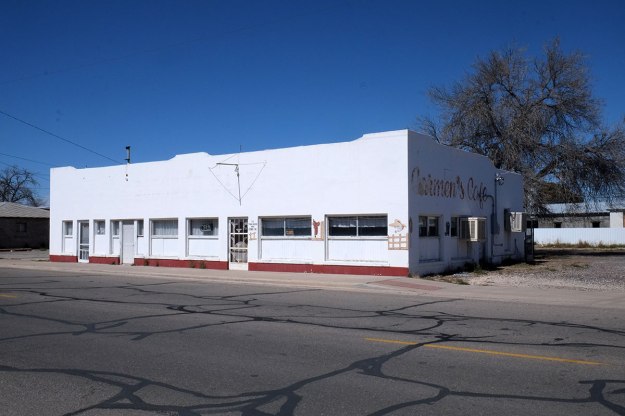 Food Shark, highly-recommended, was closed too.

As was the Museum of Electronic Wonders & Late Night Grilled Cheese next door. 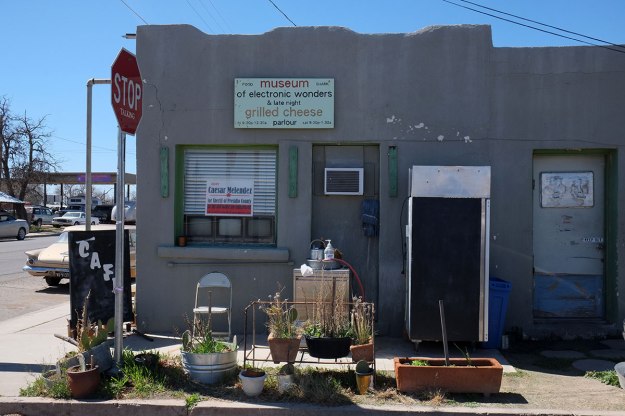 Padre’s had a sign proclaiming it would open at 5:00, but they lied. 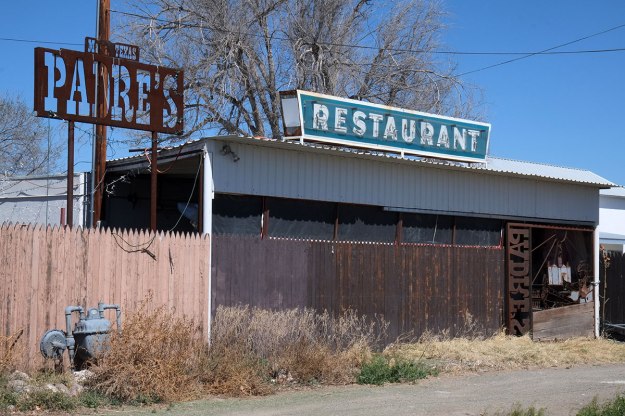 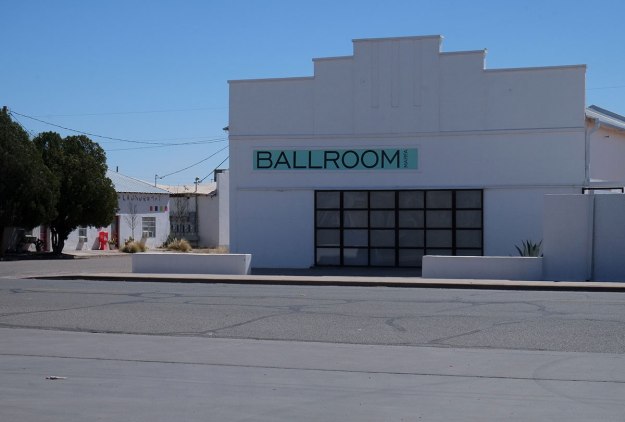 Boyz 2 Men, which is supposedly noted for the banter of its employees, was calm.

Finally we went looking for Cochineal, which the reviews said was overpriced and not as good as they seemed to think it was.  We wandered down the street, but couldn’t find it where it was supposed to be.  We encountered an artsy type from LA, who said he had reservations to meet a friend there, but he couldn’t find it either  He called them, and confirmed that their address was 107 West San Antonio Street.  We all walked along the block, past 103, to 131, then carefully looked along the property line between them. Nothing.  We broadened our search, and finally found number 107 further down the block, next to number 149.  We started to think Marfa was in the Twilight Zone, a town which appears normal at first glance, but where nothing is quite right.

We ended up at Capri, a hip new restaurant serving elf food.  Though they had a very limited menu, the pleasant young waitress couldn’t explain a single thing on it, and would giggle nervously and apologize before scurrying off to find someone who could answer.  We suspected that she was not really a waitress, had never done this before in her life, and that again, the whole set-up was a performance piece. 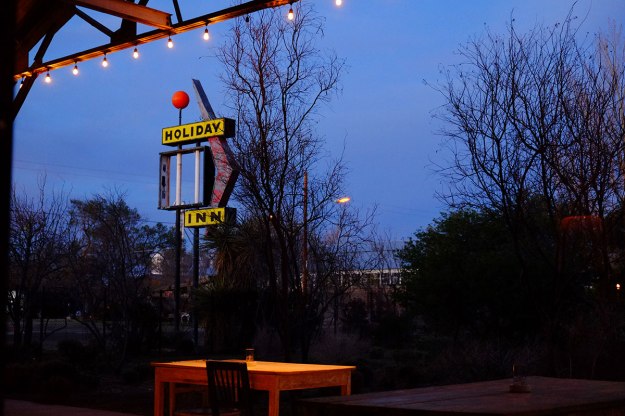 The next day was a repeat.  Our guide at the foundation told us that she had driven by Marfa Burrito, the proprietor was there, and it was certainly open.  We arrived to find that it was not.

However, when we saw people walking around behind the building, we followed them, and found this food cart.  We hurried over and scanned the menu.  But after re-reading the lists of ingredients several times, I had to ask them what the noun was:  there were many ingredients, but what form did they take all together, perhaps a burrito?  The woman in the trailer answered that they served nutrient-dense food.  I persisted, and she handed out a sample, which was a tiny cup with a thick, green liquid in it, announcing it as a nut-kale smoothie.  I gave it to Greta, who gamely sipped it, and managed to politely suppress her honest reaction. 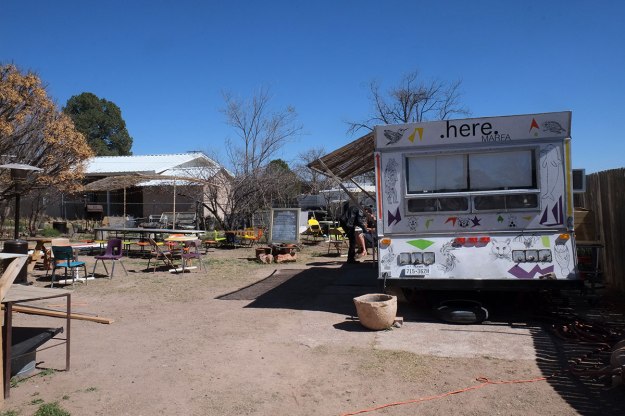 As we took our leave, we realized that the Prada store supplied the primary metaphor for all of Marfa – it is all about desire and frustration.  We began to wonder whether any of these establishments were real.  Greta had me listening to her favorite podcast, Welcome to Nightvale, about a town in the desert where strange occurrences are common.  It all started to feel familiar.  We finally found an open taco cart, Salsa Puedes, which had good food, and where I had a conversation with a cowboy while we waited.  Maybe we were imagining things.

But the pattern repeated the next day.  As we drove by, we saw that Food Shark was open, and we had a fabulous meal.   But I spotted their salt and pepper shakers, and knew that they were on to us;  this couldn’t be a coincidence. 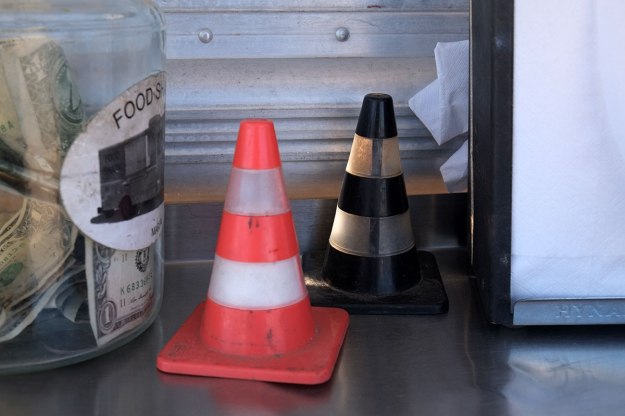 As we were eating, we realized the pattern:  at any mealtime, there was exactly one establishment open in Marfa – a different one every time.  Maybe there was only one person in town who could cook, and she randomly picked a different place every day.  It was a town where people just drove around until they spotted the place that was open.

Other weird patterns emerged.  A concentration of very old American cars.  Types that I barely remembered and Greta had never seen.  Some in suspiciously good condition. 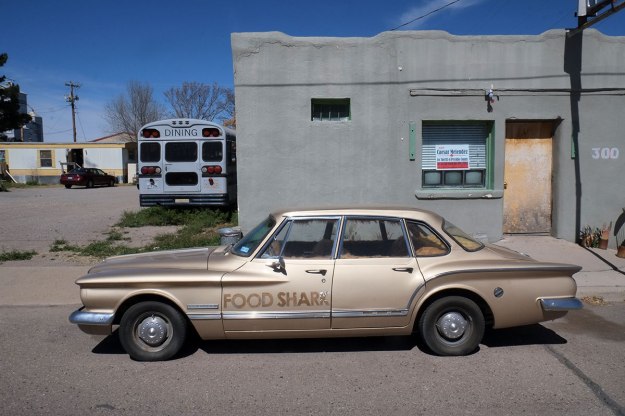 We noticed older buildings sprouting strange new additions.  What was really going on behind those grimy facades that could cause such bizarre new growth? 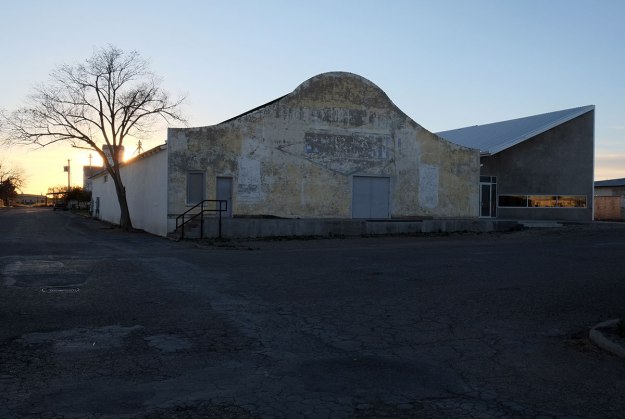 We began to look suspiciously at buildings that had appeared innocuous to us the day before – what activities were they hiding inside? 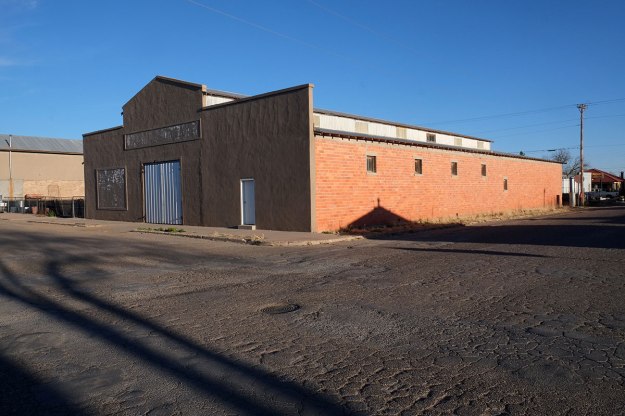 Then we came upon the local hardware store and looked in the window to find this disturbing tableaux.

All became clear.  This couldn’t be a display of goods for sale, this could be nothing other than an MFA thesis installation.  We really were unwitting participants in a performance piece at the scale of a town.

We headed north across the desert, away from the Lights, trying to reach New Mexico before dark.