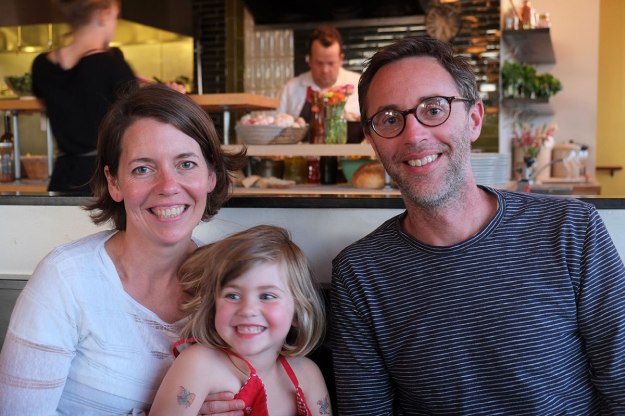 Albert Narath showed up at the end of our hallway about six years ago. Linda and I had offices on a hard-to-find, dead-end corridor in the upper reaches of Lawrence Hall, and one September we returned to find Albert ensconced in the one other nearby office. Actually, he was more tentatively perched than ensconced, in the midst of the standard new faculty experience at the UO, having been assigned an office only to discover that it didn’t come with any really useful furniture. We passed him some extra chairs, and alerted him to where on campus were the best scrounging spots for furniture. Albert took all of this with good humor, which is the essential quality for a new faculty member being able to survive at the UO.

Albert was the new architectural historian in our school, having gone to grad school at Columbia after growing up in Albuquerque and college at Bowdoin, a trajectory that seemed to reflect a desire for maximum geographical diversity as much as academic focus. He was notably funny and interesting, and was such an engaging neighbor that I eventually had to make myself deliberately walk past his office sometimes without stopping in to chat; he was too polite to throw me out, and I knew that if I kept distracting him he would never get enough work done to get tenure.

Soon thereafter we met Jolie Kerns, who had come from New York with Albert. Jolie had grown up in Sacramento, gone to Berkeley, worked in the building industry, and then gone to architecture school at Columbia, where she and Albert met. She had stayed in New York, working for some very notable small firms, such as those run by Bernard Tschumi (the dean at Columbia), and Toshiko Mori (the department chair at Harvard). Jolie was interested in establishing her own design practice in Eugene, and Linda and I had the moral dilemma of deciding whether we should try to save her a lot of grief by explaining the circumstances in Eugene which made this highly unlikely (and perhaps souring her on the place soon after her arrival), or letting her learn this on her own. (I think we gave her a few hints and answered direct questions, but really pursued the latter strategy.)

Both Albert and Jolie settled in to the school perfectly. Albert was an enormously engaging teacher, as could be seen by the constant lines of students sitting in the hall outside his office, waiting for a chance to talk to him. He taught courses in modern architecture and design, but began to inflect his work towards his new milieu. The architecture department at the UO has been at the forefront of environmentally-sensitive and energy-efficient design for decades, pushing sustainable design long before anyone started using that word. Albert dove into the history of this movement, and initiated a very popular course on it. (Albert informed me of what was known around the country as the “Oregon conspiracy”, the fact that almost everyone who teaches in this area elsewhere has a strong connection to the UO architecture department). Our students loved his classes, and I found them constantly referring to ideas they had gleaned from them.

Jolie began teaching studios as an adjunct in our department, which often brought her background and approach as an architect into the very different landscape she now found herself in. I reviewed some of those studios, and was struck by the conceptual clarity of the work, the rigor which her students exhibited. So I was later really pleased to be able to co-teach studios with Jolie a couple of times – both second-year undergraduate and first year graduate students. Teaching is usually a solitary pursuit, which just feels wrong to those of us with professional architectural experience – a good office is usually based upon the collaboration of colleagues with a wide range of talents and approaches, seldom just upon the insights of the sole design genius. Jolie had attended Columbia twenty years after I did – a period in which the conceptual approach of the profession had changed dramatically – and consequently her background and approach to design were very different from mine. We both sort of scratched our heads at first upon seeing how the other engaged a problem, but we were both open-minded and willing to try different methods, and the studios were richer and better because of it. It’s a commonplace in academia to say how we learn from our students, and how being exposed to energetic and idealistic young people keeps us from becoming too set in our ways, but I think the influx of younger colleagues is even more important. They have processed the new approaches of their youth and have integrated them into mature viewpoints, which they are then able to demonstrate to their older colleagues as well as their students. Jolie brought all this, plus she had the innate qualities of a great design instructor – insight, empathy, adaptability, humor, and the ability to think on her feet and react immediately.

Jolie and Albert also settled into life in Eugene. Their daughter, the adorable Willa, was born. They had a tres Eugene wedding out at Mt. Pisgah. They bought a cool modern house up in the hills. We figured they were around for the long run, but it was not to be. They ran into the trailing spouse problem which is widespread in Eugene – the non-tenure-track partner is usually unable to find professional employment commensurate with her prior experience and skills, and the UO has long been notable for not doing very much to help solve this problem (unless the employee in question is a member of the central administration); our department wasn’t able to make a commitment of sustained employment to Jolie. There was also the allure of life back in California, which had become more central after Willa’s birth, with Jolie’s family (and Willa’s young cousins) in the Bay Area. So Albert looked around for new positions, and was hired at UC Santa Cruz.

Greta and I spent a couple of entertaining days with them – Albert and Willa showed us the hip new commercial developments (especially the gourmet hot dog cart), and all of us toured around the UCSC campus together. Jolie is now working as a campus architect, in charge of building projects on the campus. Her most significant new project is the renovation of Kresge College, the very important residential complex designed by Charles Moore (more on this later). 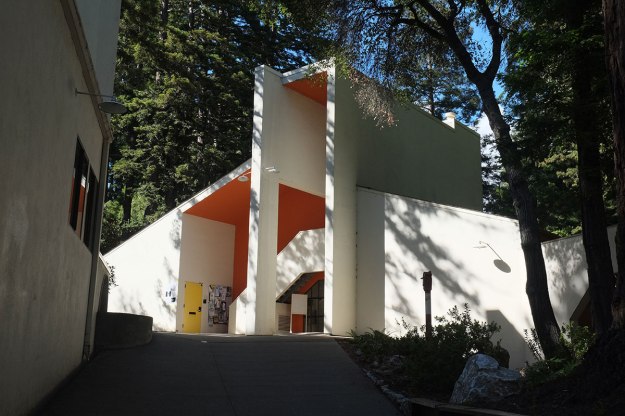 Willa was a very different child than the one we knew (being 100% older than when she left Eugene) – still adorable, but with the self-possession of a happy four-year-old. (As we wandered around the campus, Greta pondered what would obviously be Willa’s familiar fate: being dragged around the world behind her parents, looking at architecture.) Albert and Jolie were just the same, and we immediately fell back into talking at great length. We were happy to see them so well, and how well life is working out for them in California, but we really wish they were still living in Eugene.