In my experience at least, Carmel Valley is prettier, less pretentious, and has better food than Carmel-by-the-Sea, although that macaroon we got after walking on the beach was delicious.  Despite its name, there is much more than wine to be enjoyed at Corkscrew.  A waiter greeted us while we were still admiring the brick pizza oven and the tantalizing aromas drifting out of it.  The best way to keep a customer, they seem to have found out, is to make your restaurant smell too good for them to even consider leaving.  Our table was by a bay window, from which we had views of both the green valley and the pizza oven door, which, for someone who likes being able to track their pizza like an impatient shopper will track an Amazon delivery, was a definite plus.

Pizza wasn’t the only thing on the menu, but for a teenager, there is really no other option.  And with ingredients like sausage, carmelized onions, and arugula, how could I resist?  The crust was crisp, and the meat flavorful, everything you want in a pizza.

Two things I have learned to love on this trip: duck, and having a dad who lets me sample/devour some of his duck.  Smeared with a citrus glaze, which I’m finding is a common and good way to prepare it, it was deliciously moist and succulent.

Despite being raised in Canada instead of Penn Cove, the mussels were fabulous. They were much larger than I was used to, but for their size they lost none of their flavor. Steamed and served in a simple broth with butter and garlic, much like we make them at home, they were delicious, and suffered little from being maybe not quite as fresh. 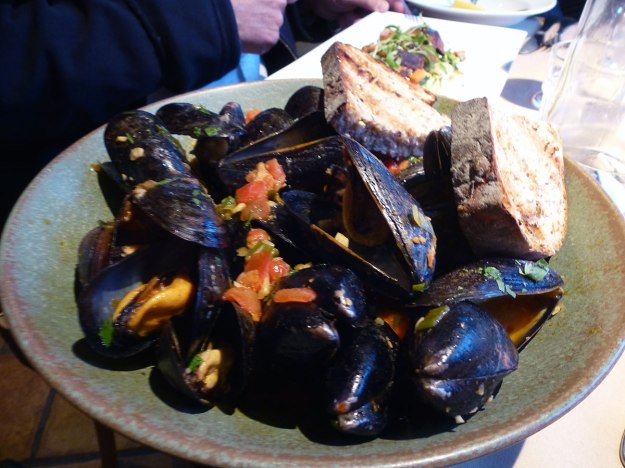 Our dessert experience was in no way undermined by already having had a slice of cafeteria chocolate cake at the aquarium for lunch.  I tried coffee ice cream for the first time in a few years, and actually liked it.  But the killer was this little tiny chocolate cake, smothered by more chocolate.  It somehow managed to be both rich and light and fluffy.

So if you’re in Carmel, don’t miss a drive down the valley.  And if you happen to be there around dinner time, well, now you know a good place to go.