We haven’t been following a military history agenda on this trip, but when an intact installation  appears, we check it out.   We came across two forts in Florida and Texas, which were built for very different circumstances, but which had an interesting connection. 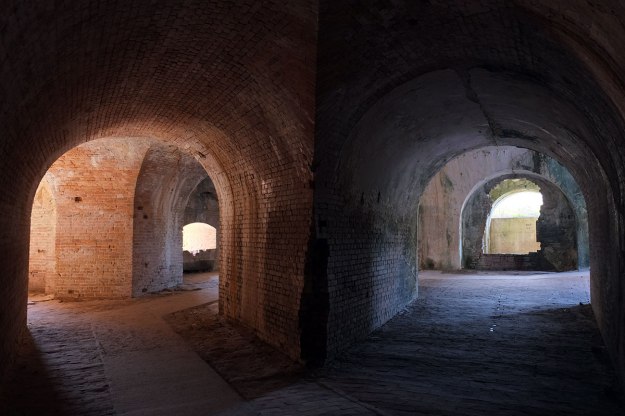 Ft. Pickens was the largest fort built to defend Pensacola Bay.  It is located at the tip of Santa Rosa Island, and is now part of the Gulf Island National Seashore.  Built largely with slave labor, it was finished in 1834.  It is of the  type known as a Third System Fortification, unified forts with extensive earthworks to resist naval bombardment, and containing large guns to shell ships that attempted to enter the bay. 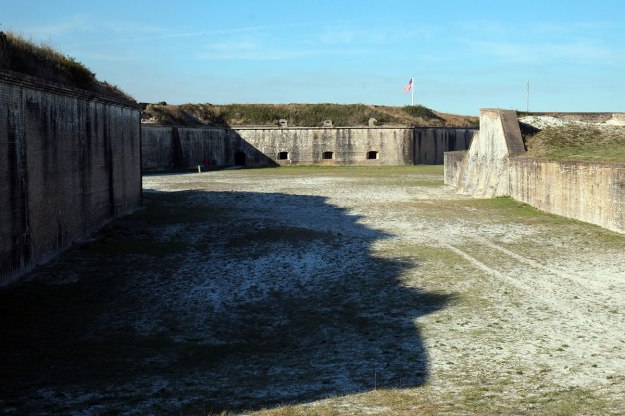 It was never involved in a battle until the Civil War, when the Union troops defended it from a Confederate attack, and then held it for the whole war, effectively eliminating Pensacola as a useful Confederate naval base.  The most interesting parts to see are the brick vaults that housed the guns, munitions and personnel, underneath the earthworks. 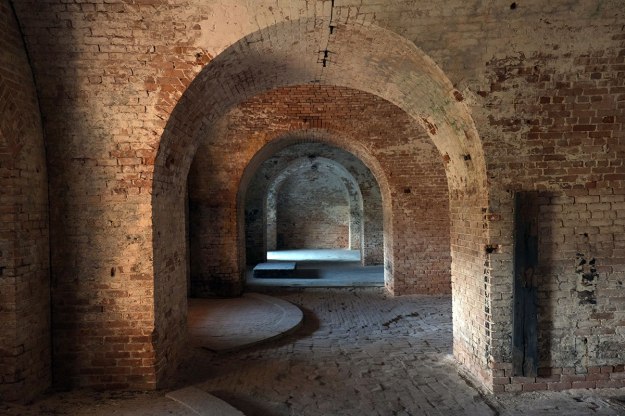 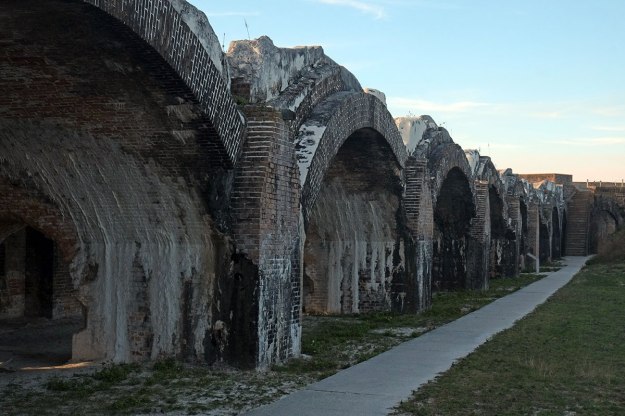 The masonry is fantastic, definitely looking at Roman architecture (and anticipating Lou Kahn).

We’ve discovered that Greta likes tight little caves and tunnels such  as these, which are under the outer ramparts.  During a battle these could be filled with explosives, so if the fort were being overrun, the tunnels could be blown up under the enemy troops.

Around the Spanish American War, a new battery of concrete and steel was built within the older fort, to house the enormous new guns of the era.  Very similar to Ft. Casey on Whidbey Island.

The Gulf barrier islands have beautiful beaches, with the softest, whitest sand we’ve seen anywhere.  But as you look across the beach, something catches your eye.

It’s part of the third phase of armaments installed here, in the 20th century.  Since the guns had come so enormous and had a range of up to 25 miles, it made no sense to try to shield them in a central location.  So instead they were dispersed into hidden bunkers scattered around the island.

The barrier islands have afforded protection not only to naval operations and the harbor, but obviously also to the whole coastline and its ecosystem.  As you look at them (Pensacola Beach in this photo) in this era of climate change, it seems likely that they won’t be fulfilling this role for much longer.  That has been one of the themes of this trip – a Climate Change Farewell Tour of sorts – much of what we’re seeing will be radically changed during Greta’s lifetime, so I thought she should see it before.

In West Texas we visited Fort Davis (in Jeff Davis County, within the Davis Mountains), built in 1854 and named after the then-Secretary of War, later President of the Confederacy.  (No discussion about renaming any of these that we heard.)  Its function was to protect traffic along the El Paso road and the Chihuahua Trail, and it was also involved in the wars with the Comanche and Apache tribes.  It must have been a pretty desolate, end-of-world posting.

Many of the buildings have been preserved and are being restored, such as this barracks.  After the Civil War, this fort was largely manned by Buffalo Soldiers, regiments solely of African-Americans, including Lieutenant Henry Ossian Flipper, the first African- American graduate of West Point. 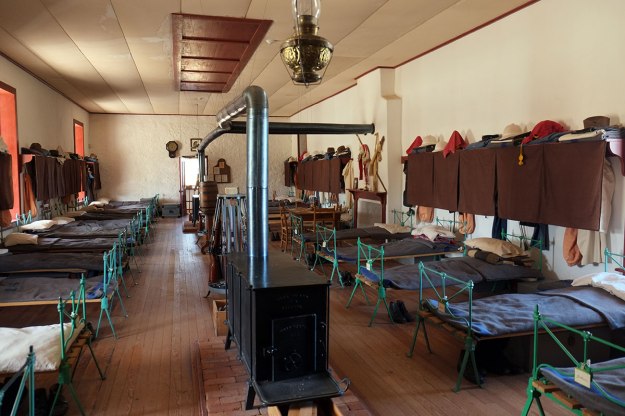 The officers had quarters for their families, beautifully built out of local stone, including the commander’s residence:

While we might be inclined towards residences that echoed the stark simplicity and elemental qualities of the environment, the inhabitants favored interiors that mimicked the current styles of the east as closely as possible.

West Texas is a vivid place, with a scale and and emptiness that is beautiful but forbidding.   There is a strict geometric order to this fort, which stands in stark contrast to the huge space of the landscape, a contrast which is still striking when seen today, as not that much has grown up around it.  While the ordering of the place might have had specific military or organizational reasons, the ability of this geometry to represent the projection of American power into the natives’ land is palpable. 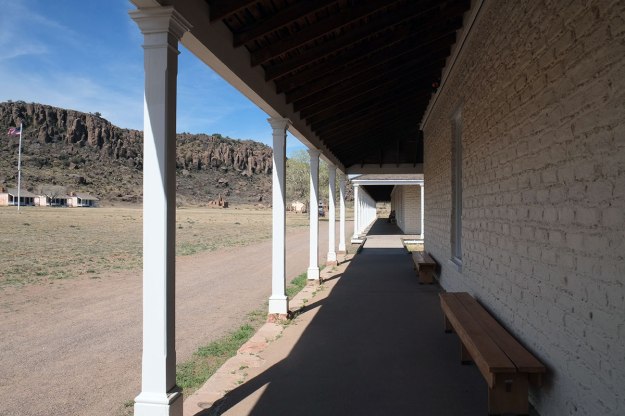 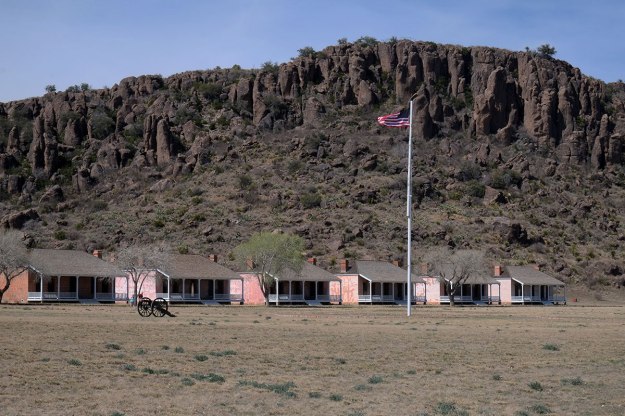 As we went through the museum at the fort, we came across a photo we’d seen before.  It was of a band of Apaches who had been captured in this area.  We recognized Geronimo sitting near the front and remembered where we had seen it:  at Fort Pickens.  This band was then transported east away from their land, and were imprisoned for several years at Fort Pickens.