I am a pessimist in all areas except for food. The human ability to make things taste good never ceases to amaze me, and never have I been more astonished than by Bao and Noodle.

We started off with an order of bao, dumplings, and scallion pancakes, and were immediately blown away. My only previous experience of bao was hearing it mentioned in a Firefly episode, and so, was very impressed. The only problem was that having my first experience be so good, is now I’m always going to be disappointed by other restaurants. The pork and cabbage dumplings were the night’s specialty, and they certainly were special. The best thing about them was the broth they came in, soft as milk, but rich with the flavor of country ham, and greens as delicate as rice paper floating like tea leaves on its surface. The scallion pancakes were cooked slightly unevenly, one edge darker than the other, and I think this was on purpose. It offered you a choice between crunchy or more chewy.

If the appetizers blew us away, the main course kicked the wind up to hurricane status. Starting on the left, we have Dan Dan noodles. Unlike many restaurants, they leave the dish without a lot of heat and provide you with a jar of Sichuan pepper hot sauce. Simply the smell wafting out of that jar was spectacular, but enough to make your nostrils burn. Being someone who can’t take a lot of heat, I appreciated the consideration. The chili sesame paste, which was actually more sauce-like in consistency, already slathered on the noodles was fantastic, nearly as good as the noodles themselves.

The noodles were one of the most impressive things at the appropriately named Bao & Noodle. Each of the four dishes we ordered had a different type of noodle, perfectly suited to the meat. The Cumin braised lamb was so tender that it literally fell apart in your mouth, so the more chewy Biang Biang noodles were the obvious match. Instead of being cut, the noodles were hand-ripped, which definitely showed in the texture around the edges.

Egg noodle with XO sauce, on the right, was distinctly shrimpy, and by that I mean it tasted like seafood. The flavor had penetrated the noodles, which were long and thin, so that I could taste the quality without even eating the crustaceans.

But the beef soup was the best. I promise you that I’m not biased because it’s the dish I ordered. It took the best qualities from everything else. Its rice noodles were similar to the bao shell, with the insides being soft at first bite when they were dry, but becoming chewier in your mouth. Like the lamb, the beef came apart with each bite, and used tougher noodles to compensate. It shared the soft greens with the dumplings, as well as the rich broth. This broth though was several levels of magnitude greater. If the soup had just been broth I would have been happy. I couldn’t help from finishing it, even though I knew that would leave less room for dessert.

Normally, ordering dessert at a Chinese restaurant is a bad idea. It’s always just cakes made out of bean paste or something equally awful. But here they had blueberry milk bread toast, mango pudding, and snowskin mooncake.

The toast had been fried, with the milk caramelizing on the sides so there was a nice sweet crispness to it. The warm blueberry sauce on top was divine. 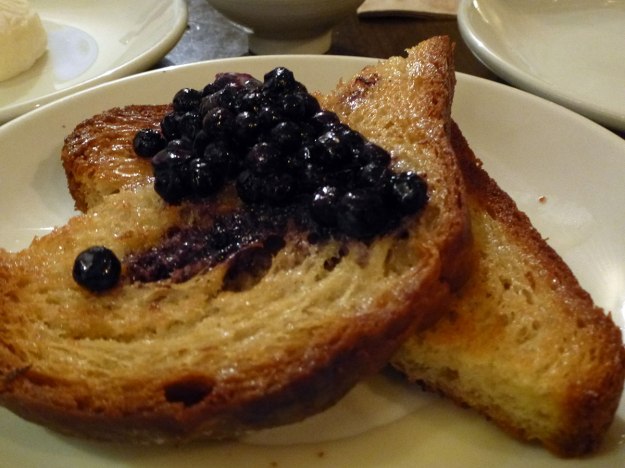 Fruit puddings are nearly always too sweet. This broke that stereotype wide open. It simply tasted like mango, but better. It reminded me of the picture in the Southern Food and Drink Museum (coming soon to a blog near you) of centrifuged peas. After running the vegetable through a blender, they put it in a culinary centrifuge and spun it for hours until they were left with an intense pea paste. This was like how I guess that would taste; intense as hell.

And for the grand finale, snowskin mooncake. I’ve described other foods as divine already, this was like eating Heaven. The rice wrapper was rather mochi like, but even softer, like a cloud. The vanilla coconut custard filling was rather chunkier than custard usually is, but tasted of all things good in this world and the next. 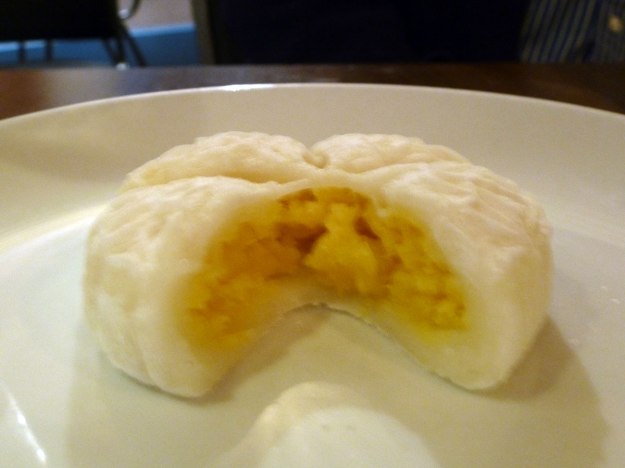 Bao and Noodle was unpretentious, and unlike many Asian restaurants, focussed on being good rather than being creative. If you are in New Orleans, come here. Come here first thing, so you can taste for yourself how good it is. After that, I promise you won’t be able, or want, to stay away.

3 thoughts on “Bao and Noodle”