California is so big and diverse – in its landscapes, populations, economy – that even on an extended trip, you only get to see a narrow slice. When it became clear that the Sierras route wasn’t going to work for us, we switched over to the coast, as the landscape provides the most amazing contrast with the desert, and after two months on our own in the Southwest, we were looking forward to seeing a large concentration of friends in the area.

For a northeasterner, who is used to the coastline being uniformly densely built-up for hundreds of miles, the California coast is remarkably unpopulated. There are the big stretches of preserved land, such as Big Sur, but even the cities and towns are amazingly small. Compared to the East Coast, the West has very few good natural harbors, and those few became the nuclei for major metropolitan areas. In between, the cities seem to have developed as the service centers for a relatively low-density rural population, and so they are pretty far apart and small. Their growth in the late 20th century was based upon tourism, retirees, universities and other institutions, so basically an affluent population who has chosen to be there. They don’t have the problems of older, larger cities, and the general level of prosperity is noticeable.

San Luis Obispo is a beautiful small city (which I pretty much didn’t photograph, as we were in the downtown area mainly at night). The downtown core is well-preserved, with a blend of old and new commercial buildings, all around three stories tall.

The streetscape is dominated by spectacular canopy of uniform, mature street trees that roof the space of the sidewalks. On a weekday evening the streets were full of people – both Cal Poly students and older folks – going to the many bars and restaurants. There are bungalow neighborhoods within walking distance, and not much noticeable sprawl in any direction, I’d assume partially because the city is hemmed in by hills and farmland. It’s a pretty nice scale for a city – big enough to have urban amenities and atmosphere, but small enough that you can escape out to the coast or countryside quickly.  SLO is about 1/3 the size of Eugene, but it feels a lot more urbane.

Monterey has different roots, as a fishing port and concentration of canneries. As that industry has died off, it has transitioned to being a tourist center. Cannery Row has been transformed into a normal tourist district of souvenir shops and places to eat. It was good to see the repurposing of all the old buildings, but there wasn’t much activity here to interest us.

Except of course, the Monterey Bay Aquarium, which anchors one end of the tourist drag (and which Greta has already blogged, about the fish parts.)  There’s not much I can add to what has already been written about this building – designed by EHDD, it recently won a 25th anniversary award from the AIA, which are given to those buildings which were notable when they were built, but have also stood the test of time. The Baltimore Aquarium changed the whole conception of aquaria, and Monterey Bay took the type to its highest level. The emphasis on the local coastal environment (rather than showcasing species from exotic locations) contributed to a fundamental change in the model for natural history exhibits nationwide (as we saw in many other places). It also worked with the local built environment, re-using a waterfront cannery building (rather than new black-box construction as with most aquaria), and kept many pieces of the cannery infrastructure as well as the shell.

The gigantic kelp forest was a first, flushed constantly with seawater from Monterey Bay. 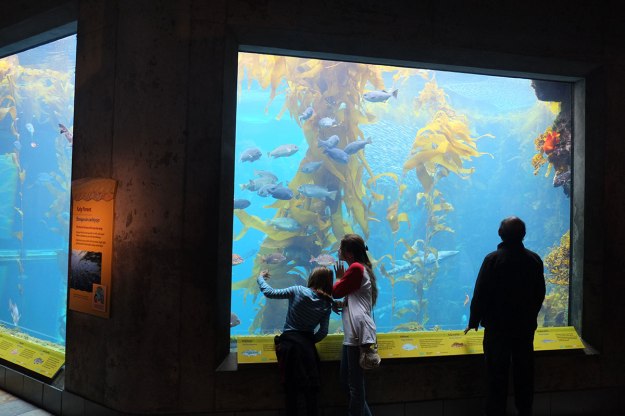 Whereas most aquarium exhibits have to be kept in relative darkness, the circulation areas of the aquarium are flooded with light, and open out to views of the bay. The new construction within is kept minimal, simple and industrial, in keeping with the nature of the existing building.

The programs are informative and fun, such as this one at the penguin tank.

As we had known from our trip there six years earlier, the aquarium was exactly the best kind of building for us to visit on this trip – wildlife for Greta (including the adorable sea otters), and fantastic architecture for me.

We wandered into the adjoining town of Pacific Grove, another one of those interesting seaside towns which had their origins as centers for religious revival camps, (or in this case, a Chautauqua type gathering), similar to Oak Bluffs on Martha’s Vineyard. The waterfront is lined with large Queen Anne houses,

and a nice example of the Bay Area shingle style/craftsman,

which also had a very sympathetic addition.

The old pavilion on the point has been restored.

The streetscapes are full of big trees, little houses and great porches. 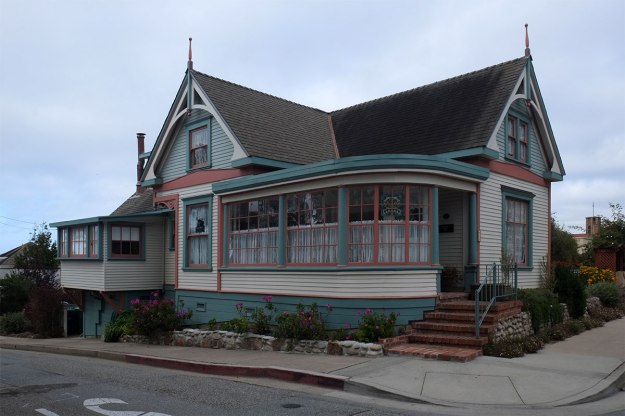 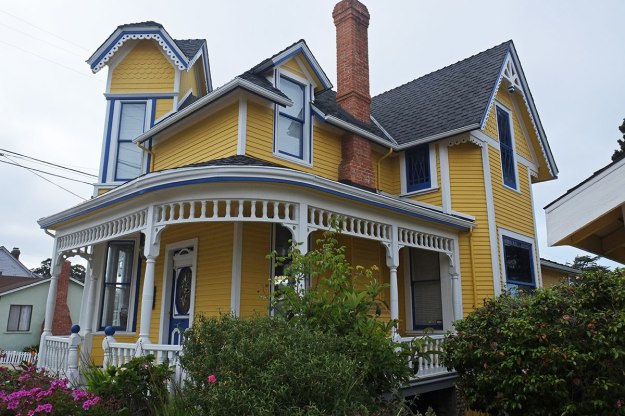 I especially liked the formality of this façade, 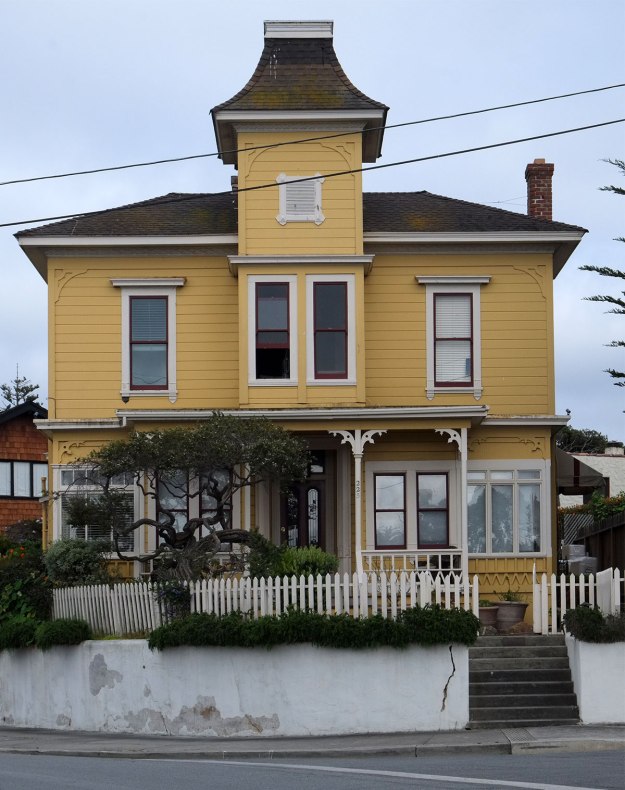 compared to the head-and-tail quality of the additions.

A very pleasant and quaint town, but it was also nice to be reminded that you are not back in the 19th century, this is very much 21st century California:

Carmel (which I guess is technically Carmel-by-the-Sea, but I just can’t bring myself to say that), looks like a stage set Norman village dropped on a seaside hill. The beach, which runs all along the bay from Pebble Beach golf course on the north to Point Lobos on the south, is breathtaking – sand, sun, surf, big rocks, and the relative shelter of the small bay. We were flabbergasted that we could just drive along Scenic Road, park our truck and go hang out on the beach – another sign that we weren’t on the East Coast anymore. 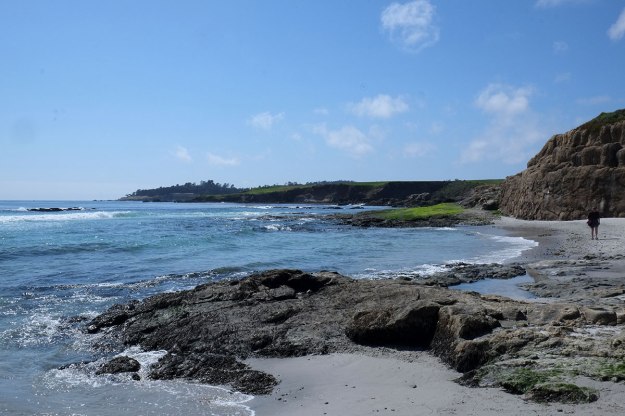 The downtown is quite a ways up the hillside from the water, and comprises a few streets of inns, restaurants and stores, which seem to be ratcheted up to an even higher economic level than Santa Fe. The overall affect of the town is that of an overgrown, Old World village, with a casual quality which belies the obvious wealth floating around. 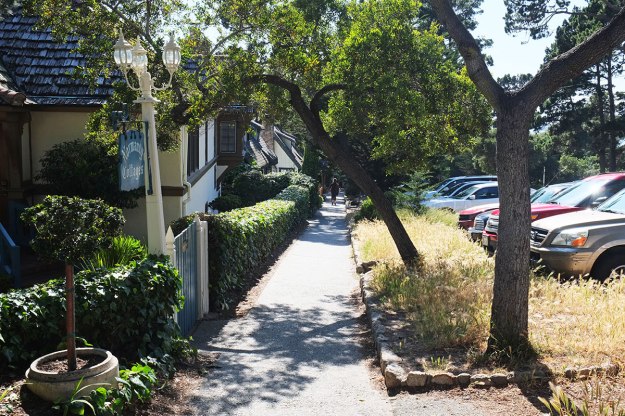 The buildings are handsome and competent,

but they are achingly, self-consciously picturesque. I am usually pretty okay with places which have strict design guidelines which seek to maintain the historical continuity of the local vernacular (such as Santa Fe), but when the local vernacular seems to be a complete fabrication, it gets on my nerves. We certainly got used to this in the late 20th century, with all of our gated and covenanted “communities” in anachronistic styles, but Carmel seems to have been a pioneer in this movement.

Away from the center of town, many of the houses are in what can only be described as Hansel and Gretel Style. It is life in a Thomas Kincaid painting, and I just wanted to see something seriously transgressive, like a Frank Gehry building, or more extreme. 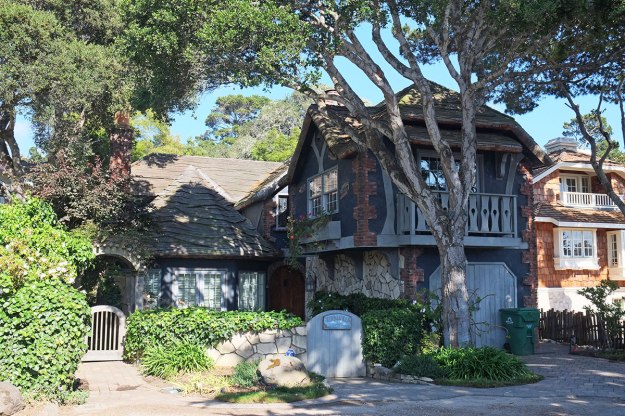 Most of the houses in Carmel are relatively modest, but then there are the houses that remind you of just how much wealth is really here. This house, which looks like a whole village by itself, is on the beach, right next to the Pebble Beach golf club. We wondered who might live there, and finally decided that it must be someone with so much money that we’d probably recognize their name.

In this town of not especially creative anachronisms, the architectural highlight was this Frank Lloyd Wright house, right on the water. 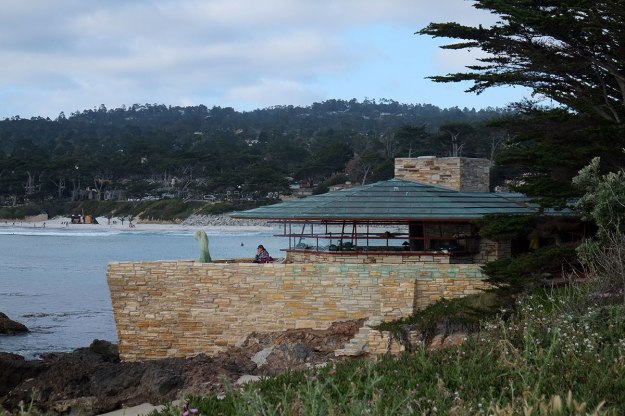 Beyond the general weirdness of the architecture, what struck us as strange about Carmel was the how it didn’t seem very walkable, even for such a small town. The residential streets don’t have sidewalks, probably trying to maintain that small-village atmosphere. All the commercial services are concentrated in the middle of town, the hillside is pretty steep, and it looks like people drive around – we didn’t see anyone out walking in the neighborhoods. We’ve visited many wealthy seaside towns on this trip, and Carmel is the first where we couldn’t figure out why you’d really want to live there. You could live in a beautiful yet chilly and foggy coastal microclimate, have a small, very expensive house, tightly packed with similar houses, but still have to drive everywhere. Greta and I preferred Carmel Valley, inland from Carmel. There is no real town, and you still have to drive everywhere, but the landscape is spectacular and the climate is warmer and drier. And it’s still a pretty short drive to the beach.

Santa Cruz is an unusual city – it isn’t that big, but for a small city, it seems to have a lot of very distinct districts, with really different characters. (I think there are also a similar number of subcultures, including the aging hippie-surfer demo). The university is obviously an important presence, but it so far out of town up in the hills that it’s hard to notice its impact on the physical environment. The downtown is not very memorable, and it doesn’t dominate, or even provide a very strong center for the city. However, here are some great older neighborhoods, each of which seems to have its own commercial core.

When we visited there six years ago, our favorite place was the seaside amusement park. 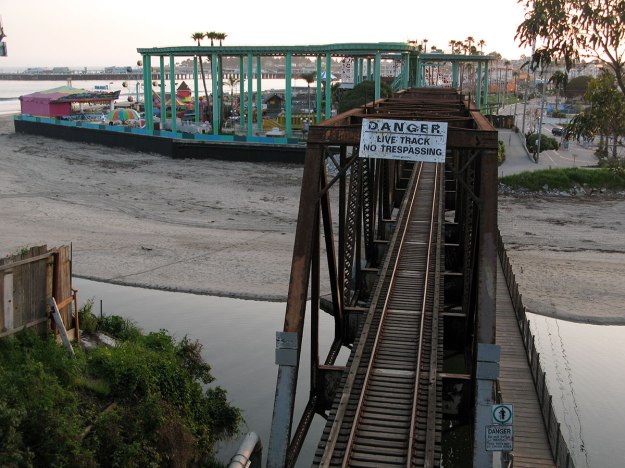 It was deserted when we walked through, and we thought we’d been dropped into a Fellini movie.

There is a big public wharf downtown, and this amazing arcade building:

I remember being confused by the city at first – it was unlike any other single place I could think of, and then I figured it out – it’s Eugene meets Asbury Park, with the hippie nostalgia of the West Coast meeting the cheesy seaside attractions more typical of the East.

On this trip we knocked around the neighborhoods some more, coming across this gem, whose history we couldn’t even guess at:

An older industrial neighborhood is the location of current hipster gentrification, with the buildings turning into shops and (some quite good) restaurants. 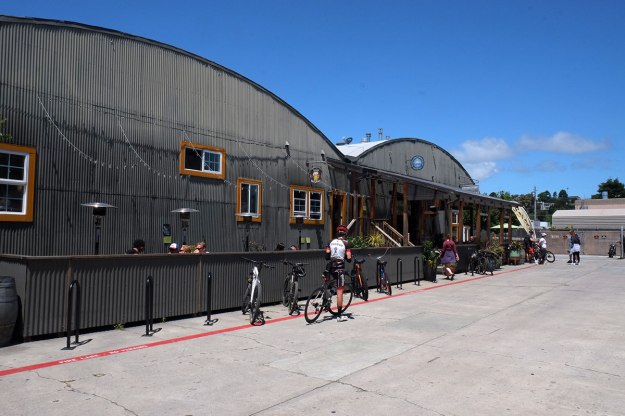 We walked all along the shore to the west, where we were staying with the Finrows. It is a fantastic promenade – people walking, biking and driving along the top of the bluff, which undulates in and out around little coves, at the bottom of which there are surfers and sunbathers (sometime practicing naked yoga). 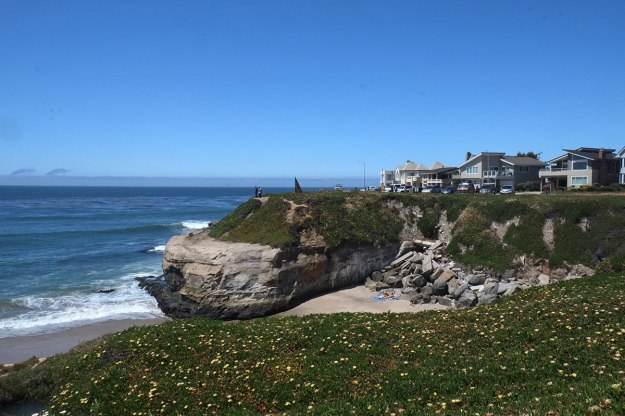 But mainly we decided to chill out. The Born boys (the Finrows’ grandsons) invited Greta to come along when they went surfing, so I hung out on the beach,

while Greta borrowed a wetsuit for some boogie-boarding.

Travelling in central California was an unusual part of our trip. Whereas most of the trip had been to far-away places to which we may never return, we had been to these places before, and we’ll probably get back to them relatively soon. We didn’t feel the need to be completely thorough, trying to see everything on the checklist for every place. And compared to many more challenging places we’d visited, these cities encouraged such sloth – they were completely relaxing and comfortable. You get pulled into that inimitable California lifestyle, strolling around and enjoying the weather, in between wonderful meals. The Promised Land experience continued.