Despite never having tried or even heard of hushpuppies before this trip, I think I have come to know them quite well. They’re usually served as a side to something else (it can be anything in the South, from fried chicken to fish tacos), but I think they deserve their own post.

Wayside Takeout and Catering and Ole Virginia Fried Chicken
Charlottesville, VA
The first hushpuppies I ever tasted, and probably the worst, although I didn’t know that at the time. I thought they were good, but had to ask if they were traditionally eaten with ketchup, as they were a little bland. Also on the small side, only about an inch in diameter.

Clyde Cooper’s BBQ
Raleigh, NC
Unlike with the previous puppies, I could actually taste that they were made of cornmeal. They were also bigger, but not larger spheres. They were stangely extruded, in (I hate to say it) a form any three-year-old would immediately recognize. This made the surface to volume ratio a bit greater, which I think was good, despite the obvious flaws in the design.

Leon’s Fine Poultry and Oysters
Charleston, SC
Returned to round, but these were larger, about two inches in diameter instead of one. Definitely corny, though less so than Clyde Cooper’s. They also had peppers baked inside them, adding a dash of color and spice to an otherwise monochrome and occasionally bland food. 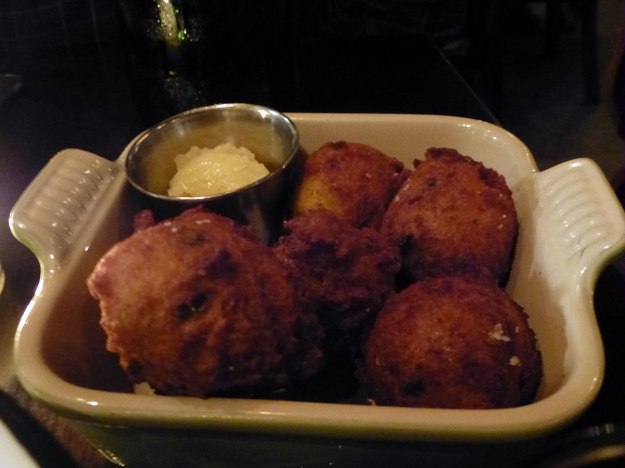 Big G’s Barbecue and Catering
Allendale, GA
These had an interesting texture. Instead of having a thin crispy shell coating a mostly mealy inside, it was a bit more permeated. The two-inch spheres seemed more like small cornmeal balls wearing an almost crystalline coat of fried fat. It was full of little air pockets, making them much flakier than any other hushpuppies I’ve tried. 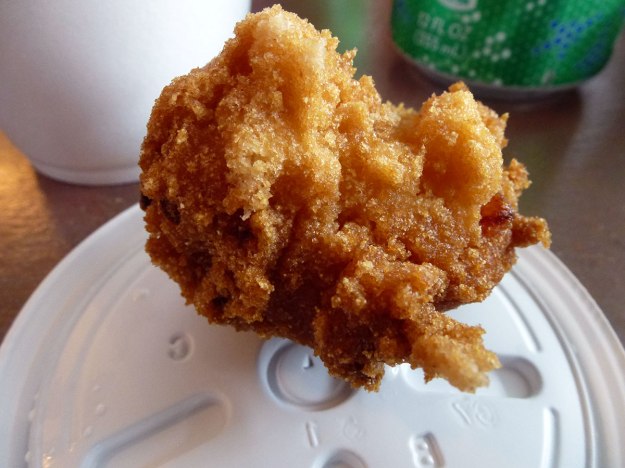 I think I’ve covered all the different variations upon hushpuppies, but if I find something new, it will definitely be added.