The urbanized corner of northeastern New Mexico (the part of New Mexico that has three actual cities) affords a pretty wide range of urban experience, given how small the cities are. Earlier in our trip, we’d gotten pretty blasé about medium-sized cities American cities – they started looking more like examples of a standard type, rather than really distinct places (JB Jackson’s essay on “The Stranger’s Path” comes to mind again). The major independent variable seemed to be the ratio of pre-war size to current size, with the cities that were bigger in the past often having a historic core that gave them some character, whereas the cities dominated by post-war growth all just looked alike. The New Mexico cities have all kept their pre-war cores, and they maintain a strong identity despite the more recent sprawl. Most interestingly, they are all really different from each other. Albuquerque is the relatively big, diverse city. Santa Fe is the boutique city of government, arts and wealthy visitors. Taos is the funkier town up in the mountains, which has its overlay of tourism and artiness, but in a less rarified way than Santa Fe. It also has the outdoor-activity jumping-off place feel to it, but at a lower level than places like Moab and Jackson. And with the Taos Pueblo just north of town, the native culture is more noticeable than in the bigger cities.

Each of these cities sits right where the high desert meets a mountain range, but in Taos the contrast is stronger and the connection to the mountains feels more immediate. Taos Mountain, at the end of the Sangre de Christo Mountains, dominates the views in the area, including the downtown. After a couple of months in the dry and usually hot Southwest, Taos felt different to us – a high-elevation city in the Rockies, near the desert, rather than a desert city from which you can see the mountains. It might have been the altitude, or the fact that it was cold and snowing, in May.

The downtown architecture is similar to that in Santa Fe, with a mixture of adobe and faux-dobe. The atmosphere is probably regulated as closely as in Santa Fe, but without the overlay of serious wealth, it doesn’t feel as precious. 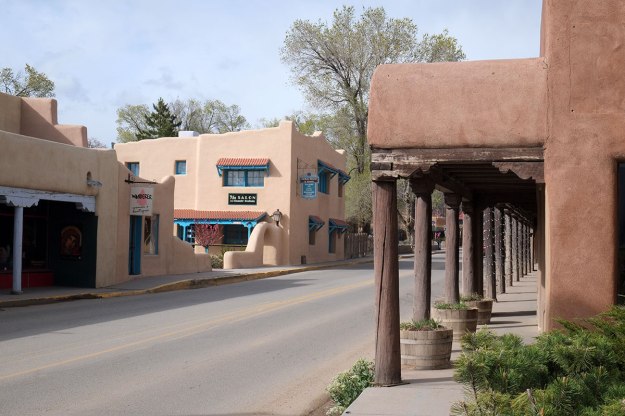 The historic plaza is surrounded by shops selling Indian crafts, outdoor equipment and a nice hotel. On a cold Sunday afternoon, it was deserted. We assume that in the summer, it and the surrounding shopping streets would be full of tourists.

Moving away from the commercial core into the residential areas, there are some beautiful places, with adobe houses set in a landscape with trees and grass, something we found really appealing at this point. 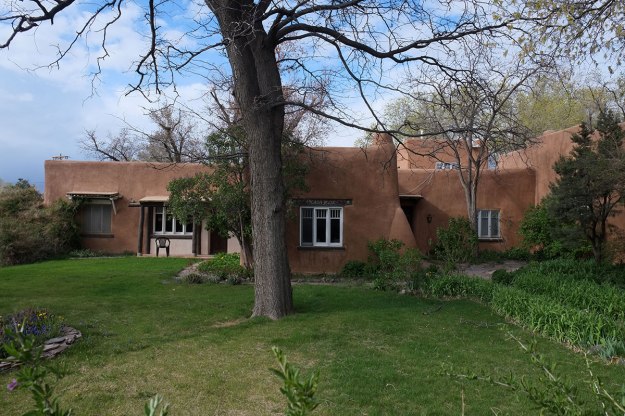 Once again the simple vocabulary of the Puebloan style allows for variety of expression within the few rules, the elevations respond to interior needs, and the casual arrangement of the whole is held together by the discipline of the style.

There were older houses where the plasticity of the material was exploited – I became very fond of lumpy, curvy architecture with little attached blobs. Making these forms out of adobe and stucco makes a lot more sense than going to the extreme lengths current high-style architecture does, with its torturing of steel frames and metal panels into curvilinear forms which are only obtainable through the application of advanced computer modeling technology, computer-controlled fabrication, and tons of money. Here, there was probably a rough sketch from the architect, and a couple of good masons. 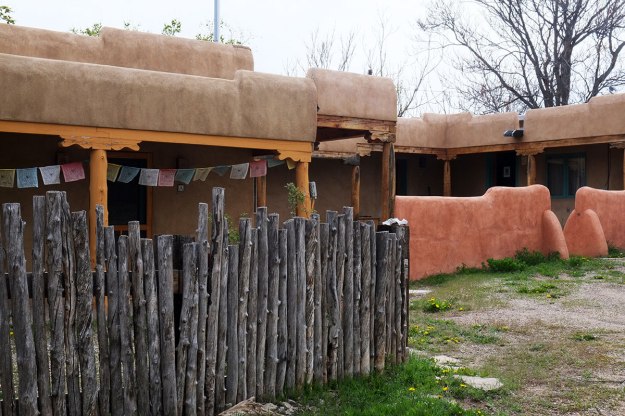 From everywhere in town, there were these intermittent views out to the landscape, such as here across a pasture to the smaller mountains to the south.

And then there were the random building agglomerations which made us feel that we were back in Eugene, but with stucco.

That feeling continued into the art world. Santa Fe had lots of outdoor art, all of which tried to seem very serious, even when it was pretentious and bad. Taos had more of the funky sculptor-puts-things-in-front-yard aspect to it, and the contrast between the sublime and the ridiculous again made us feel at home. 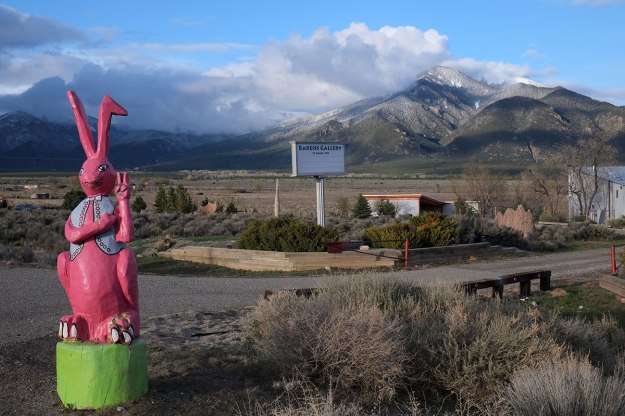 At Rancho de Taos, just south of the city proper, we saw the mission church made famous by Georgia O’Keefe. 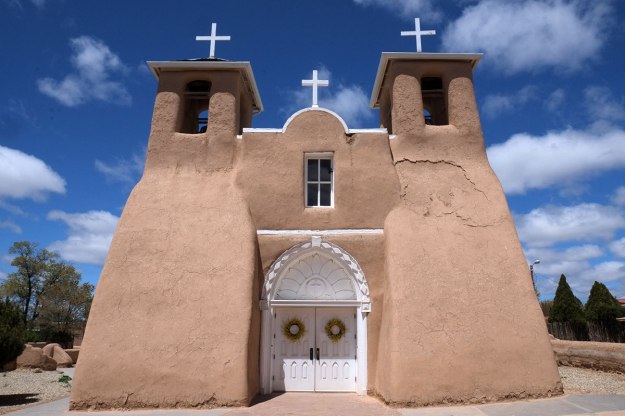 Even 100 years after this was discovered by O’Keefe and other modernists, and even after knowing what to expect from seeing their representations, the church is riveting in its stark, geometric forms. The simple shapes, the play of light and shadows over the surfaces – it’s obvious why it was a revelation and inspiration to them. The clarity present here, due to the demands of the material and the vision of the artisans who knew how to use that material, stands in contrast to the self-conscious striving for technical difficulty and obscure meaning in the current milieu. Our appreciation of this architecture may sometimes be overly naïve and romantic, but seeing this church in person reinforced how powerful simple and clear forms can be. 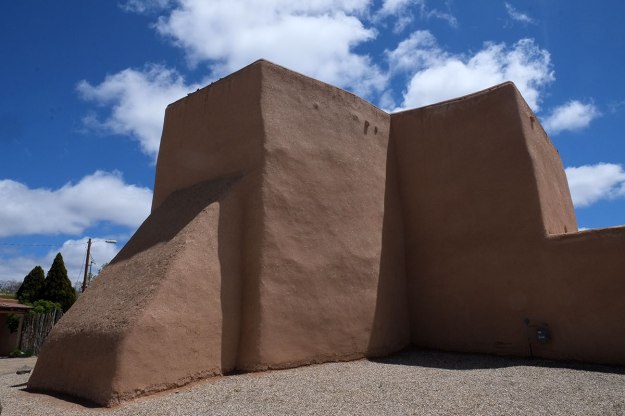 Taos is in an incredible landscape, so we spent a couple of days exploring outside the city. We took the much-recommended “high road” back south towards Santa Fe, which was a combination of broad perspectives over the high country of mountains and ranchland,

and small towns that at first glance were completely casual and untouched by the larger regional culture, but if you looked more closely you could always find a few artists’ studios mixed in. 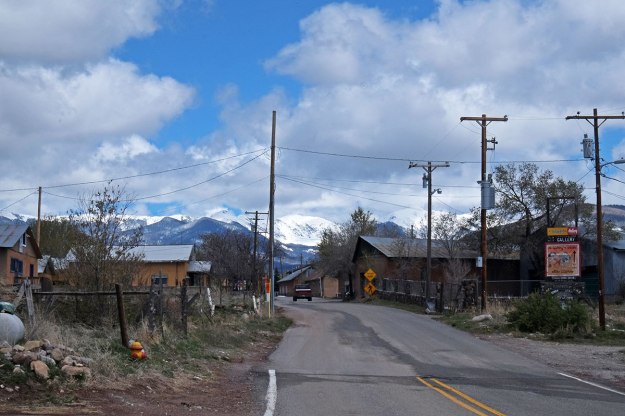 Santuario de Chimayo is an old mission church, which is reputed to have holy soil with curative powers. We read some disclaimers from the Church on how the soil doesn’t have any power beyond its ability to focus believers’ faith in God’s power to heal, and so only indirectly leads to miraculous recoveries, etc. But everywhere we looked there was lots of evidence of a strange, fantastic mysticism,

with shrines that showed the devotions of Hispanic pilgrims,

and even those originally from Viet Nam, now living in this very different world.

Greta was nonplussed by all of this. Even I, who went to Catholic school for 12 years and was quite used to little old ladies lighting devotional candles at Our Lady of Sorrows, found this strangely alien and fetishistic, having more in common with the traditional practices we’d been coming across at the pueblos than with doctrinaire Catholicism. We’d been hearing about the syncretism in Southwestern religious beliefs, but this was the evidence we’d seen that this was a living system, not just a curious bit of history. Greta is a child of the Enlightenment and lives in the secular atmosphere of one of the most irreligious states; most of what she knows about Christianity has come from watching Monty Python’s Life of Brian, and she had no idea what this was all about. Like many teenagers these days, she reads a lot of fantasy, but coming face-to-face with actual, iconic expressions of non-rational religious faith (that weren’t in a folk art museum), was completely outside of her prior experience. But we both really liked this painting of the Mission which was in the lobby; probably we’re both more comfortable with magical realism than mystical religion. 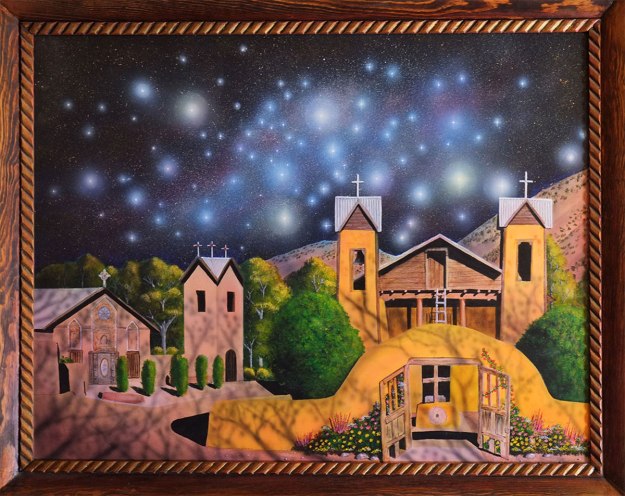 While the high road to Taos is relentlessly beautiful mountain terrain, we found the “low road” to be equally beautiful. It goes through the more densely populated corridor along the Rio Grande, and provides access to many pueblos (and casinos). When the main highway and the river diverge, we turned off onto a dirt road along the river, the lower reaches of which were peaceful and calm, with a range of good camping opportunities. 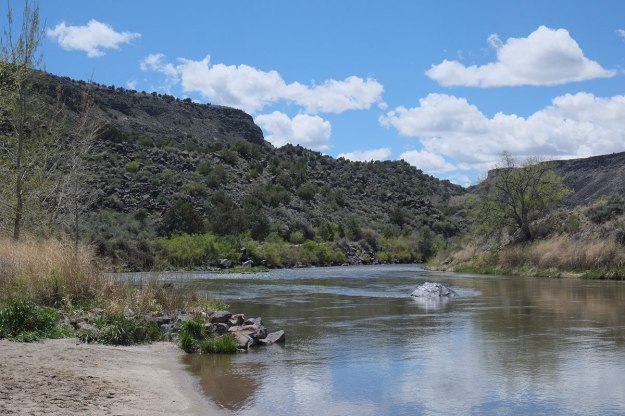 Eventually the road climbed up the western canyon wall, and we hiked into the canyon on an escarpment, leading to this view. We then realized that this was the second time we’d hiked into a deep canyon on the Rio Grande – the first was two months earlier, in Big Bend, way downstream.

The road climbs up to the desert plain above, until it reaches this bridge which spans the Rio Grande, and we then took the highway which led back into Taos.

Taos was our gateway back into high mountain country. We hadn’t seen what we westerners would call real mountains since Big Bend a couple of months before, and we hadn’t been in the Rockies since leaving Yellowstone in September. When we left we drove north and west towards Mesa Verde, and truly appreciated the landscape of mountains, conifers and snow.

We crossed a mountain pass at 10,000 feet, and went through small towns and ranchland nestled in the foothills, an amazingly different environment from the one in which we’d spent the past few months. We would soon head back through the desert on our way west, but for a few days we were back in the more familiar and comparatively lush world of precipitation, vegetation, and snow-capped mountains.