Perhaps southerners aren’t as narcissistic as other Americans, or perhaps the tourist sites  in the south don’t attract the foreign tourists who are prone to selfie-taking, but for whatever reason, we saw very few selfies in the past few months.  However, now that we are in the Southwest at major tourist sites, the rate is picking up again: 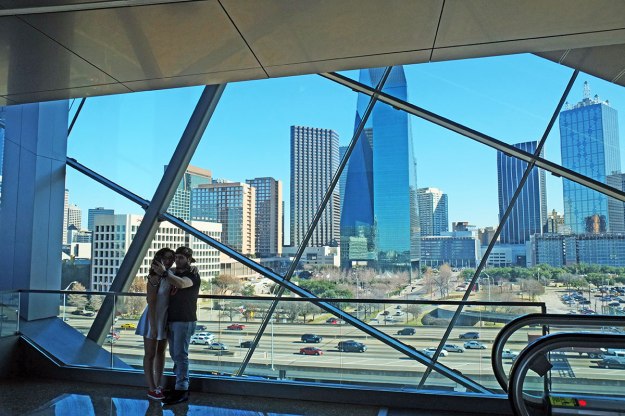 Meta- selfie at the Perot Museum.  A digital interface which converts a real-time image of you into tilting pixel-tiles.

Disturbing selfies at Dealey Plaza, Dallas.  Selfies with the Texas Book Depository in the background.  Even more disturbing:  there are two small Xs which supposedly mark the spots where JFK was shot.  We see tourists running out to stand on those spots to have their pictures taken, on what is a very busy street.   Right up there with funeral selfies for showing us something we didn’t want to know about human behavior. 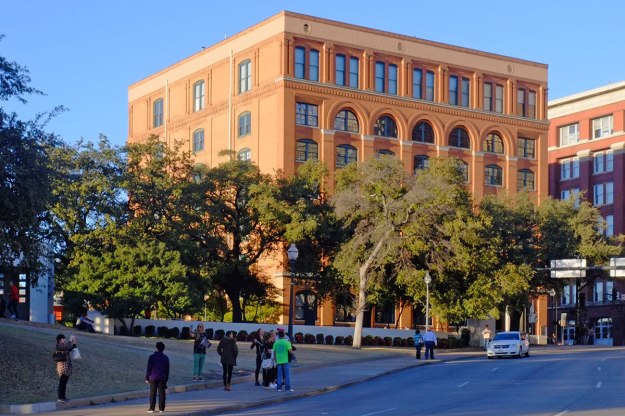 One more of the Safe Bison-Selfies™.  San Antonio.  Yesterday at the Grand Canyon we heard that not only do tourists get killed taking Bison Selfies, but last year at the GC, one was killed taking an Elk Selfie.  If only we’d known.

Alamo Selfies.  We begin to hit our stride again.  Notice the lack of Asian tourist selfies – they don’t get the Alamo. (I don’t really get the Alamo either.) 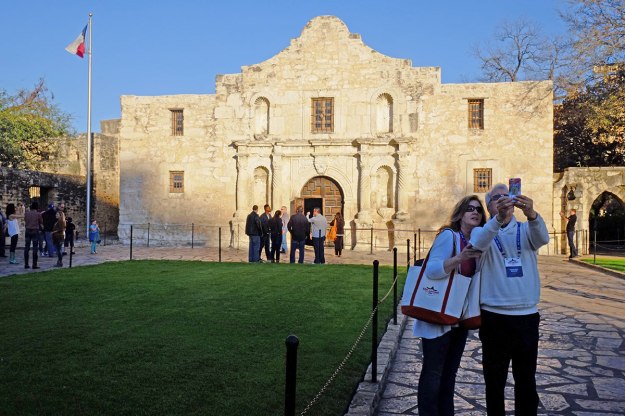 Attempted Double-Selfie, but one kid’s balking. 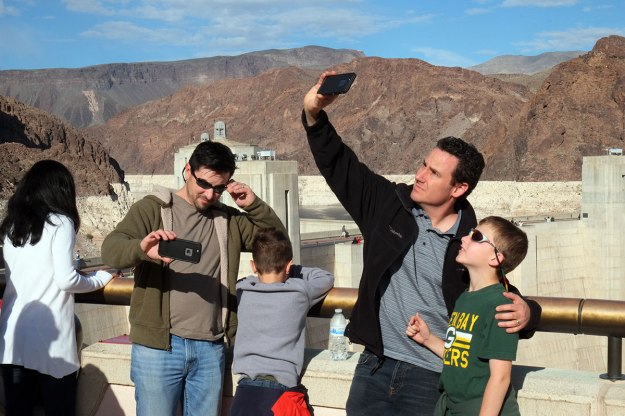 They have Selfie alcoves on the Hoover Dam, built 70 years before the selfie.

Zion Canyon, selfie in the Narrows.

Arches National Park:  the French have not yet discovered the Selfie-stick, so they have to use a tripod. 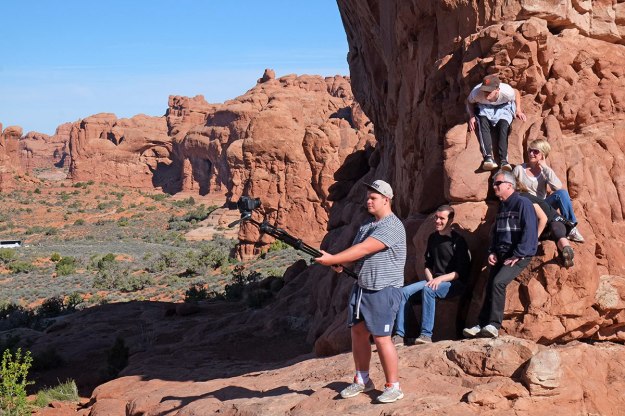 Horseshoe Bend in the Colorado River.  Selfies on the edge of the abyss – no guardrails, crumbly sandstone.  We see how much people really want the ultimate selfie.

The Japanese Cowboy-biker selfie.  They then asked to have Greta in the picture with them – we think they liked her fedora. 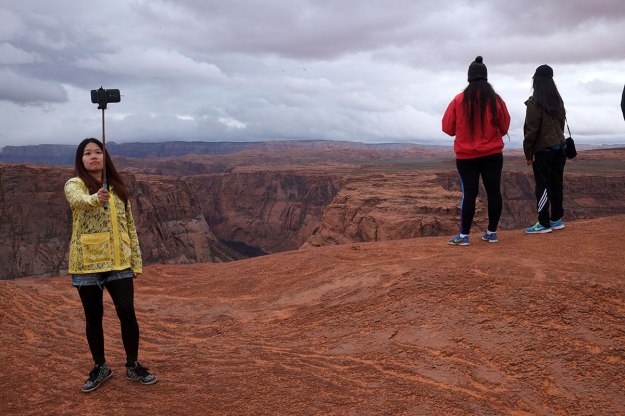 This photographer demonstrates the use of the Safe-Selfie Stick™ – hanging your phone out over the abyss on your stick, instead of inching out yourself.

It turns out there area few other ways to take Safe-Selfies™:  the sitting selfie. 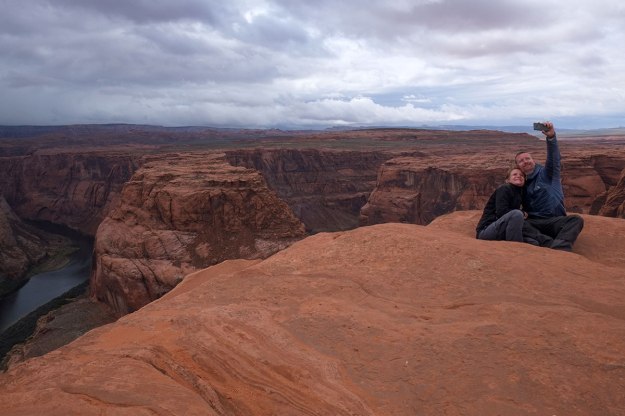 On the other end of the spectrum, the most terrifying selfie ever – the toddler at the abyss selfie. 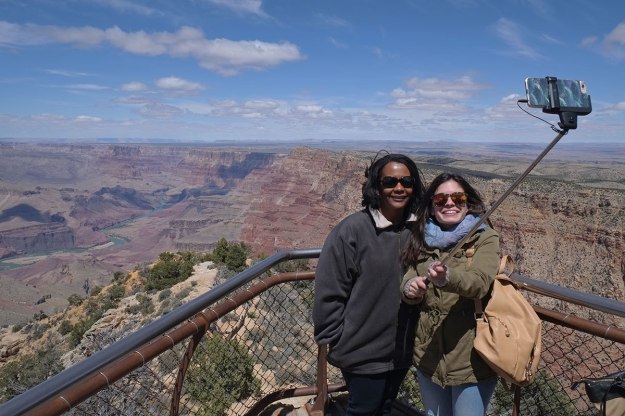 We thought this would be the ultimate location – I expected at least a triple-selfie.  I got close at one point, best I could get was a double. 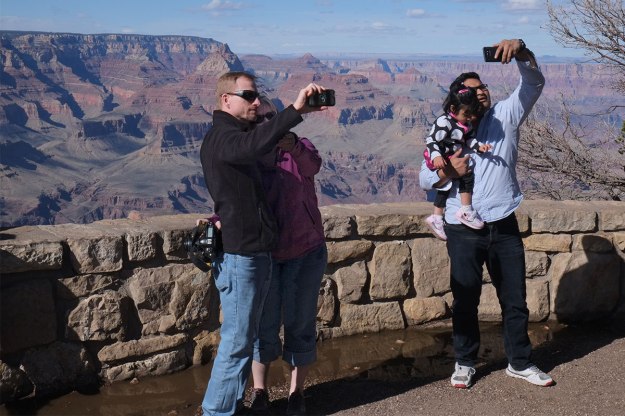 But in recompense, we came across something we’ve never seen before, a true selfie artist.  Whereas most selfie-takers are content to register their presence, perhaps with a smile, this young man took a series of selfies, each with a different gesture, or expression. 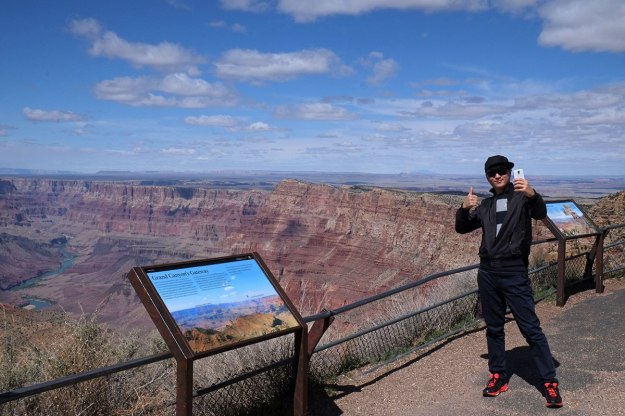 He seems to understand the potential of the selfie like no other. He doesn’t just document, he expresses a series of feelings in the selfies.  We caught up with him at a couple of overlooks.  At one point, he handed his phone to me and asked me to take his picture.  I was nonplussed, I didn’t see how I could do it better than him, but I tried. 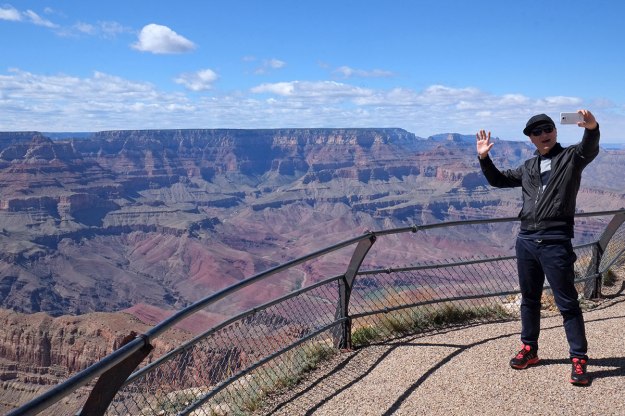 Selfie-Boy, as we call him, transcends the category of selfie-taking in a place.  The photo of the selfie suddenly was no longer about the selfie-in-place, it was all about him.  The Grand Canyon is lost in the distance, it fades out of the picture.  There is only the virtuosity of Selfie-Boy. 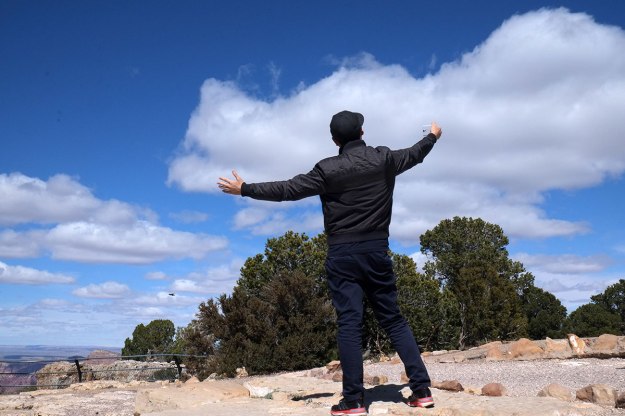 Seen within 24 hours, both at the Grand Canyon.