I’ve never been to West Virginia before, and crossing from Ohio into Pennsylvania we only crossed the little ten-mile-wide ear of it, but it counts as being in the state, and we can put it on the life list.  Along with Kentucky – we walked across the bridge from Cincinnati, walked around a bit and took some pictures.  It counts.

But we did go through Wheeling, where the National Road crossed the Ohio River.  The bridge is amazing – from the 1840s, it is the oldest important suspension bridge in existence.  It is not by Roebling, but he later retrofitted it with diagonal cables to help stabilize it.

The rest of the town was pretty damn depressing – many fine old buildings abandoned and boarded up, and literally everyone we saw on the street on a Saturday afternoon was homeless and/or drunk. It freaked Greta out – she had never really seen anything like this before. 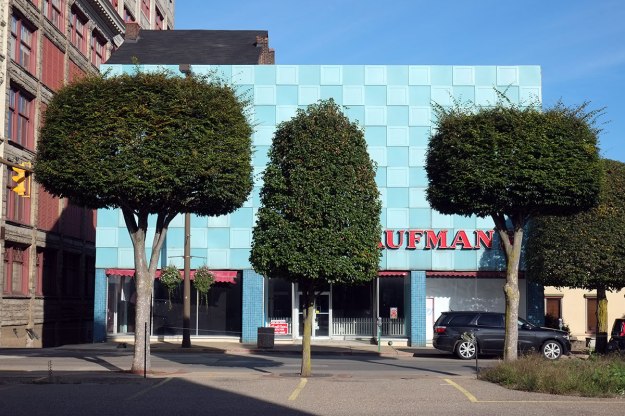 We’ve been spending a lot of time recently in cities that were rich and important 100 years ago, but now they aren’t  Some have fared badly, and some have recovered amazingly (such as Pittsburgh).  It’s eye-opening for a kid from Oregon (where nothing is that old)  –  the idea that a place that was once so prosperous could decline so precipitously.