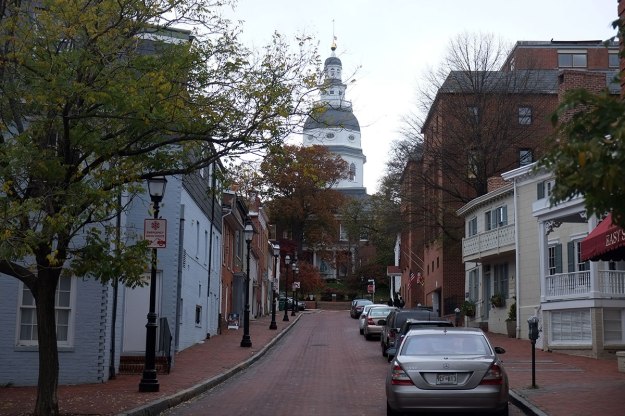 Visiting state capitols was not a goal of this trip, but we’ve come across eight so far.  The architectural quality of them, and the others I’ve seen, has been very good.  (The only truly embarrassing one being Oregon’s, which looks like a salt shaker designed by Albert Speer.)  But in every case, the quality of the capitol is overwhelmed by the mind-numbing banality of the state administration buildings which surround it.  They reflect the growth of state government in the mid-20th century, and the architecture  is always modernistic-pretentious, with lots of marble and “timeless” elevations.  Albany is obviously the most extreme, but it is not fun walking around any other state capital district either.  With the exception of Annapolis.

A beautiful, well-preserved, 18th-century state house, surrounded by a district which is still largely 18th- and 19th-century.  How can this be?  Where are all the soul-less boxes of bureaucrats?  Baltimore.  Maryland had the good sense to realize there’s no real reason why all the functions of state government have to be in the same neighborhood, and those large boxes were placed in a large city which was better able to accommodate their scale, both architecturally, and in terms of how many employees would have to work there.

The building itself is fine, the oldest continuously operating state house in the country, and was the temporary home of the US government in 1783-84.  George Washington resigned from the Army there, which is nicely reenacted by bronze statues (so much more satisfying than living reenacters). 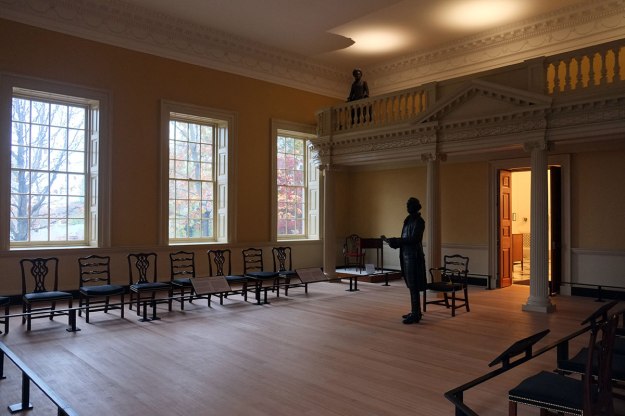 A beautiful central hall and dome

with an excellent sectional model to satisfy the architect-geeks.

The legislative chambers are accessible, and show their later remodeling

and other period rooms are well-restored.

But the best thing about the capitol is how is situated, on top of a hill, providing a focus for views from all over the city. 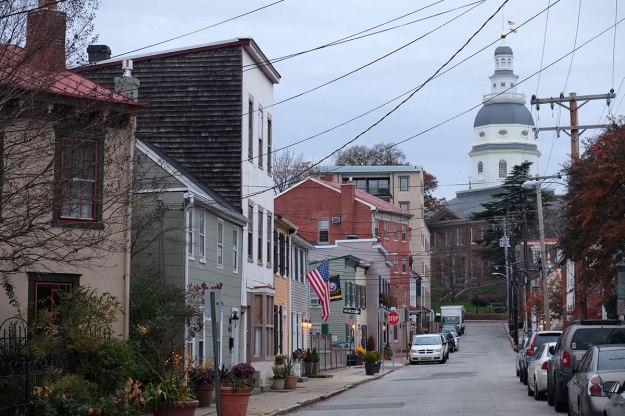 There’s a wonderful balance of the formal and the vernacular, what Krier calls the res publica and the res privata.  The state house is of central importance, but it is not the only important thing. Views down the main streets end in the harbor, as they should. 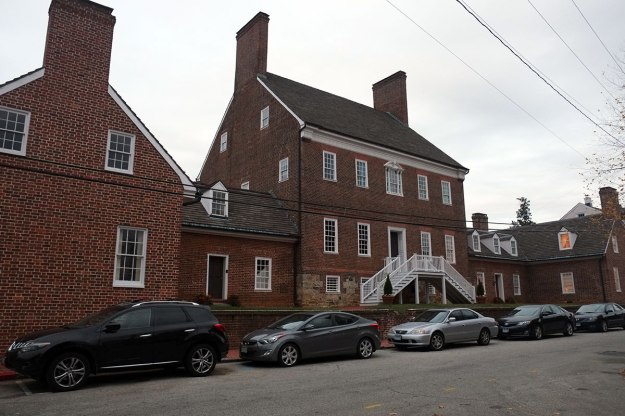 and small row houses and shops from the same period.

Some prominent locations are downright funky

and the buildings from different eras and of different scales are juxtaposed.

Some irregularity in siting is quite welcome, relieving the fairly uniform street walls. (I took this same photo 26 years ago.  It’s nice they got around to fixing the porch.) 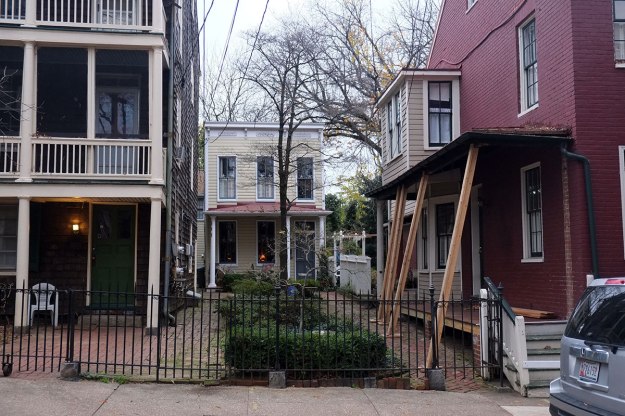 and there are just fine, elegant buildings from many periods. 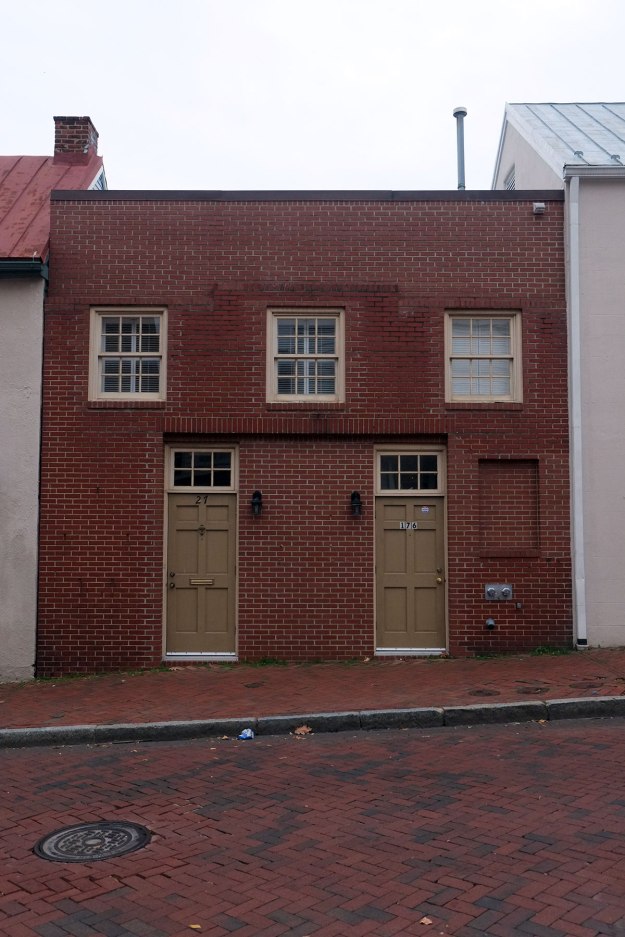 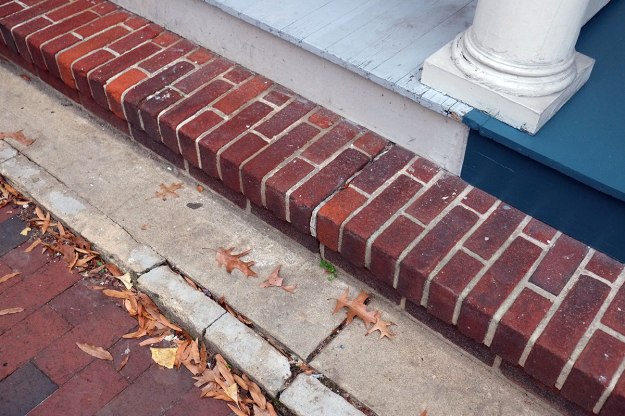 Annapolis is this very historic town, full of historic buildings, yet it doesn’t feel precious, or forced (although some of the stores do).  I think this is because they’ve avoided the ye-olde self-consciousness.  It feels like an old city that has people living in it.  They haven’t tried to iron out the anachronisms – it is not a city frozen at one moment in time, but comfortable with many.

They were also smart (or lucky) enough to not have many bad 20th-century intruders.  (I don’t think it’s at all impossible for there to be excellent modern buildings in a context such as this – there are many examples in Europe and a few in this country.  It’s just highly unlikely.)   Annapolis avoided the modernist disrupters (of course, if you go a few miles to the edge of town, it’s just like the rest of America), and also the faux-historical imitators.  It avoided urban renewal, and apparently it avoided grand redevelopment schemes.  Being in such a coherent urban environment makes you realize how rare they are in this country, and how we managed to dodge a bullet a few times. 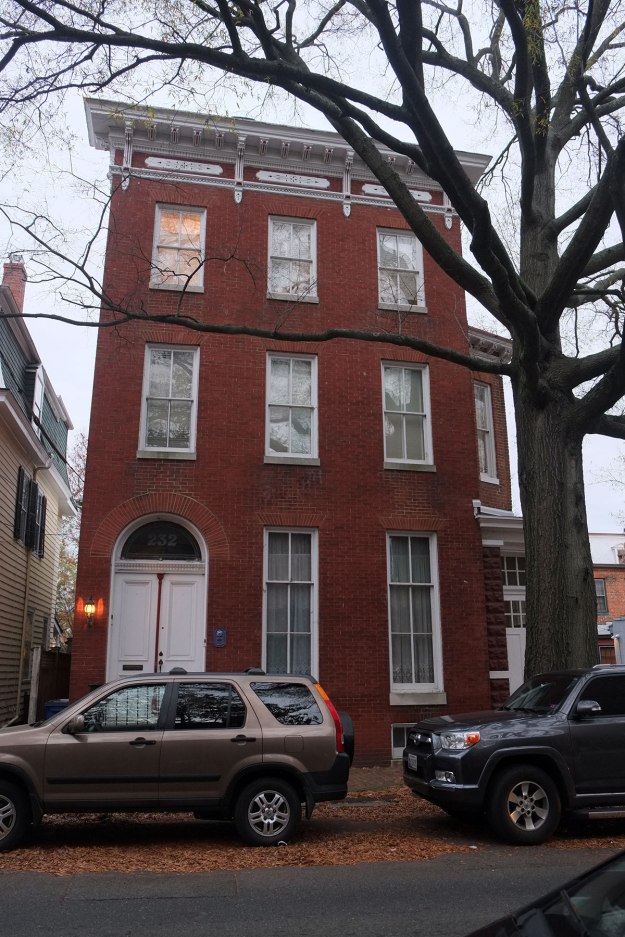