When I began teaching at the University of Oregon, I found that one of my colleagues, Bill Kleinsasser, was fairly obsessed with Henry Mercer.  Mercer was an archaeologist, collector and amateur architect, who built three buildings and started the Moravian Tileworks in Doylestown, Pennsylvania.  I dragged two of my sisters to see Mercer’s house about 20 years ago, and Laurie’s response was great.  First room:  That’s pretty cool!  Second room:  Cool.  A lot like the first.  Third room:  I get the idea.

But Bill Kleinsasser was right – it’s just that the Mercer Museum is the building to see.  Mercer collected a comprehensive assortment of technological artifacts from pre-industrial America.  Then he built a museum to house and display them.  Concerned with fire destroying the artifacts, the museum was built of reinforced concrete, which is apparent on the outside, a strangely flat medievalist fantasia.

It’s adorable, but a bit twee, with vernacular forms in a strange material.  The roofscape looks like a giant birdhouse, but somehow I love it. 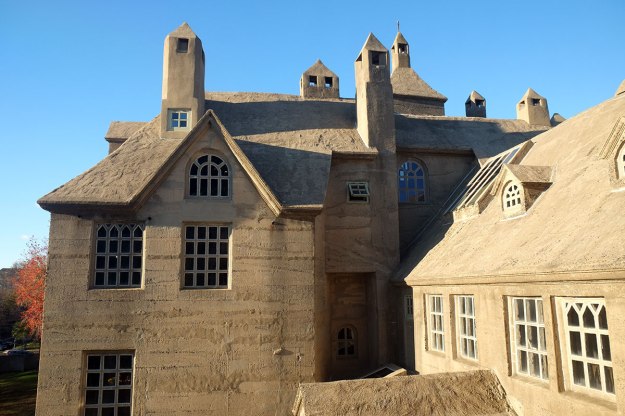 You enter through a new lobby wing, go up some winding stairs, and step out into this:

a four-story atrium crammed with more stuff than seems possible.  It’s feverishly hallucinogenic.  Every surface is covered with stuff, even the ceiling

and then the really big stuff is hung out in space.

It is so far from our current model of what a museum should be like that it’s hard to process.  Where are the blank white walls?  Where are the wide open spaces across which we can contemplate an isolated, perfect object?  The Mercer Museum shows that a museum can work extremely well while not meeting our aesthetic preferences for abstract minimalism.  The central atrium is surrounded by vaulted side aisles, on the the outside of which there are niches, almost chapels, each of which explains and shows many artifacts pertaining to a specific technology, such as lighting:

or a cabinetmaker’s shop, with its molding planes:

The sidewalls are heavily glazed, and the light filters through the niches and side aisles into the atrium. 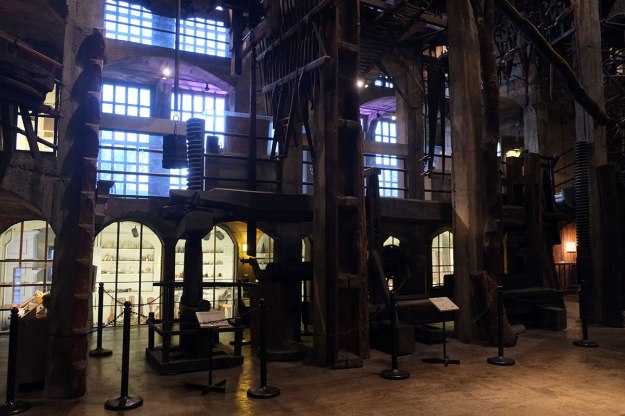 and there are other random artifacts scattered around.

as in a separate two-story space where there are perhaps thousands of panels from cast-iron wood stoves, along with firebacks, each which is highly wrought and decorative.  But the space itself grabs your attention, with its Orientalist detailing and complex spatial moves.

The exhibits are extremely clear – I now know a good amount about the practices of 18th century technologies – such as tinsmithing – which were just vague ideas to me before.  The layout of the building also supports this pedagogical approach – you may be looking at the small tools and labels in a niche exhibit, and the the label says, turn around and look behind you for a big artifact – like a whaleboat or a stagecoach – which is the product of this technology.

It’s a museum which can be approached from many directions and found to be satisfying.  Kids love it, both the artifacts and exploring the space, with surprises around every corner.  Grown-ups just stare, not ever having been in a place like this before.  And some architects wonder why everything we do now has to be within such narrow parameters.  Or whether there can’t be a closer fit between the architecture and the contents.  Mercer’s buildings on their own are quirky and interesting, but not all that good.  But when you fill one up with amazing stuff, there is synergy, and the experience is fantastic.