Last day in Chicago, time to do the serious architecture geek afternoon.  Knowing how much Greta would hate it, I dropped her at the Shedd Aquarium and walked down to IIT;  for you non-architects, the Illinois Institute of Technology, where Mies van der Rohe designed the campus plan and many of the buildings.  (Also, our former dean Frances Bronet is now the provost there, so I thought I should check it out to see how it compares to Lawrence Hall.)

I had a jarring introduction to the campus, one where you start to question your grip on reality.  Having just walked four miles down Michigan Avenue after a lunch of Chicago pizza and a beer, when I got to the campus I went up to the first building I saw that wasn’t a locked dorm, looking for a bathroom.  Straightforward glass and steel facade, I went inside and found a bathroom right  by the entry.  I emerged, turned the corner, and came across this:

Toto, I said, I don’t think we’re in Kansas anymore.  I walked out a different door, and saw this: 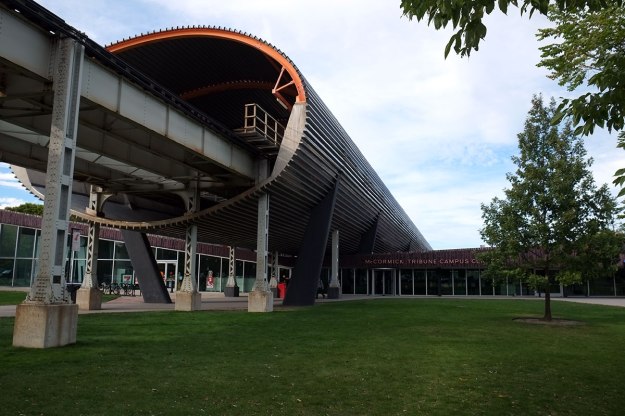 Aha, I said, it’s the Koolhaas building.  Reassured that I had not stumbled upon a break in the space/time continuum, I continued on in search of Miesian order.

The campus was as expected, relatively low buildings in a highly-ordered site plan, where the mature vegetation provides the relief from the Miesian grid.  Similar to other American urban campuses, where there is a definite end to the city fabric as you enter acedemia, pleasant and relaxing after the bustle and decay of lower Michigan Avenue.  The buildings (whether by Mies or SOM) are all variations on the Miesian theme – strictly rectilinear, repetitive bays, with inflection in the facades according to function.  It’s like the Goldberg Variations – how many subtle change can you make within a rigid and limited system.  Quite a few, and it is definitely not for non-architects. 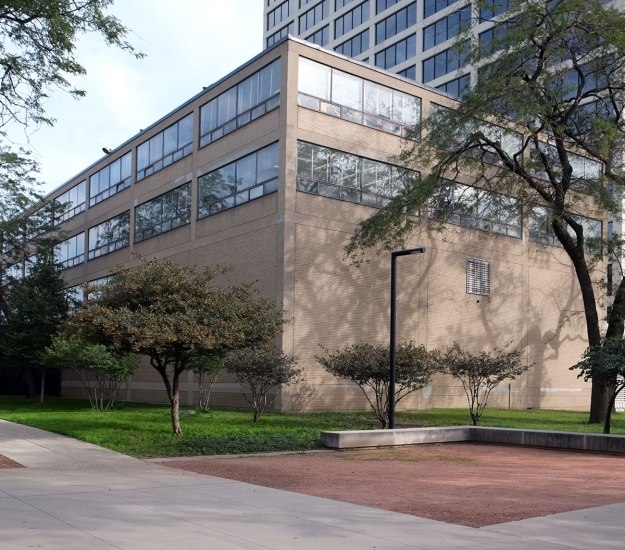 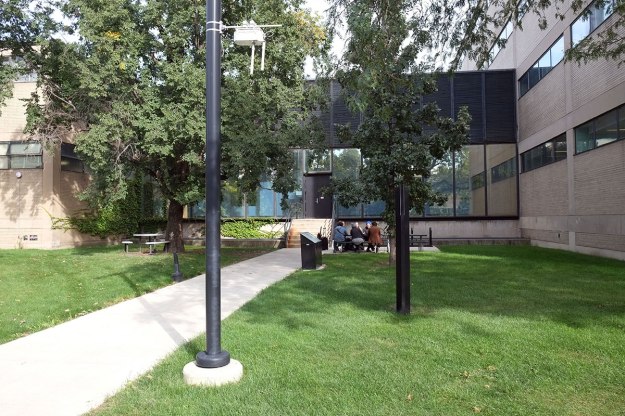 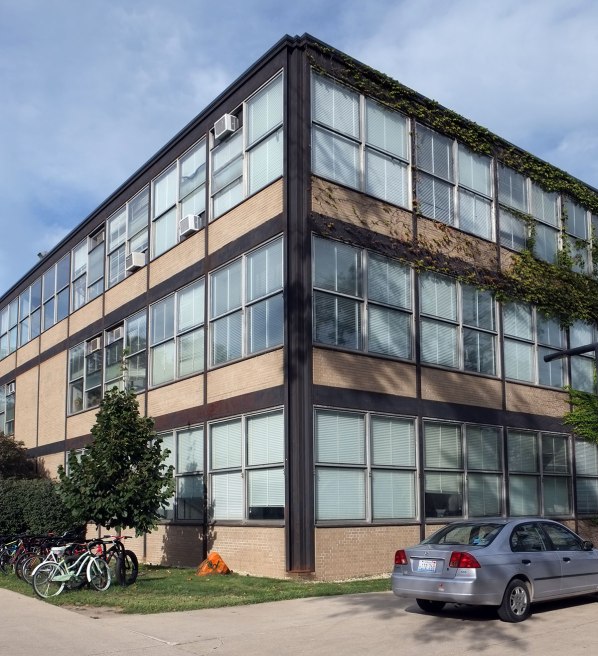 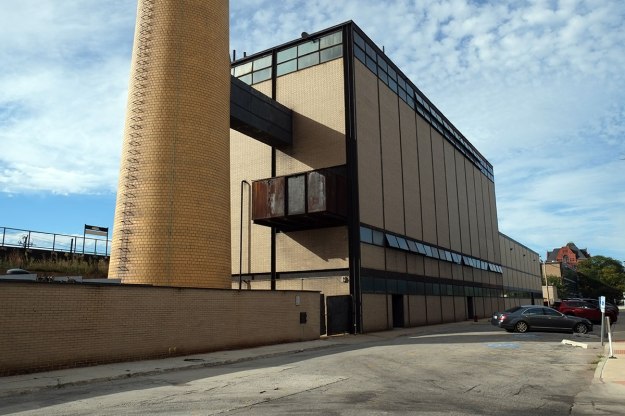 Then you get to the apotheosis, Crown Hall. 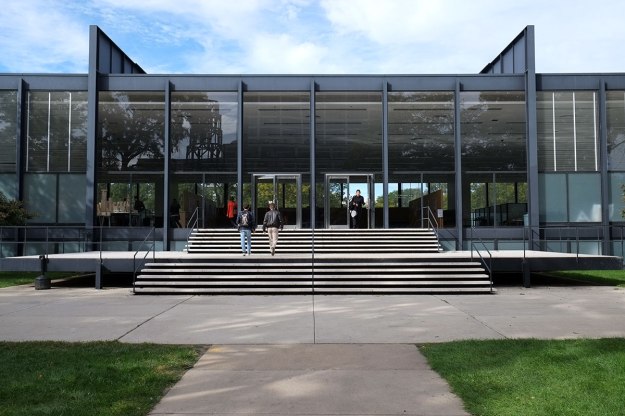 You’ve all studied it, you know exactly what it’s going to be like, and it is still a surprise, spatially, tectonically, and especially in terms of use. 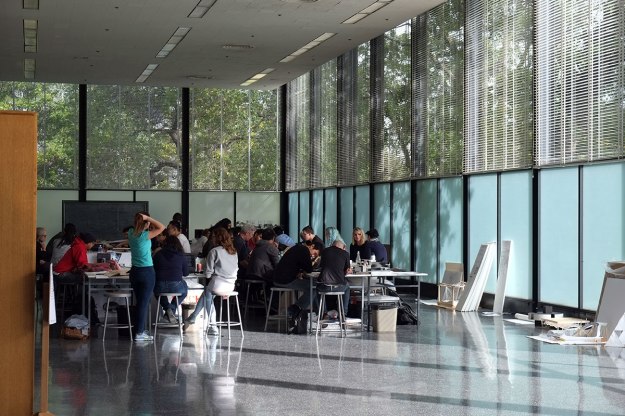 Studio – everyone sits together at long tables! 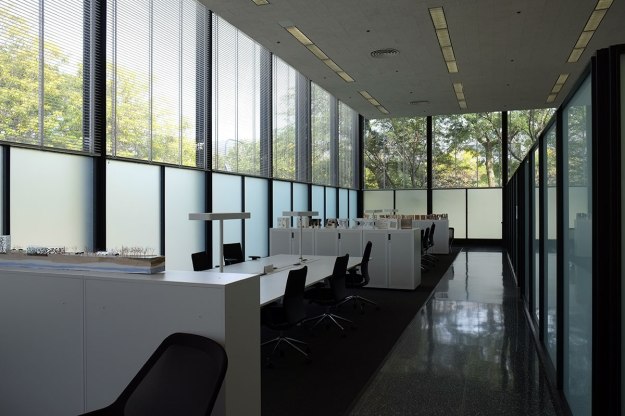 The faculty zone is much neater than the studios 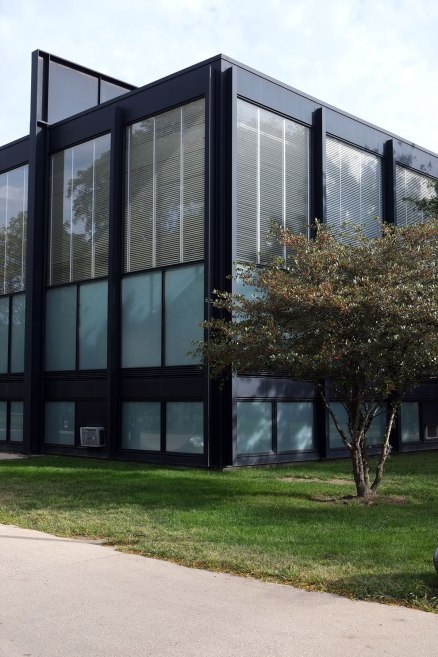 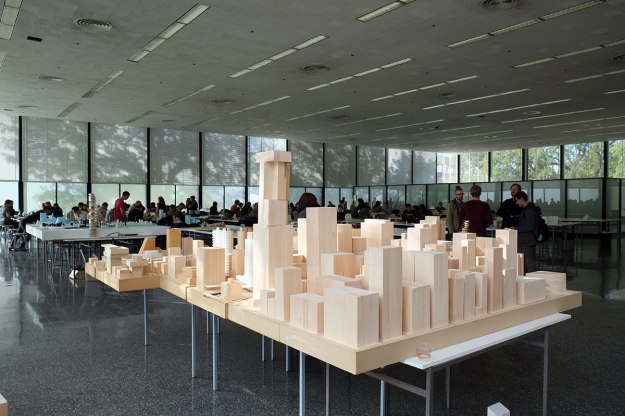 Nice model, they probably use it a lot 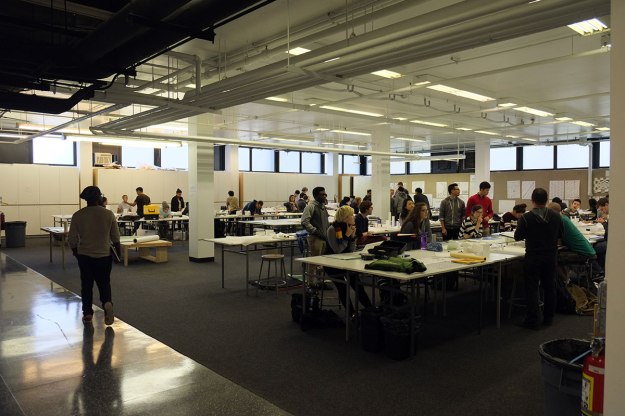 It is a great building, where you feel the expanse of space (there are no internal columns or full-height walls, as the roof is suspended from exterior girders), and the light washes through the building uninterrupted.

But having had enough of Miesian order, I decided to revisit the Koolhaas.  A fun building for a student center, angles and ramps and colors and chaos, with an elevated train in a tube on the roof. Then I started to wonder, how different is this really from the 1970s wing of the EMU on the UO campus (which was just demolished), or any of the other 60s student unions that ultimately derived from Erskine’s student union in Stockholm?  Was Erskine the first wave of dissent from universal space, and Koolhaas represents the second? 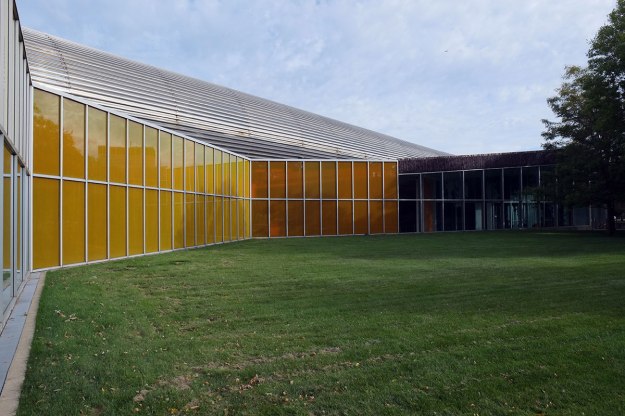 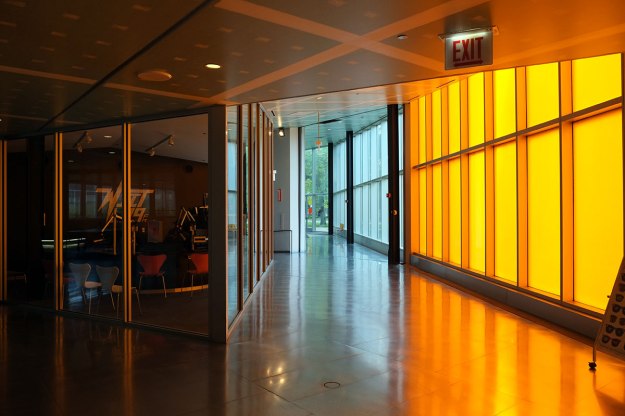 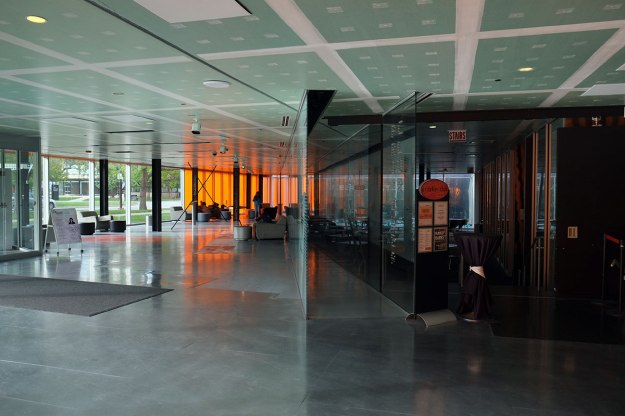 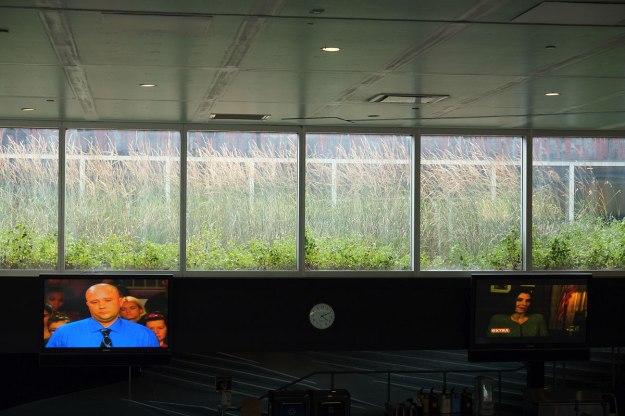 Koolhaas has set up the screens in the cafe that constantly play Judge Judy on a loop.

This is real (albeit warped), not a strange photo collage. 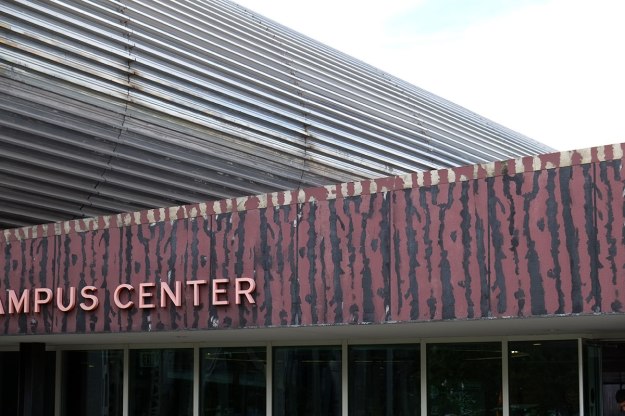 Mies would not have approved. 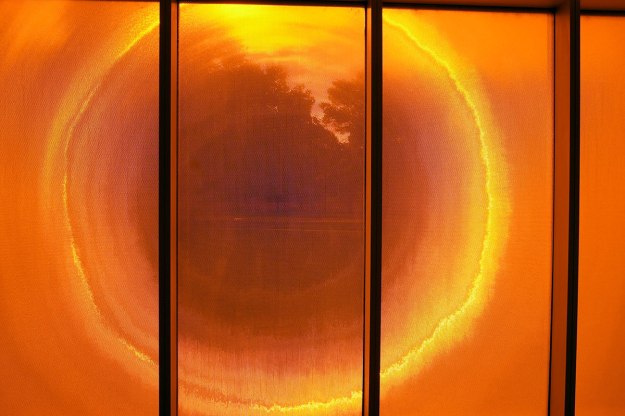 The strange refracted orb/view/sun follows you down the hall. 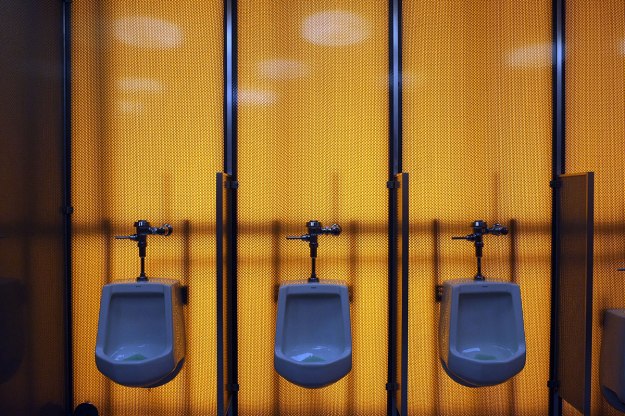 That last overwrought bathroom did me in, and I ran in search of one more bit of Miesian serenity.  I found the famous chapel, which was simple and elegant, not at all the minimalist joke that Jencks decried. 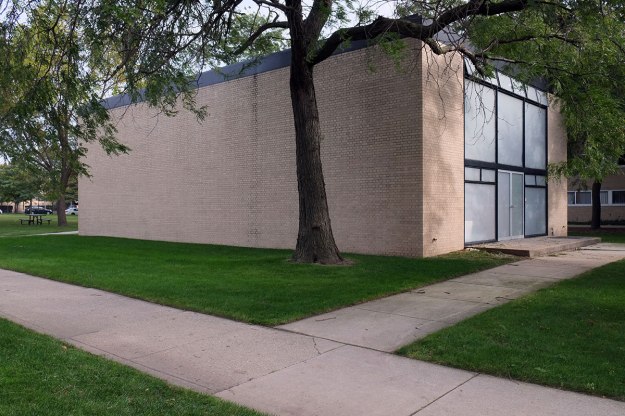 But when I went inside, I encountered this 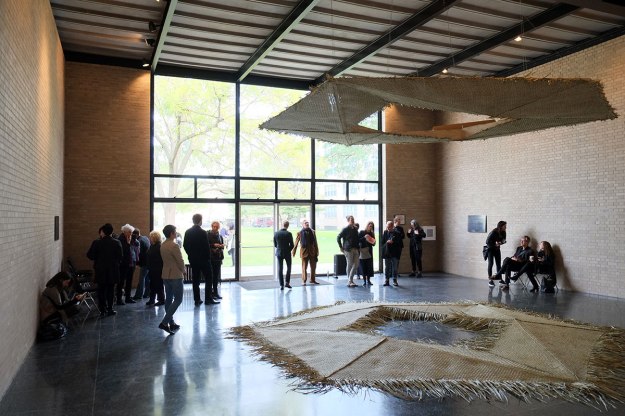 a roomful of architects (in their ceremonial black garments), worshipping at the First Church of Mies, Architect.

I left quickly before they noticed me, and returned to the messy world of the South Side of Chicago.