As I was planning this trip and listing all the old friends we’d be able to visit, I discovered, to my amazement, that Greta was actually interested in meeting more of my college friends. She knew Dan and Mike and Bob, and she found them really entertaining – smart and funny and very offbeat, so she assumed the others would be the same.

I met Isadore Katz because he went to prep school with Bill, one of my freshman roommates. I distinctly remember this very intense person showing up during freshman year, complaining about Rochester and its miserable weather, where he had made the mistake of deciding to go to college. The next year Iz rectified this by transferring to Wesleyan, and he would stop in to visit us when he was back in Boston. He lived with members of our crowd sometimes in summers, and back in 1977 he and I spent a week together hiking the ridgeline around the Pemigewasset Wilderness in the White Mountains.

Isadore moved back to Boston to work as a consultant after college, so we hung out for a couple of years until I moved to New York for grad school. Isadore started at the Sloane School at MIT at the same time, and when I asked him how business school was, he said, You’d be surprised at what passes for a concept around here. He lived with us in NY during a summer internship in 1983.  After school Iz worked in the expanding computer industry, and met his wife Chris, a very cool and laid-back architect who had the good sense to not marry another architect. They moved off to Silicon Valley in the mid-80s, and after I moved to Oregon in 1990, I would see them whenever I went down to the Bay Area. Iz and Chris raised three wild and crazy girls, who have now grown up to be in law school at Berkeley, working in tech in Silicon Valley, and in college at Barnard. (One of the secondary goals of this trip has been to reconnoiter the terrain on how smart and independent girl-children turn out.)

Isadore has always had another one of those jobs where we can never quite figure out what he does, although in this case it’s not due to the vagueness of the job description, but rather to the complexity of the technology involved. He’s mainly been in the management end of the high tech industry, although after the Crash, he spent a couple of years working as a consultant at the Veterans Administration, essentially reconfiguring their database operation. About a decade ago, back in Massachusetts, he started a company that, as far as I can tell, designs software for chip manufacturers to help them model real, versus theoretical, chip performance, before they put a design into production.

Is and Chris live in Harvard, Mass, out in the woods past I-495, a short walk from Fruitlands, the transcendentalist utopian community started by the Alcotts and others.  Staying with them felt like being home – a modern house with lots of windows looking at the trees, a few days eating and drinking, and relentless storytelling and joking with two of the cleverest people I know. Isadore’s brother Seth, another friend from long ago, dropped in from his home in Florida, and we all got to reminisce about crummy apartments in Somerville and life before we became middle-aged. 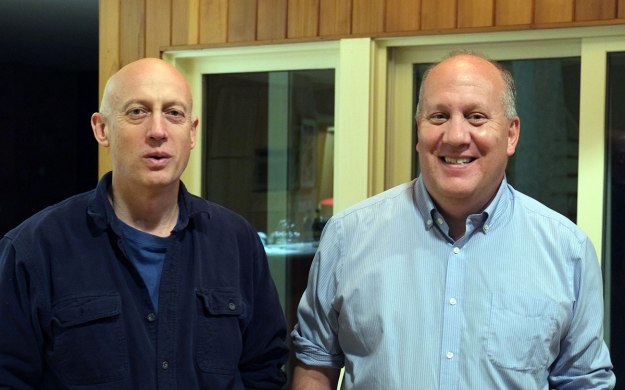 Bob Beckman was one of my freshman roommates. I walked into our five-person suite, and saw that half of one room was already occupied, by someone who had left an olive-drab, gigantic filing cabinet, with a bar and padlock across the drawers. I immediately decided to take my chances on the other double room. Bob showed up and confirmed my take on him – a serious science nerd from the Philadelphia area, whose career orientation had been jumpstarted by his technocrat father (who had also supplied the government surplus file cabinet). In high school Bob had been a Westinghouse science competition national finalist with his research into sleep patterns, and this direction continued with his advanced standing concentration as a pre-med.

Bob’s seemed to conform to the absent-minded nerd stereotype: incredibly brilliant and relatively incompetent in dealing with the real world (manifested in such incidents as his first attempt to cook a hamburger, when it became clear he had no idea that you had to flip them). But contrary to type, Bob was one of the wittiest and most social people around. After graduating from college early, Bob worked in a lab for a year, and had weekly gatherings at his apartment for his college buddies, featuring endless guitar jams and truly awful spaghetti dinners.   He also began his association with a lab at UW, furthering his research into a mathematically-based approach to understanding cancer. (Yes, Bob has another one of those careers I can’t understand, despite his repeated efforts to explain it to me.) Bob then entered the Harvard-MIT joint MD-PhD program, sharing an apartment with Isadore throughout this period, as his cooking skills marginally improved after determined effort.  Bob moved off to California for his residency, where he met his wife Susan, a medical social worker from Rhode Island, whose good sense, unflappable disposition, and extreme competence have provided the bedrock upon which Bob could continue his stereotypical scientist life.

Bob worked as a pediatric oncologist, but finally gave up on the clinical career when the unique American medical insurance situation made it impossible for him to practice medicine in the way he knew it should be practiced. He went to work on the East Coast for a succession of pharmaceutical companies over the next two decades, designing cancer drug trials, and trying to survive the corporate politics, while he and Susan raised two great kids, Daniel (now working for the NPS at Saguaro, whom we plan on visiting next month) and Laura, an artist in New York. Bob was appointed a fellow at the Institute for Advanced Study at Princeton, where he furthered his continued interest in cancer research, while still holding down his day job.

A few years ago Bob mentioned that with the kids grown and retirement money stashed away, he’d like to return to research full time, using the last decade of his career to consolidate his theoretical approach to cancer. I warned him that the institutional nuttiness of academia was different from, but not necessarily any better than that in large corporations, but he didn’t listen. So last fall Bob got an appointment as a professor at Georgetown. He works with some graduate students, but his main job is to secure funding and pursue his unique direction in cancer research. We stayed with Bob and Susan in the little rowhouse they’re renting in Georgetown, where they are thrilled with the possibilities of urban life, after a few decades in suburbia in the northeast.

Norman Rave was another resident of our freshman dorm of misfits and savants. He arrived as a relatively conservative graduate of a Jesuit high school in Cincinnati, and along with us other lapsed Catholics, left the trapping of that life behind fairly quickly. Going off to college allows you to reinvent yourself, and Norman took advantage of this in the best possible way, combining his academic interest in biochemistry with his other strong predilections for literature and philosophy. Long rambling conversations with Norman about the meaning of life were some of the highpoints of college for me.

Norman always wore a weirdly wide range of eclectic tee-shirts, which I at first took to be the expression of an extremely ironic viewpoint, but it turned out that he just shopped at a store in Cincinnati which sold remaindered and misprinted shirts really cheaply.  When this sartorial approach combined with Norman’s decision to stop cutting his hair or his beard, his appearance became the quintessence of the mid-70s college student, and he was known as Troll thereafter. 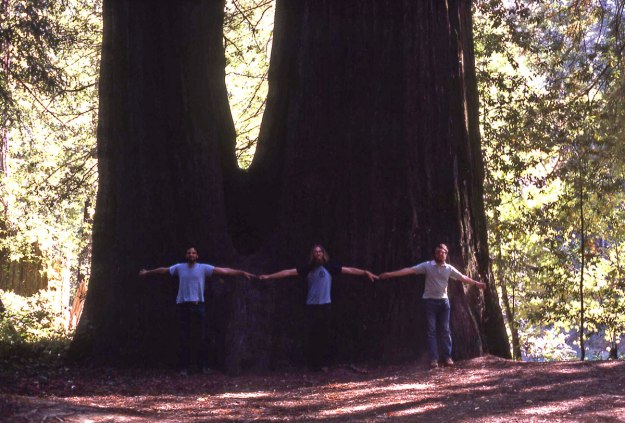 Norman got into grad school at Berkeley, so the summer after college, he and Dan Rabin and I drove across the country together, packed into an old Datsun B210 with all of Norman’s possessions. The person riding in the backseat was unable to move at all, and our overall appearance was such that we were shocked at the laxity of US law enforcement in that no one ever pulled us over. This was the first cross-country drive for any of us (I am in the middle of my 11th right now), but it just started a trend for Norman. He decided he didn’t like grad school, so he drove back to the east, and then back and forth a few times as he tried to figure out what to do with his life.

At some point he stumbled upon a position working in a lab at Princeton, which was of little long-term professional import, but where he met Ginny, a post doc in the lab, who would later become his wife.  (I didn’t get  a good photo of Norman and Ginny, but they still look remarkably like they did 35 years ago, except for the hair length.)

They lived in Boston and then DC, as Norman decided he was more interested in the policy side of environmental issues, and he attended Georgetown Law School. Norman eventually ended up at the DOJ, while he and Ginny raised three kids in Rockville. Ginny spent years as a full-time mom, but began teaching high school science about ten years ago, and recently led a group of students on a field trip to the Amazon (she is nothing like any of the science teachers I ever had.)

We got to meet Kate, who is living at home while considering grad school (maybe in Oregon), and Will, who attends George Washington University. (Greta realized she had picked up yet another member for her cool nerdy posse when Kate opened the front door wearing her Welcome to Nightvale tee shirt.) Helen is off at Harvard Law, where she has actually studied environmental law cases that were argued by her father. Greta and I had a great time hanging around with all of them; most of my friends are now empty-nesters, and eating family dinners and spending time with a crowd was a nice change on our trip. And Norman and I got to sit around drinking bourbon and yacking, which we hadn’t done in 20 years.

At one point I asked Greta what she thought about all these friends she’d now met. She said it was fun, but strange. Little kids largely grow up in the world their parents construct for them, listening to the stories their parents tell. Greta had heard stories about these people throughout her life – Bob Stories are an especially iconic category among my people – and long ago they had assumed almost mythical status in her cosmology.  So while it was nice to meet the real people, the legends were somewhat diminished now.  Greta enjoyed getting to know Norman, but she’ll never have the same innocent fascination with Troll that she had before.