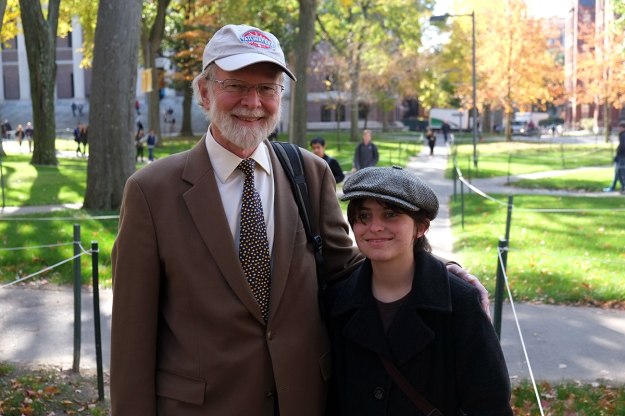 Jim McCarthy and I first met almost 40 years ago.  I was in college and got a note from my mother, saying that my second cousin from Oregon was at the Bio Labs at Harvard and I should go meet him.  I dropped in, we chatted for quite a while, and then I moved to New York and didn’t see him again.  About 30 years later I was web-surfing and watching a Bill Moyers program on climate change on PBS, when this bearded Harvard biology professor named James J. McCarthy appeared.  I emailed him to ask whether he was my cousin, and he replied yes, he had been on the Harvard faculty ever since, and by the way, he had grown up in Sweet Home, and all the rest of his family lived in or around Eugene.

In the intervening years, Jim would come to Eugene from time to time to visit his mother (who has since passed away), and we got to spend some time with him and meet more of his family.  It was quite intriguing to get  to know a branch of your family that you weren’t really aware of – certain looks or expressions seem improbably familiar;  Jim actually looks a lot more like my grandfather than anyone in my immediate family does.

Jim has had an extraordinary academic career.  I won’t list all the details (I don’t want to  mimic those colleagues who introduce a visiting lecturer by spending 15 minutes reading their CVs), but he is the Alexander Agassiz Professor of Biological Oceanography at Harvard, and for twenty years was the Director of the Museum of Comparative Zoology (MCZ).  Most importantly, he has been at the forefront of climate change research and action throughout his whole career as a key member of the Intergovernmental Panel on Climate Change, and currently is the chair of the Union of Concerned Scientists.  (There are more details at http://www.oeb.harvard.edu/faculty/mccarthy/JJMpage.html).  I’m frankly in awe of what he has accomplished in his career, as he embodies this ideal of the academic life – a cutting-edge researcher whose activism has had a great impact at the international scale, all while being very involved in university governance and caring deeply about teaching.  (We at least have the last two characteristics in common.)

Throughout this trip I’ve visited many friends in academia, and it’s been revealing to discover how similar our concerns are about the direction in which universities are moving, even when our institutions are quite different.  Jim and I also share an academic  focus on climate change – his at the fundamental level of figuring out what is taking place in the global environment, mine at the more pragmatic level of how the architectural profession and building industry should respond to this most important challenge.

Greta and I were walking across Harvard Yard and ran into Jim (we were going to try to find his office later in the day), which I regard as payback for the time I was biking home in Eugene and unexpectedly ran into him as he headed to the Law School to meet with Mary Wood.  We rendezvoused with him the next week for lunch, and then he took Greta on a behind-the-scenes tour of the collections at the MCZ, where she saw the marine specimens, supplementing what she’d seen of amphibians and reptiles with John Wenzel in Pittsburgh.  (Meeting leading scientists and learning about their work wasn’t one of the planned goals of this trip, but it has emerged as one of the most important ones for her.)  I  sat in Jim’s office and Skyped into the thesis presentation of one of my honors college students back in Eugene, and I think the backdrop of his bookshelves and papers lent me an appropriate online academic gravity that calling in from a Starbucks wouldn’t have.  (I’m currently thinking about how I might be able to bring this semblance of academic gravity back to Eugene with me.)

Greta and I both really enjoyed talking with Jim, and we appreciated how he let us barge into his busy academic life (the longer we’re on this trip, the harder it is for us to remember that most people have normal lives with commitments and job and schedules.)  Greta got a glimpse into Harvard as it really is – an amazing collection of smart and engaged people working on serious issues – which was a good antidote to the old alumnus nostalgic sightseeing trip she was getting from me.