While revisiting a city where you’ve lived as an adult may elicit mixed feelings of familiarity and strangeness, revisiting a place you knew well as small child feels like coming home, especially if that place has barely changed.  My grandparents vacationed in Chatham nearly every summer for most of their lives (but unfortunately always stayed in the same guest house, instead of buying a place when they could have).  So my family spent a few weeks there every summer since I can remember.  I loved it as a child – the cool nights, the old, small town so different from our New York suburb, the ritual of walking to the beach every day.  I think my interest in architecture and towns can be traced back to those early summers.  Once again I wanted to show Greta a place where I had grown up by the sea, so she could see how that related to our own house on an island.

Chatham has changed so little that it was like being in a bad romantic movie where you step back into your earlier life.  Not only were the buildings unchanged, but many of the same businesses were there, such as the Mayflower, where one bought kites and beach toys and other critical things.

The cottages where we stayed were all gone, replaced by new McMansions, but the center of town has endured. 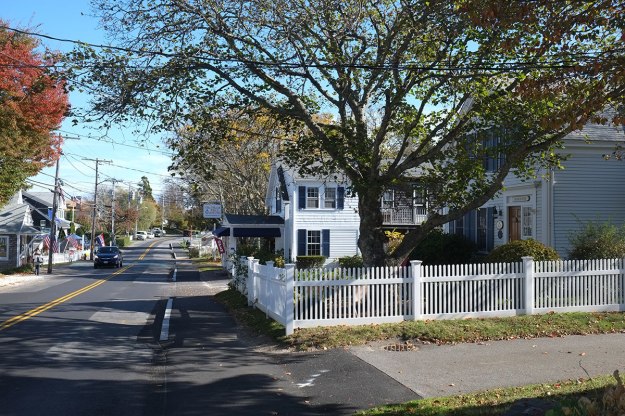 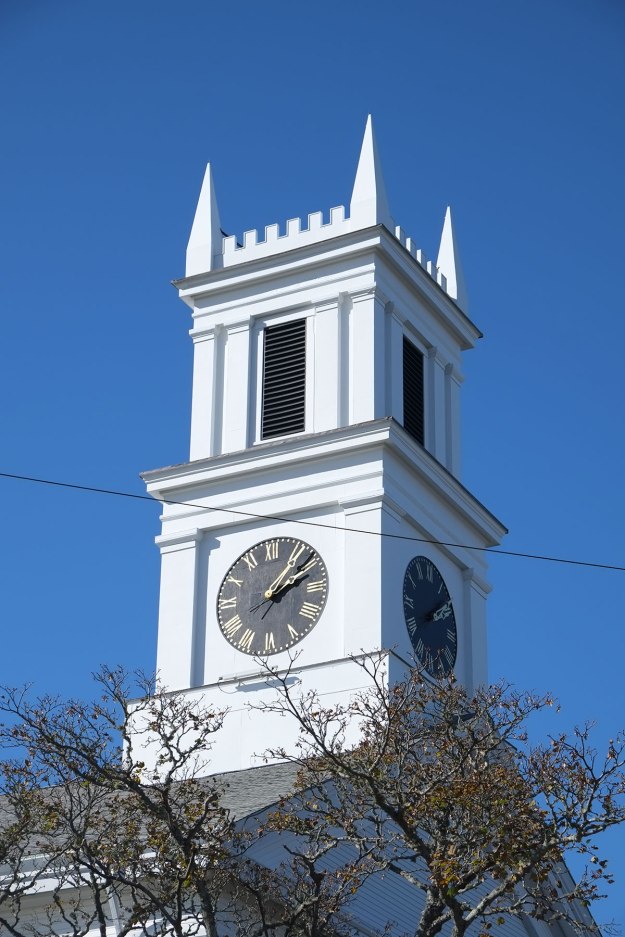 The most memorable part of the town is the walk along Main Street to the Lighthouse Beach.  The buildings are superb, but even more important, the open spaces of streetscape, yards, and drives have a wonderful scale that makes the walk a pleasure, no matter how often it is repeated. 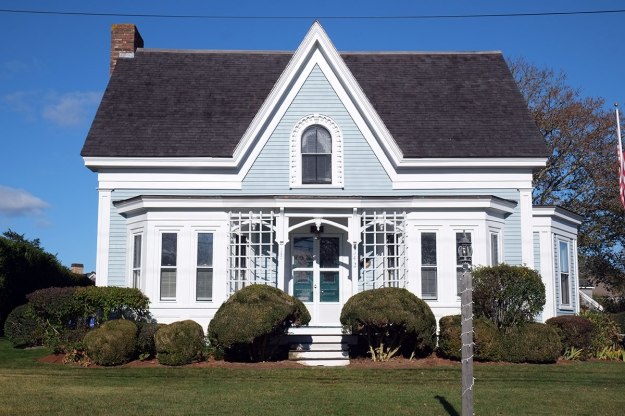 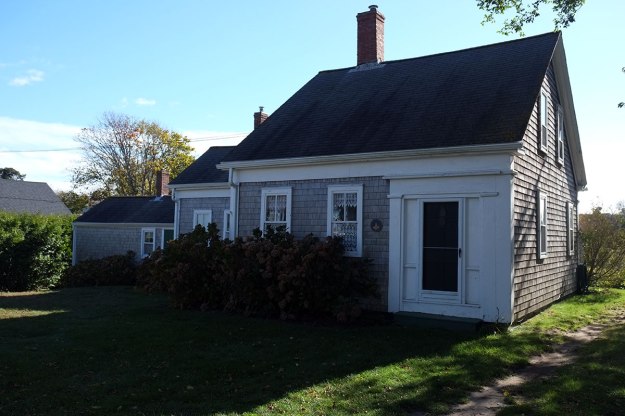 As it nears Pleasant Bay, Main Street makes a turn, and that corner is occupied by a beautiful open yard, a  gift to all the passers-by.

Glimpses from the street to the bay open up between houses. 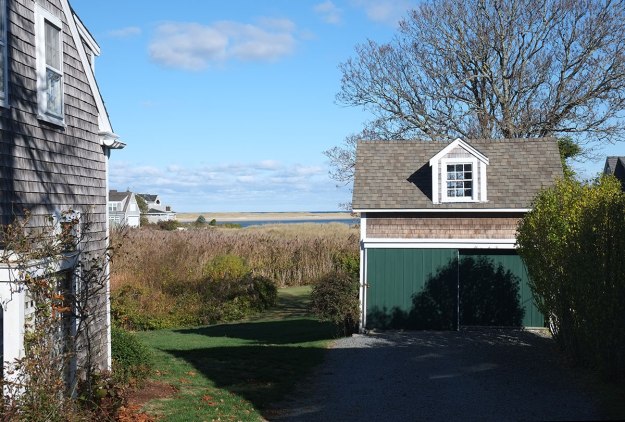 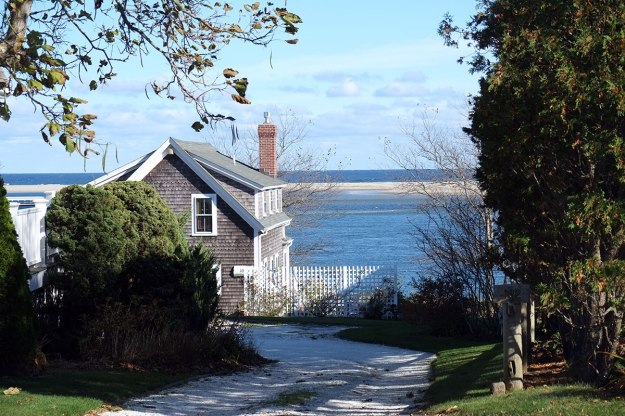 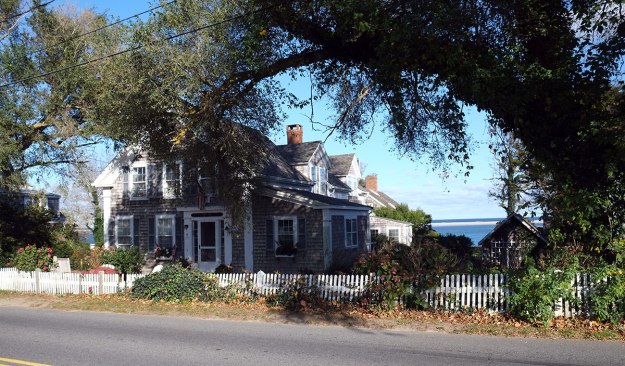 The only discordant note comes from the spite-painitng of a Greek Revival gem.  It was previously a gift shop, but now is the home of a local non-profit.  Apparently the town denied their request to alter the historic building, so they did their best to ruin the street for all.  It shocked me that in a town where the individual homeowners have so carefully stewarded the experience of the public realm, a community organization can be so self-righteous and monomaniacal.

Other treasures remain.  This may be my favorite porch in New England, looking across the yard to an ancient copper beach, once again sharing this space with the public, rather than hiding it away. 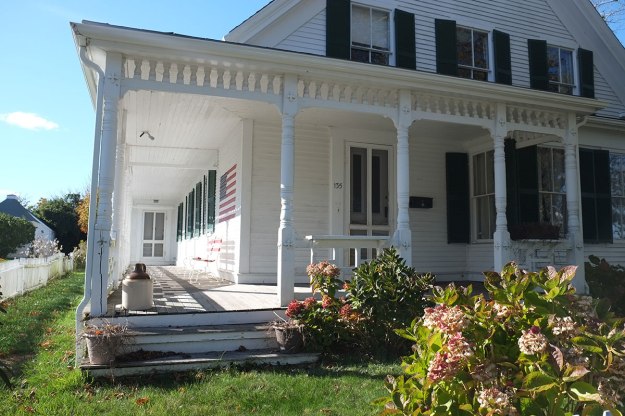 One arrives at the lighthouse, which they must have copied from an Edward Hopper painting. 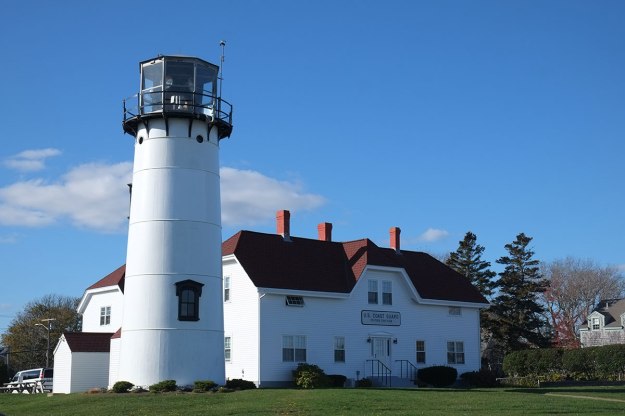 The beach across from the lighthouse.  Strangely, this has changed the most.  When I was young, the barrier beach to the east was continuous beyond Pleasant Bay, and access out to the ocean was to the south past Monomoy Island.  A storm in 1987 broke through the beach here, and in 2007 another storm created a large opening to the north.

In contrast to almost every other place we’ve visited, here the built environment seems permanent, while the large elements of the landscape are in continual flux.