Jon and I have been friends since freshman year in college, when we both lived in Hurlbut Hall.  Even in a dorm full of eccentrics, misfits and savants, Jon was noticeable, as he seemed the antithesis of many Harvard stereotypes.  In a place where many are endlessly yakking, Jon was quiet, almost non-verbal, and extraordinarily gifted in dealing with the spatial / physical world. Surrounded by self-promoters who had been polishing their resumes since 8th grade, Jon just quietly did what he did, never calling attention to it.  And in an academic environment that valued linear processes and rationality above all else, Jon was the most intuitive person I had ever met.

Jon was an engineering major, but with a designer’s approach rather than a purely analytical one.  He played the guitar well, and was always sketching his ideas, rather than trying to explain them.  Jon was the person who got me into synergetics and that way of seeing the physical world, but his understanding of it went much deeper than mine.  I remember a lecture where a visitor was arguing how a modular system would be much more flexible and usable if based upon the Fibonacci series rather than a straight linear progression of 2, 4, 8, etc.  I thought it was compelling, but then I ran into Jon and our teacher, Arthur Loeb, who just shook their heads at the speaker’s naivete, and said well of course, any other irrational number series would work just as well.

Jon and I had both been in academically-oriented high school programs, where the manual arts were discouraged, and then we discovered the metal shop in the Science Center, which was for science students who needed to build apparatus for their experiments.  So we both took metal shop at Harvard, and Jon was quite talented at this, producing precise and elegantly-designed objects, many of which were not for strictly academic purposes.  When another student figured out how if you cut two tetrahedra off a cube of volume 3, you were left with a triangular antiprism of volume 2, Jon figured out that if you sliced that antiprism into 16 pieces, 8 of one shape and 8 of another, they could be recombined into a cube of volume 2.  Our professor was nonplussed, did the math and realized Jon was right, and came up with a grant to pay Jon to spend the summer machining these pieces out of plexiglass. 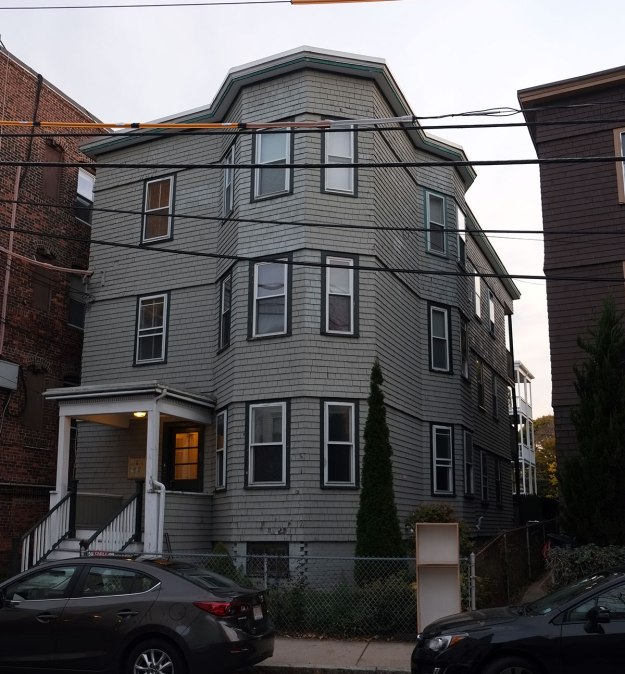 I lived with Jon, John Wenzel and Erec Koch for a year at 66 Dimick St. in Somerville, a true dive of an apartment that rented for $220 a month.  (I went by last week and can report that it is still a dive, but now it is an expensive one.)  The rest of us were working or in school, but Jon was enjoying his post-graduate hiatus, and was determined to stay unemployed for as long as possible.  He hung out with his friends, slept late, played the guitar, sketched and cooked fabulous Chinese food (as part of a Chinese cooking group four of us had formed).  When his money ran out, he got a job as a machinist making medical device parts, until the day he passed a sketch of an idea to his boss, who said, okay, you are now a designer.  Jon’s career took off from there, and since then he has spent his time at the interfaces of design and fabrication, digital and analogue, designing things that the rest of us don’t really understand.

I moved to New York, and Jon and we stayed intermittently in touch, getting together for such events as a Grateful Dead concerts and weddings.

Jon and Debbie were married in the late 1980s, and it was striking to see that two people who shared many characteristics had somehow found each other.  Besides working and raising two children, Debbie creates amazing quilts 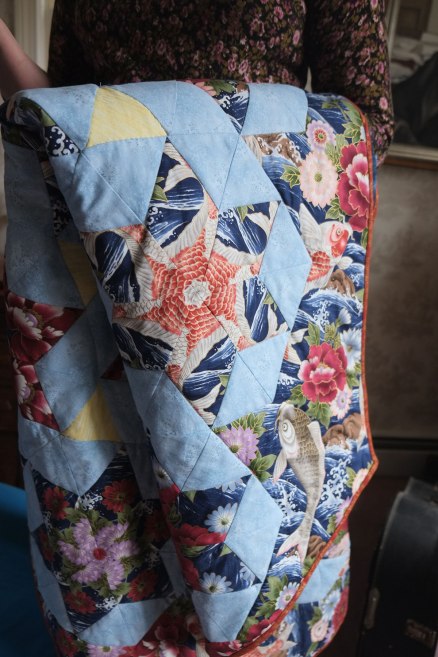 which are technically and conceptually striking (I know something about this from watching Linda make quilts), while also being really beautiful.

Greta and I had a fun couple of days staying with Jon and Debbie in Sudbury, where Greta could satisfy her vicarious pet needs by hanging with the cat, the latest in a series of enormous cats Jon has always had around.  Jon and Debbie of course plied us with great food, either something Jon had invented, or in the best Chinese restaurant they had somehow found in  Framingham.  Once again, it was striking to me to see how old friends had come through the career- and child-focussed years of middle age, and were still the same people you knew long ago.