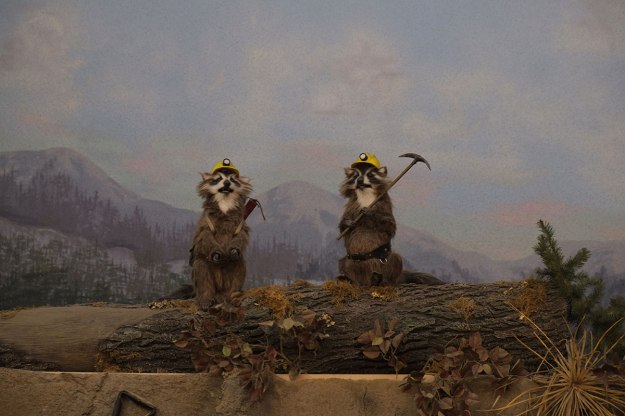 On Monday we were in western South Dakota, which must have the greatest concentration of kitsch in North America.  We’re all familiar with Wall Drug, the fabulously irrepressible, over-the-top apotheosis of western tourist culture kitsch, which evinces a degree of naivete and guilelessness that is rare in today’s corporatized, polished, marketed-to-death tourist environment.  It is a reminder of an earlier era of tourism, when one person’s particular, antic vision drove the enterprise, and it has a unique character that differentiates it from the bland sameness of the mass culture tourist habitat.  Greta was psyched to enter the world of the jackalope, and was not disappointed by its manifestation (although we did think they had missed some good jackalope opportunities). 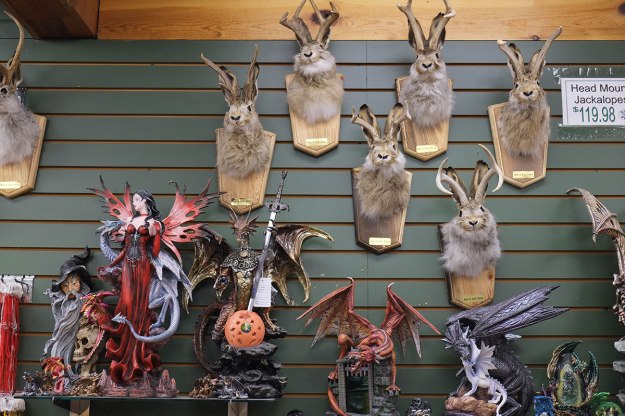 The juxtaposition of jackalope trophies with weird fantasy/erotic imagery. 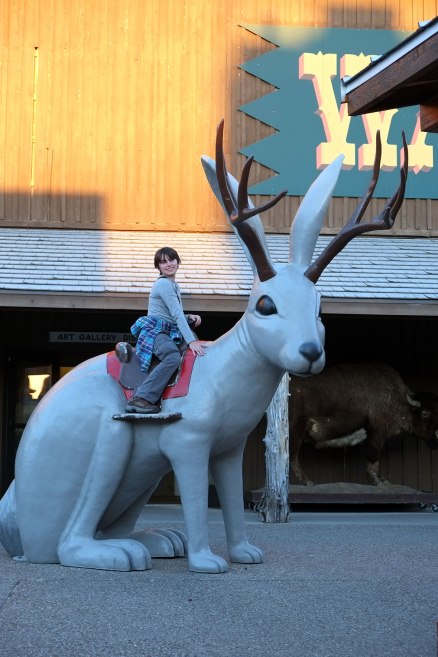 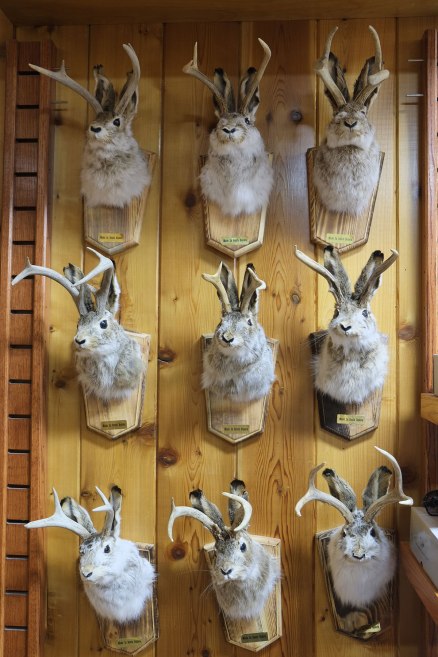 The trophy wall. Greta wisely decided we should not bring one back to Eugene. 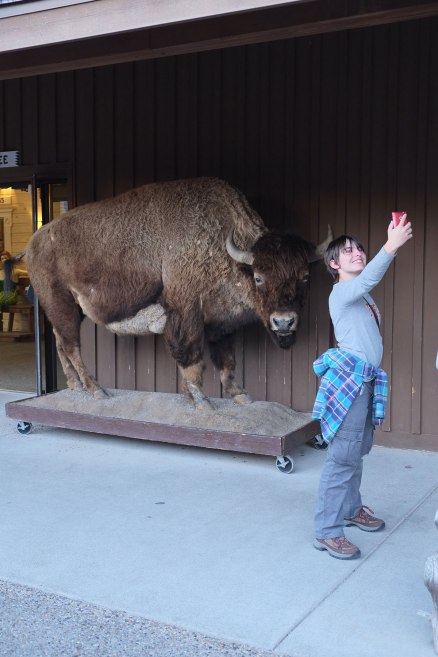 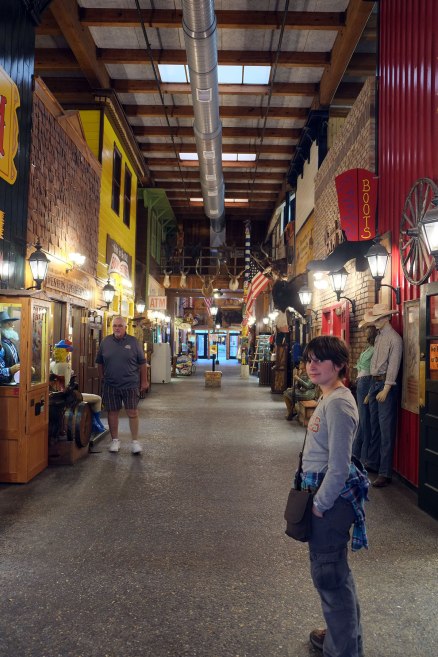 The innocence and manic silliness of this low culture kitsch contrasted with the truly horrifying, high-culture kitsch of Mt. Rushmore.  I remember the Mt. Rushmore of 30 years ago – a simple parking lot adjoining a plain terrace, from which you could gaze up at the sculptures, ponder the meaning of carving large representations of your culture’s prior canon of greatest leaders on a mountain in the center of the sacred hills of the indigenous culture whom we had subdued, and then go back to your car. 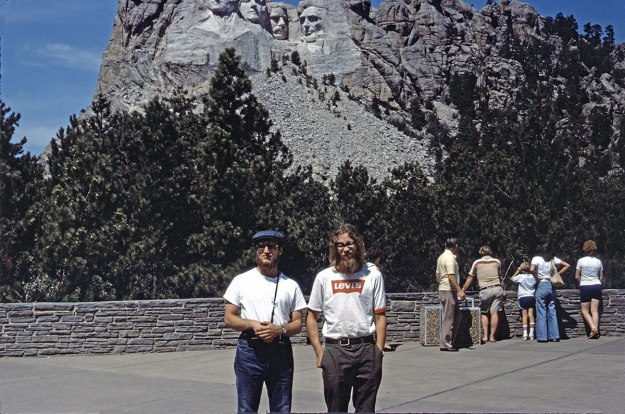 Dan and Norman on our epic 1978 cross-country drive.

It too represented a certain innocence, a time when we believed in the rightness of empire and manifest destiny, but it was what it was, a curious relic of an earlier time and sensibility. 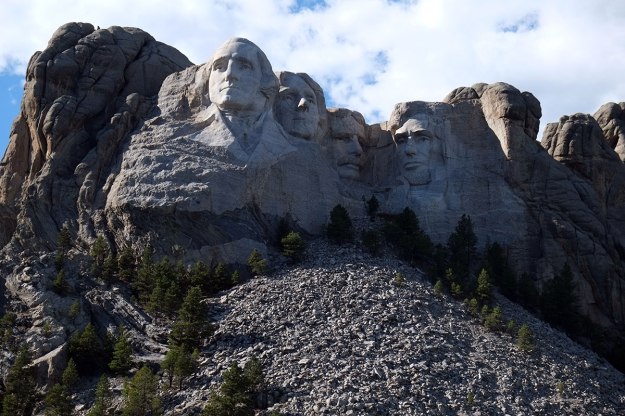 Mt. Rushmore as I remember it

I didn’t recognize the Mt. Rushmore I found on Monday.  A confusing array of roads and ramps leading to parking garages, a very high parking fee to the concessionaire, and an extended axis of pomposity and grandiosity which rivals Mussolini’s modifications to St. Peters. I wandered confused through this landscape, wondering if somehow I had forgotten what it was like, until the truth was revealed by an endless series of inscriptions detailing the generosity of the corporate sponsors.

At some point in the 80s, the triumphalist, end-of-history jingoism of the Reagan-Thatcher era intersected with the neo-classisist pretensions of bad postmodernism, to produce an environment that called to mind the Nazi Reichsparteitagsgelände of Nuremberg, where the scenographic design was used to reinforce the power of the state.  In contrast to the informality of the hills and the intentional asymmetry of the sculpture, a rigid axis crossed by a seemingly endless and repetitive series of screen colonnades had been constructed to contain one’s view, and focus all attention on the end of the axis, which is actually diminished and belittled by the bombastic banality of the surroundings. 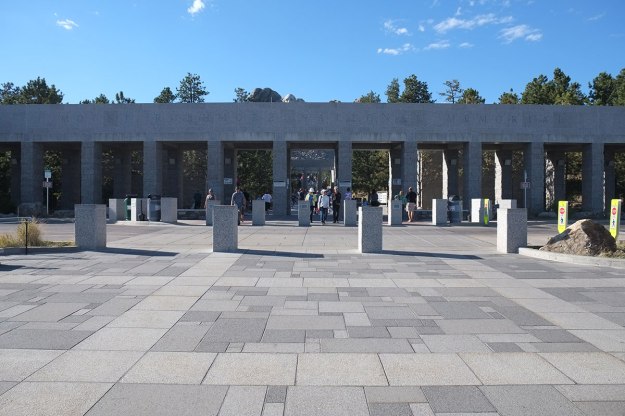 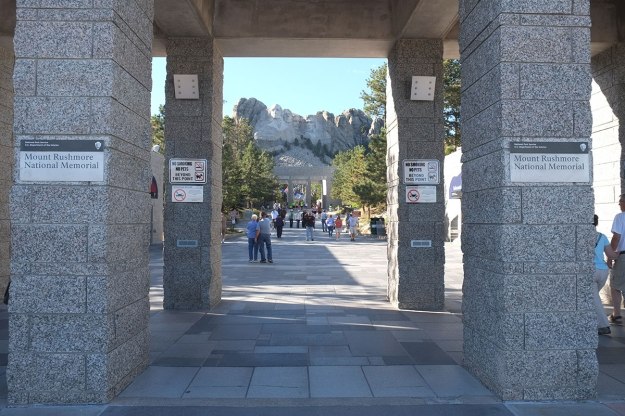 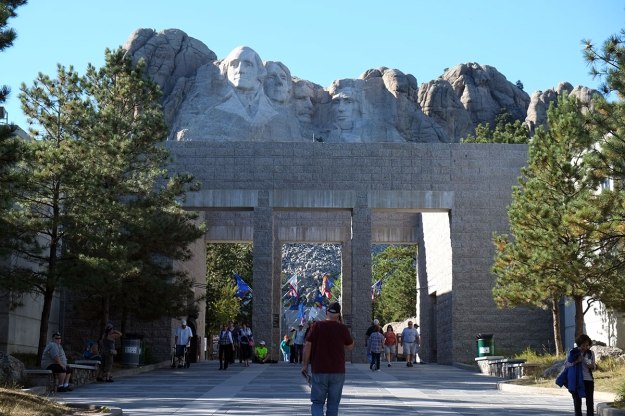 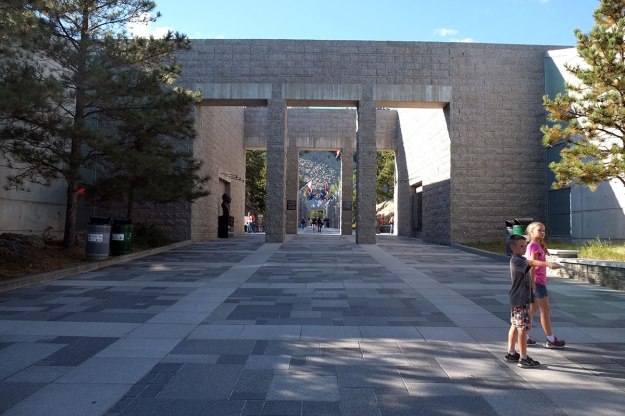 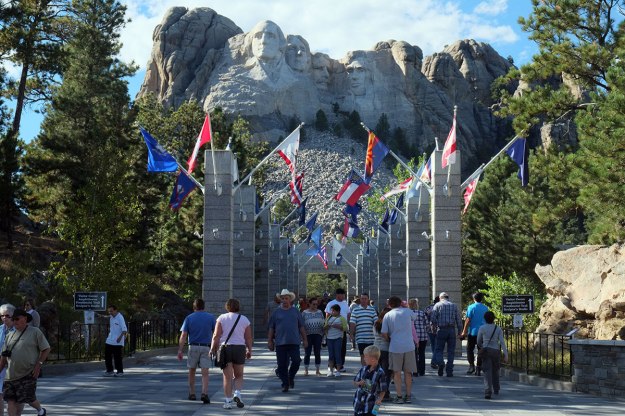 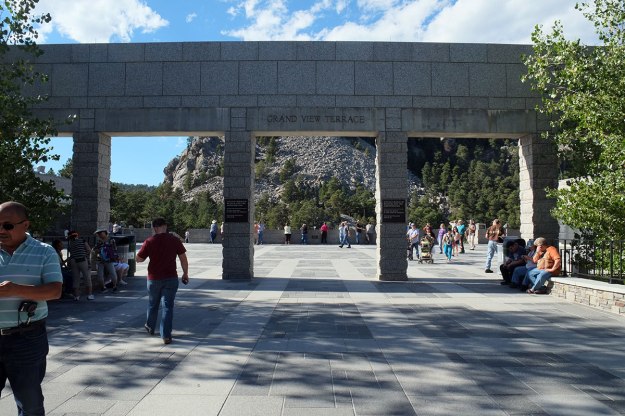 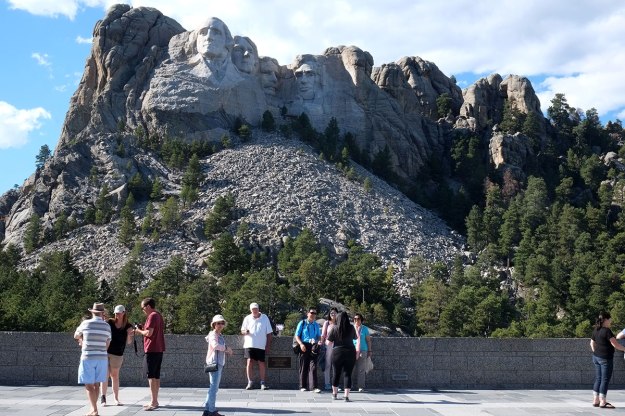 You reach the end of the axis and looking over the low wall, discover an amphitheater sunk below, doubtless for the enactment of patriotic rituals. The echo of fascism seen in the formal design is reinforced by the omnipresent celebration of corporate sponsorship, and the union of oligarchic government and global capitalism is enacted in a manner that is eerily familiar; it appears that Albert Speer Jr. was employed as the architect.  Right at the end of the axial movement there is a juxtaposition of elements that could not be clearer in its meaning – one can only hope that a subversive designer put it there to make sure that we understood the meaning. 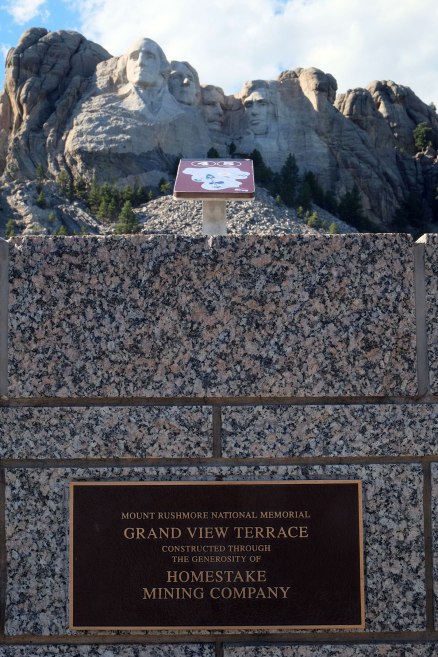 After this deeply depressing exposure to an image which captured what is most hypocritical and corrupt in our society, the carefree kitsch of Wall Drug was a breath of fresh air, a reminder that outside of the military-industrial-corporate hegemony, there are simple human impulses towards showmanship, entertainment and hucksterism. 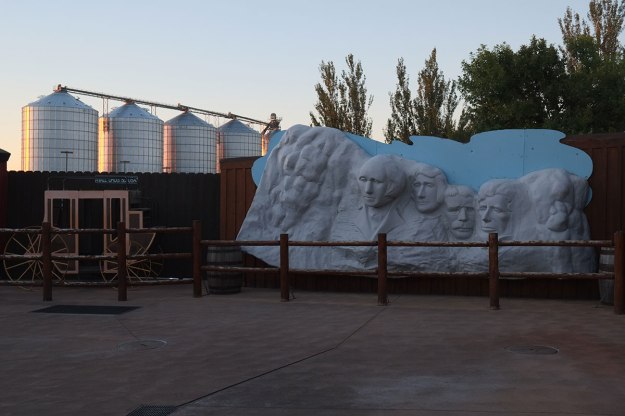 Meanwhile, back at Wall Drug

2020 update:  Five years after this post, its prescience has, alas, only been borne out too clearly.  The difference between the US and Germany is simply that there the dictator and his followers constructed elaborate stage sets for the performance of their dominance, whereas here, the stage set was constructed by an earlier generation of oligarchs, and the tin-pot dictator could simply stroll in and claim it.

1 thought on “Kitsch, high and low”